Eakinomics hereby resolves not to get distracted (too often or too much) by trendy topics or tempting politics, but rather to focus on the genuinely important issues in 2020. To that end, let us do a quick check on the recent performance of labor productivity.

After all, to quote Paul Krugman, “Productivity isn’t everything, but in the long run it is almost everything. A country’s ability to improve its standard of living over time depends almost entirely on its ability to raise its output per worker.” Productivity is the route to rising real wages for all workers.

The chart below shows the year-over-year growth of labor productivity from the beginning of 2016 through the 3rd quarter of 2019. There is good news and bad news. 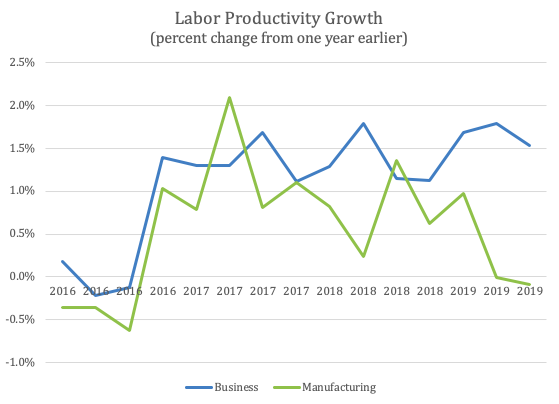 The good news (shown in the blue line) is that since early 2017, business productivity has consistently exceeded 1 percent and is currently running above 1.5 percent. Those figures are a big improvement – nearly doubling the average of 0.8 percent for the five years ending in 2016.

The bad news (green line) is that manufacturing – traditionally a source of productivity advances in the United States – continues to slump. In the 2012-2016 period, labor productivity on average fell by 0.3 percent annually. After offering hope of a rebound in 2018, manufacturing productivity growth has again moved into negative territory.

The administration has placed a priority on manufacturing employment. But without productivity growth, those jobs will not be a ladder to economic prosperity.

The president’s tariffs affect over $360 billion in imports at an additional consumer cost of nearly $70 billion annually.