Checking in on the Farm Sector

Eakinomics: Checking in on the Farm Sector

The tariff war with China has focused attention on the economic status of America’s farmers. What is the state of the farm economy? The table below shows the most recent data from the United States Department of Agriculture (USDA) on the cash income of the farm sector. The most important feature is that farm income in 2017 was already down about 25 percent from the levels of 2012 – and this figure reflected a modest rebound from the low in 2016.

As an aside, these data show cash income, which ignores depreciation and other aspects of full income measurement. Bringing these elements into the computation doesn’t change the basic bottom line of a decline of roughly 25 percent.

Also, in 2017 federal direct payments (which omit federal support of loans and other financial arrangements) were already 11 percent of farm net income. This aid only totaled $11.5 billion, however. The Trump Administration bailout of farmers in the aftermath of the trade war would essentially double the amount of cash flowing to famers. 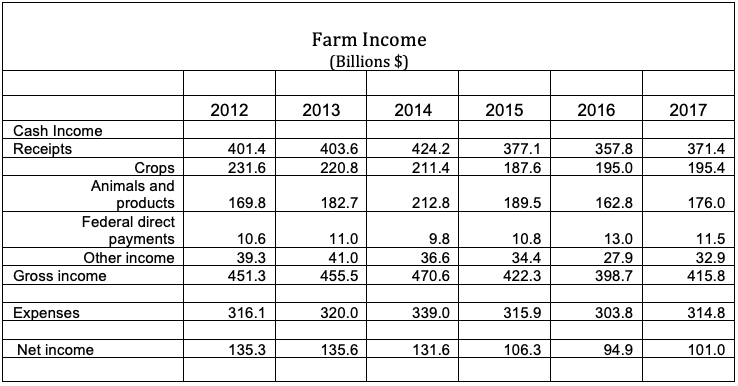 The data also reveal that crops generate 52.6 percent of farm revenue. The remainder is due to animals, poultry and eggs, dairy products, and miscellaneous other sales. Clearly, however, the market for crops is a crucial part of the outlook.

Which crops? The largest single share of revenue – 23 percent – is from the sales of corn. In this regard, the upward trend of the price of corn since late 2017 – a rise of roughly 15 percent – is a promising development (see chart below). 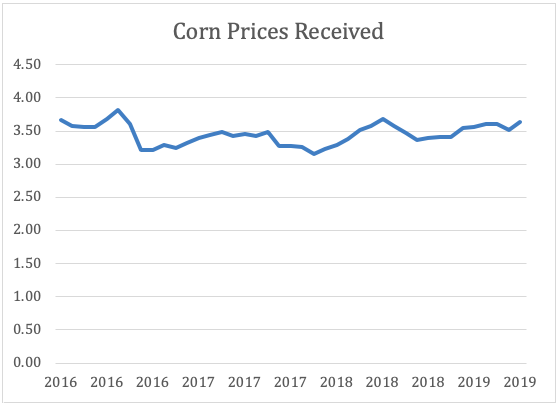 Unfortunately, the same cannot be said for the price received from the sale of soybeans (see below). Soybeans account for just under 20 percent of the farm revenue (in 2017). Since then prices have fallen nearly 15 percent, with an especially sharp decline recently. 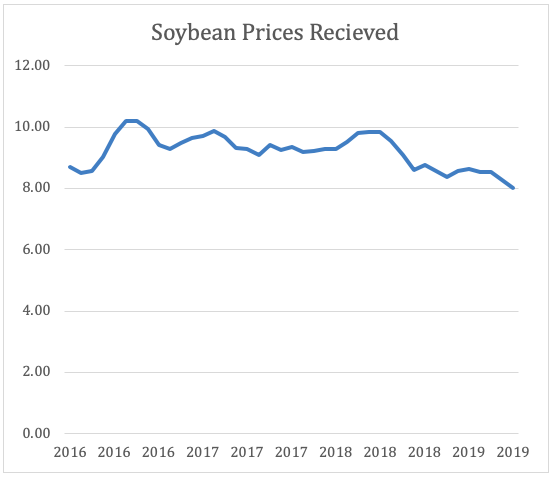 The trade war has taken a real toll on a farm economy that already was not as robust as one would have liked to begin with. The question is whether the damage to this sector of the economy will alter the administration’s strategy in 2019 and 2020.

The June U-6 (the broadest measure of unemployment) increased to 7.2 percent.