Clearing the Air on Vaping Rules

The discussion around e-cigarettes, vaping, and the administration’s (and some states’) action is confusing. It has been characterized in terms ranging from a laudable effort on public health to a heinous assault on personal freedoms and overregulation of the economy. Let’s try to sort it out.

The actions of the Department of Health and Human Services (HHS), the Food and Drug Administration (FDA), and the administration more generally are due to authorities created by Congress in 2009 when it passed the Tobacco Control Act (TCA). For better or worse, the TCA provides the FDA broad authority to regulate tobacco products.

Indeed, from some perspectives the FDA has had a fairly conservative approach to the regulation of vaping products. After the passage of the TCA, there was the usual need to put in place the regulatory framework for the approval of new tobacco products such as e-cigarettes; it is just not fair to ask firms to submit their products for approval without knowing the rules of the road. While these were being sorted out, the FDA used its discretion to announce a series of delays in the full enforcement of the approval process.

This delay made sense. After all, while there is no firm evidence that vaping actually helps people quit nicotine altogether, there is evidence that vaping is safer than a combustible cigarette. Without any clear public-health cost on the other side of the ledger, the FDA let the vaping market continue to grow and evolve.

All that changed with survey evidence of a massive increase in the use of vaping products by teens and middle-school children. As shown in the chart below (reproduced from the HHS website), preliminary data from the National Youth Tobacco Survey (NYTS) indicates that the share of American youth who have used an e-cigarette in the past 30 days grew to 28 percent in 2019, up from 21 percent the year before. This is a dramatic increase from 2017 and earlier.

This increase matters because nicotine is a health risk for teens – it damages the maturing brain and lungs – and a policy response to protect minors from such dangers is an appropriate use of public health authority. 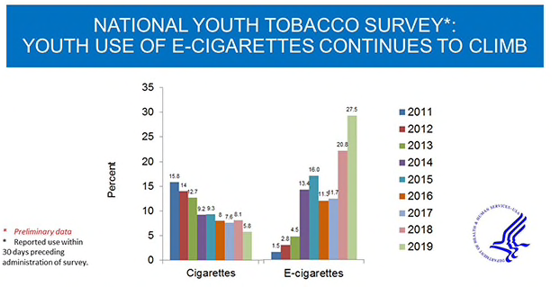 The same NYTS data shows that teens are attracted to fruit, mint, and candy flavors. See below. 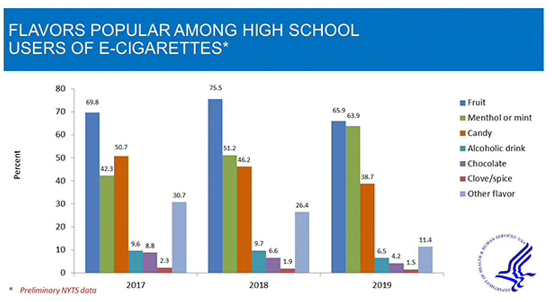 So, what did the administration do? First, it announced that there would be no change for tobacco-flavored e-cigarettes. These will be available for those adults that want to quit smoking cigarettes. Second, it opened the door immediately to any company that wants to have its flavored vaping products approved by the FDA. Finally, it will end enforcement discretion for all flavored products on the market, requiring those products to go through FDA review before coming back to the market.

All in all this seems like a reasonable process to fulfill obligations created by Congress under the TCA. Will there be winners and losers? Yes, but those tradeoffs are not unique. Rather, they are integral to the policy process.