On Friday the Bureau of Economic Analysis (BEA) released its initial estimate of economic activity (“the GDP report”) in the 2nd quarter of 2019. These data are of particular importance to two audiences (well, three if you include Eakinomics): participants in the next Democratic presidential debate and the Federal Reserve Open Market Committee (FOMC, the policymaking committee at the Fed).

First, the numbers. Top-line GDP growth was 2.1 percent (at an annual rate) which, taken at face value, is down substantially from 3.1 percent in the 1st quarter. But inside the numbers, the more recent quarter looks a lot stronger. The 1st quarter was inflated by 0.5 percentage points due to inventory accumulation; the 2nd quarter depressed by 0.8 percentage points by the same source. Tossing out these volatile (and quickly reversed) moves reveals an underlying comparison of 2.9 percent in the 2nd quarter versus 2.6 percent in the first.

Also, the first quarter featured a very weak household sector – personal consumption expenditures (PCE) rose 1.1 percent (at an annual rate); in the second quarter this strengthened to 4.3 percent. Since PCE is 70 percent of spending, the improved strength bodes well in the near term. Among the remaining data, investment in non-residential structures was notably weak, but there is always something in these data.

Stepping back, the overall pace of the economy (measured below in percent change from the same quarter in the previous year) continues to run above the 2016 pace but is down somewhat from the recent peak growth rate in 2018. 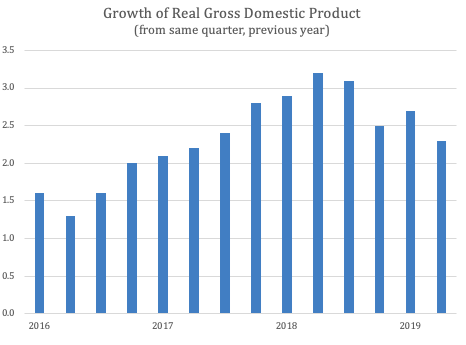 That makes these data an uninviting target for the presidential contenders, since things are better than they were prior to President Trump. One could make the risky bet that the modest softening recently will turn into a full-fledged downturn but the chart on PCE (below) suggests that you need a real disaster to get 70 percent of the economy to go to negative territory. Senator Elizabeth Warren, for example, has been borderline irresponsible in her forecast of an impending crisis, but I don’t expect any others to follow this tactic.  Expect the silence on the economy to be overwhelming in the next debate. 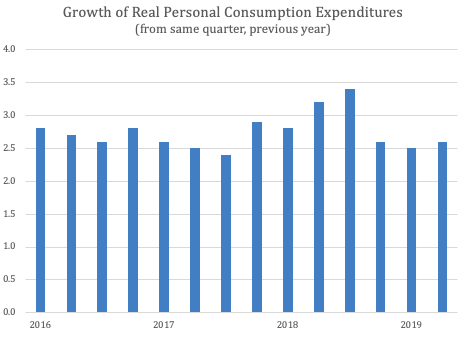 Which brings us to the Fed. Given the lack of real drama in the Main Street economy, why has there been such a fuss over a 25 basis point hike this past December, and why is there a steady clamor for a comparable cut at the FOMC’s July meeting? The answer is that the Fed usually pays too much attention to Wall Street, which currently pays an inordinate amount of attention to President Trump, who also pays a lot of attention to Wall Street in between tweeted head-fakes on policy and some actual bad moves on trade, and so the destructive feedback loop continues.

The only real reason one can imagine an argument for a rate cut being made is that relative softness in inflation. The chart below shows the year-over-year inflation as measured by prices for core (non-food, non-energy) PCE that are actually determined by markets. But that also seems to be a stretch; inflation is down only modestly in the past couple of quarters and in no way threatens actual deflation.

Friday’s report was a solid check-in on the health of the economy. It will lead presidential contenders to respect the data and do nothing, but may not convince the Fed to follow suit. 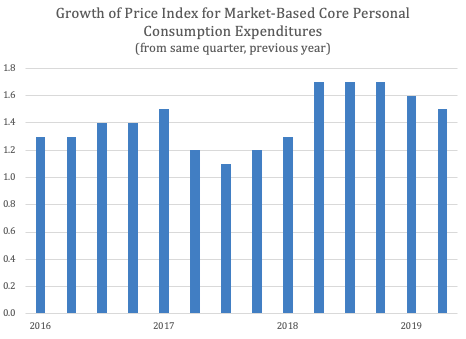 This year, almost 700,000 individuals have illegally crossed the southern border — the largest number of illegal border crossings since 2007.

Expediting Infrastructure into the Unknown

The FDA and COVID Testing Priorities

Eakinomics: The FDA and COVID Testing Priorities This Week in Virology (TWiV) is a podcast on viruses – “the kind that make you sick,” as they…

What Remains in Reserve?