Inflation and the Stimulus Debate

Eakinomics: Inflation and the Stimulus Debate

Yesterday I testified before the Senate Committee on Banking, Housing, and Urban Affairs regarding the American Rescue Plan (ARP). My basic message was simple. To date, everything that Congress has done to respond to the economic fallout of the COVID-19 pandemic has been appropriately timed, appropriately scaled, and appropriately designed and targeted. In contrast, the ARP is poorly timed, ridiculously scaled, and horrifically designed and targeted. You can read the remainder of my praise here.

As I mentioned, the ARP is very poorly timed. It is no longer the spring of 2020 when the economy was contracting at an annual rate in excess of 30 percent. Instead, it grew strongly through the second half of 2020 and is projected by the Congressional Budget Office (CBO) to grow at a rate of 4.6 percent in 2021. Indeed, the Federal Reserve Bank of New York’s Nowcast puts the first quarter of 2021 at 6.7 percent, while the Atlanta Fed’s GDPNow clocks in at 9.5 percent. In sum: There is no recession, the economy is growing strongly, and there is little case for stimulus. Oh, and by the way, Congress passed $900 billion in support for the economy at the end of December. It is hard, at best, to make the case that there is an urgent need to move now.

It is also ridiculous in scale. The $1.9 trillion is roughly $1.6 trillion in 2012 dollars, which is significant because CBO estimates that the economy is roughly $450 billion (in 2012 dollars) below its potential level of output and income. The theory behind stimulus is that each $1 of stimulus will produce more than $1 of additional gross domestic product (GDP). Taking the proponents’ theory at face value the ARP is WAAAAAAAAYYYYYY too large to solve a $450 billion problem. Indeed, if one assumes that each $1 of stimulus produces only $0.50 of GDP, the economy stills “overheats” – runs past its potential – by the end of 2021.

The usual argument, which has made its way into the news media and investment community, is that it will ignite inflation. That would ultimately force the Federal Reserve to tighten somewhat, and financial markets are always vigilant to monetary policy moves. Perhaps this chain of events would happen, but I doubt it.  A lesson from the great inflation of the 1970s is that you have to run the economy very hot for a long time to generate significant inflation.

To see this, look at the chart below. The blue line is the quarterly output gap – the difference between actual GDP and potential GDP measured as a percentage of potential GDP. The orange line is quarter consumer price index (CPI) inflation (at an annual rate), while the brown line is the “core” CPI inflation, which excludes food and energy. In all cases, the entries are a 4-quarter moving average. 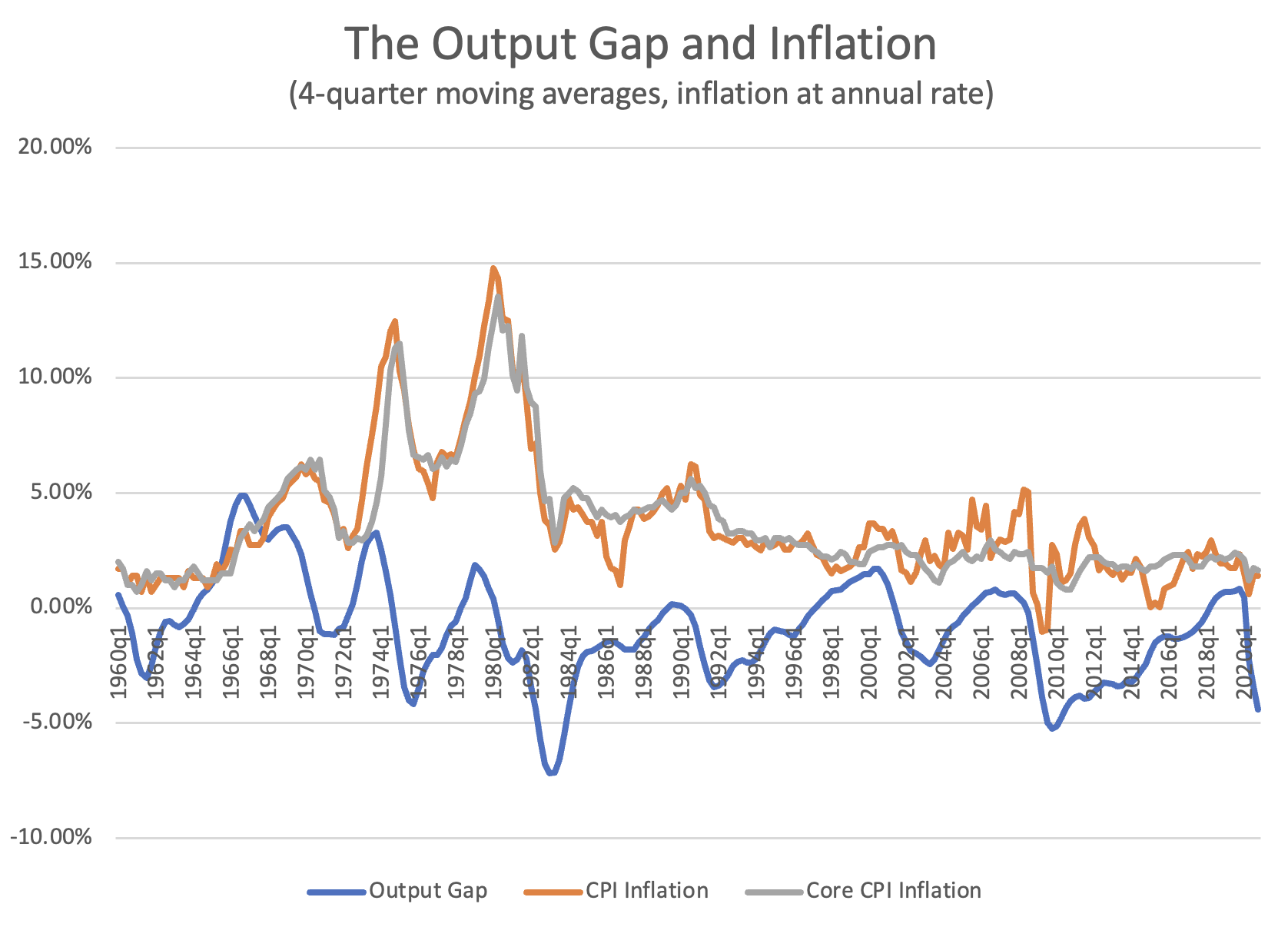 What do we learn? We learn that in 1964 and continuing to 1970, the economy ran hot; indeed, the output gap averaged just under 3 percent. In the process, inflation ramped right up from negligible to significantly above 5 percent.

This observation is important because inflation is negligible now. The ARP would definitely drive GDP above potential, but only for a short period. It would be nothing like the experience of the 1960s. The inflation of the 1970s is dominated by oil price shocks that drove the top-line into double digits. More illustrative of the point is the long period from the mid-1980s to the present in which the output gap has rarely be significantly positive for sustained periods and inflation has faded away.

Does that mean there is no cost to excessive stimulus? No. Instead, I think the most likely channel will be asset prices, not prices of goods and services. During 2020, incomes continued to grow and the massive stimulus further supported disposable income. The saving rate jumped sharply and remains elevated. And where did those savings go? Into asset purchases. It is hardly surprising that house prices are up, equity prices are up, and Bitcoin is booming. Imagine the outcome if another $2 trillion floods into financial markets.