In retrospect, the actions of the administration and congressional Republicans constitute a clear, pro-growth sequence of policies. The sequence began with the House-passed American Health Care Act – the health care bill that reformed two major entitlement programs and cut taxes by $1 trillion – continued with both legislative and administrative deregulation, included the Tax Cuts and Jobs Act (TCJA), and culminated with the administration’s efforts – notably the U.S.-Mexico-Canada Agreement (USMCA) and the China Phase 1 trade deal. In short, entitlement reform, regulatory reform, tax reform, and trade reform.

In the interest of (somewhat) brevity (and a desperate attempt to not alienate everyone first thing in the morning), I’m going to skip a recap of the failed health care effort. I have strong views, but they are for another time. And I will pass on grading the trade effort. It has always been an issue of enduring short-term pain in the hopes of longer-term improvements. Time will tell.

But it is worth taking a look at the remainder. There was substantial early congressional action on Obama-era regulations using the Congressional Review Act. The main effort, however, has been the administration’s imposition of regulatory budgets. As shown below (all data are from AAF’s regrodeo.com), the difference between the implicit taxes levied in the Obama era (2016) and the Trump era (2017-2019) is like night and day. One has to believe that the business community – small and large – noticed the difference and noticed it quickly in 2017. It was an immediate and upfront push for the economy. 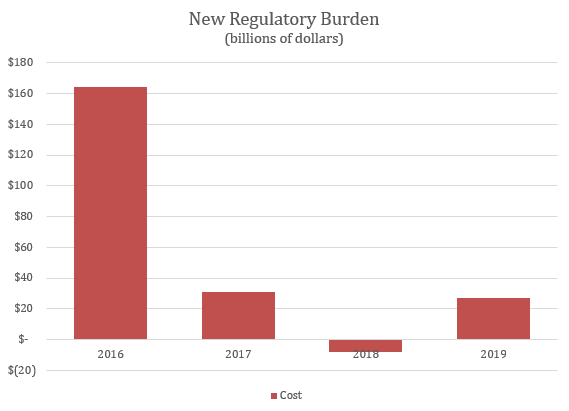 The next step was tax reform in December 2017 (although it is hard to date when the impact of an expected tax reform would start to occur). It is useful to remember the bipartisan acceptance of the need for tax reform, especially corporation income tax reform.

The U.S. corporate tax code had remained largely unchanged for decades, but other countries had not stood still. The result was the highest statutory rate (35 percent) in the developed world, as well as an average effective tax rate of 27.7 percent, compared to a rate of 19.5 percent for foreign-headquartered counterparts. In addition, the United States had clung to a worldwide system of taxation – at the highest rate. Thus, the only way to avoid being at a competitive disadvantage was to not repatriate the funds. This system distorted the international behavior of U.S. firms and essentially trapped foreign earnings that might otherwise be repatriated back to the United States.

Again, other countries had busily been shifting toward territorial systems that to a great degree exempted overseas earnings. Of the 34 economies in the Organisation for Economic Co-operation and Development, for example, 28 have adopted such systems, including recent adoption by Japan, the United Kingdom, and New Zealand. The result? It made no sense from a tax perspective to have a U.S.-headquartered corporation, and the issue of so-called “inversions” remained at the forefront of tax policy and politics.

The TCJA has been an enormous success in addressing these problems. In the immediate aftermath of its passage, enormous sums of overseas earnings were finally repatriated to the United States – and the amounts remain elevated by historical standards (see below). 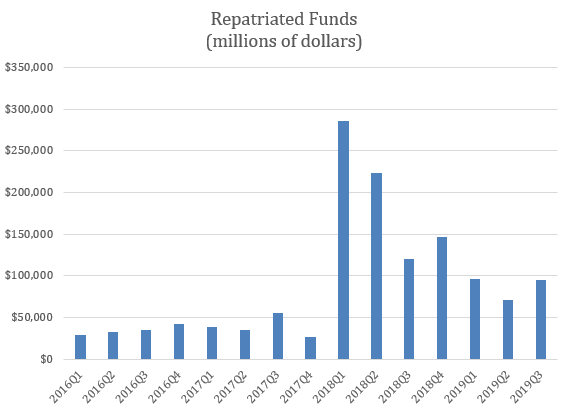 The success regarding inversions is even more striking. After years of having five to six prominent companies annually depart the United States, inversions have simply stopped.

Of course, the bottom line is whether the plan has produced better growth. Certainly, the top-line economic growth has improved. 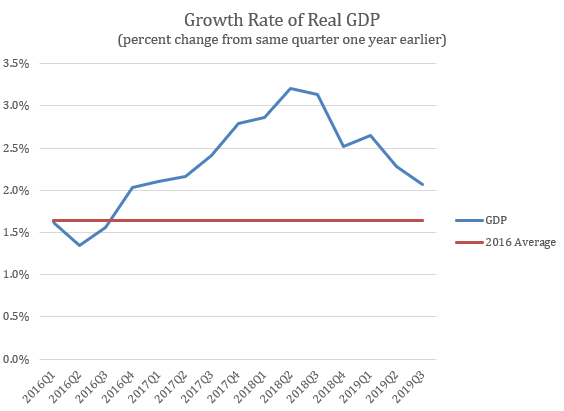 While remaining above the 2016 jump-off point, the growth rate has tailed off in 2019. This drop coincides with slower business investment (below) and, especially, the arrival of a full-blown trade war. 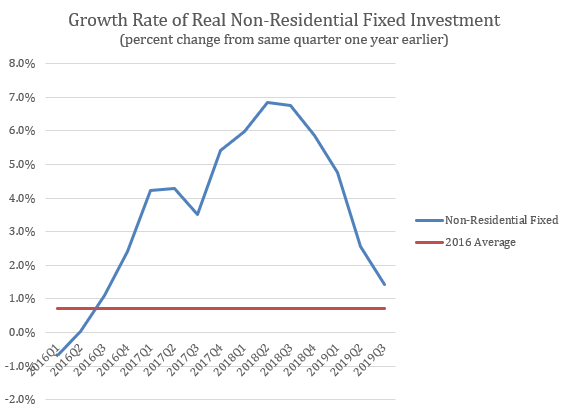 Looking forward, there will be a clear incentive by the 2020 Democratic presidential candidates to paint the administration and particularly the TCJA as failures. But the numbers simply don’t support that narrative. Instead, the economy has benefitted enormously from regulatory reform and tax reform. It would have benefitted even more from entitlement reforms. And one can only hope that it will reap the benefits of the trade reforms going forward.

Federal agencies combined to publish $27.3 billion in net regulatory costs in 2019, the largest amount of the Trump Administration.

Growth, Poverty, and the Safety Net

Eakinomics: Growth, Poverty, and the Safety Net  The New York Times published a nice piece entitled, “Millions of Americans Have Moved Off Assistance.…