One of the signatures of the COVID-19 recession is its unevenness across sectors of the economy. While the services sector, especially leisure and hospitality, was flat on its back, other sectors have prospered. Among the most notable has been the residential housing boom in the United States. According to house price indices based on mortgage purchases by Fannie Mae and Freddie Mac, house prices rose 5.3 percent between March 2019 and March 2020. In sharp contrast, over the year from March 2020 to March 2021 the growth in house prices more than doubled to 12.9 percent. The values reflect a sharp rise in the pace of new home sales; sales growth was 66.8 percent from March 2020 to March of this year, in contrast to a decline of 12.6 percent during the previous March-to-March period. Finally, this demand has translated into additional construction (and upward pressure on construction costs). Housing starts rose 5.5 percent from March 2019 to March 2020; the most recent March-to-March growth is 37 percent.

The last time the United States had a housing boom – the go-go years of the early 2000s – house price appreciation was largely concentrated in the so-called “sandy states” such as California, Nevada, Arizona, Florida, and others. The interior states had a boom in the origination of subprime mortgages, but it was not accompanied by a vibrant housing market.

As is the rule for all things pandemic, the 2021 housing market looks very different.  As shown in the table below, house price appreciation between 2020 (March-to-March) and 2021 (March-to-March) accelerated in every state. The smallest increase – 0.9 percentage points – occurred in Washington DC, while the largest increase – 14.4 percentage points – took place in Connecticut. Close behind Connecticut is Idaho, up 14.1 percentage points to a stunning growth rate of 26.4 percent. More generally, the Idaho-Montana-Utah region stands out for its house price appreciation. 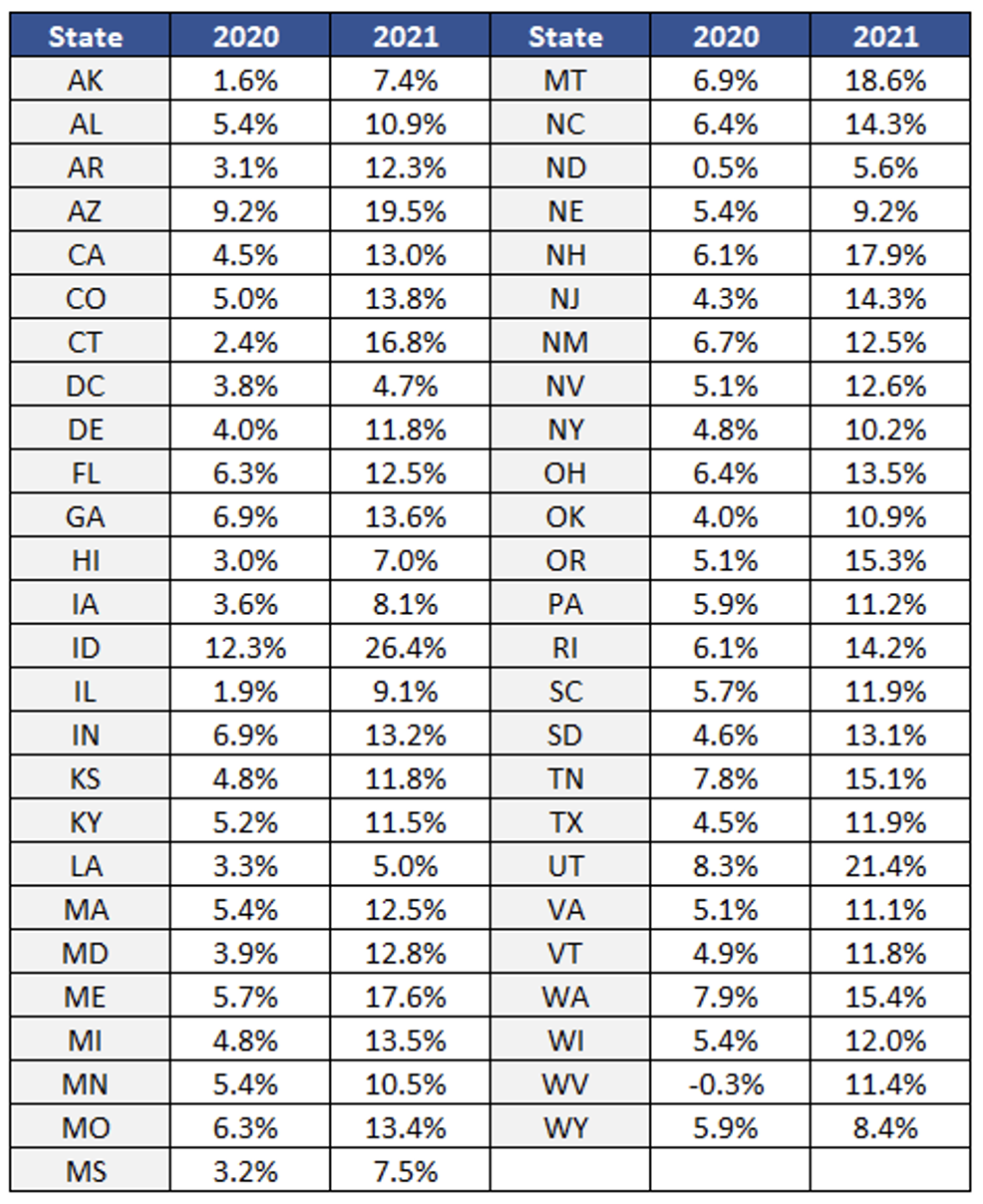 A residential construction boom can have powerful knock-on impacts because building a new home also means buying HVAC equipment, appliances, carpets, asphalt, and myriad other goods. Given the massive fiscal over-stimulus that is already in place, keeping a watchful eye on housing developments will complicate life for the Federal Reserve.

Eakinomics: Boeing-Airbus and Trade Tom Lee has updated his research on the long-running Boeing-Airbus dispute. The good news is that you don’t…

Eakinomics: Biden’s Supply-Side No-Growth Policies The president’s economic policies hinge on two risky bets. The first, at the heart of his American…

Eakinomics: The Unified Agenda The Obama Administration became notorious for dropping news about its expensive regulations late on Friday afternoons.…