The Labor Market and Wages

Eakinomics: The Labor Market and Wages

The June employment report “defied consensus predictions and showed strong labor market growth” (in the words of AAF’s Gordon Gray). But this did not stop people from finding some fault. MarketWatch reported, “Wage growth has tapered off recently despite the tightest labor market in decades, suggesting most workers have gained limited power in wresting higher pay from employers,” while The Washington Post opined, “The one yellow flag in the jobs report was wages. While companies say they have to raise pay and offer more perks to hire and retain workers, wage gains continue to be weaker in this expansion than they were in the 1990s boom. Average hourly pay grew 3.1 percent in the past year, above the cost of living, but a bit weaker than economists were expecting.”

Is this assessment fair?

To begin, at this point in the economic cycle, it is appropriate to move away from the number of jobs created as the litmus test of a good employment report. After all, the population is growing slowly (0.7 percent annually), so the only sources of rapid employment growth would be either a rising rate of labor force participation or a falling unemployment rate. The latter is essentially out of the question – unemployment is very low already at 3.7 percent — and the aging of the U.S. population suggests the former should fall and not rise.

So, one metric of success is labor force participation. Just keeping it constant would be an accomplishment. The second, and probably most important, is rising real (inflation-adjusted) wages. Notice, however, that these work in opposite directions, as a flood of new entrants into the labor market will likely dampen the upward pressure on wages and vice versa.

There are two main measures of wages. The first, available in the employment report, is average hourly earnings. It has the virtue of being published monthly, but it does not adjust for the mix of skills in the market and misses all non-wage compensation. It is shown as the red line in the chart (below, and adjusted to a quarterly basis). I focus on the earnings of “production and non-supervisory workers” — that is, the non-management. Average hourly earnings have clearly moved up over the past two years and — at least to my eye — are not falling off.

The second measure (shown in green) is total compensation (wages plus benefits) from the Bureau of Labor Statistics’ Employment Cost Index. This is a much more sophisticated measure, but it is only published quarterly. It also is rising more rapidly than two years ago, but the pace of increase is a bit below 3 percent still.

The question for the future is whether inflation stabilizes and wages rise faster yet, or whether wage growth continues as present with continued muted inflation. Either way, the labor market is delivering higher real wages. 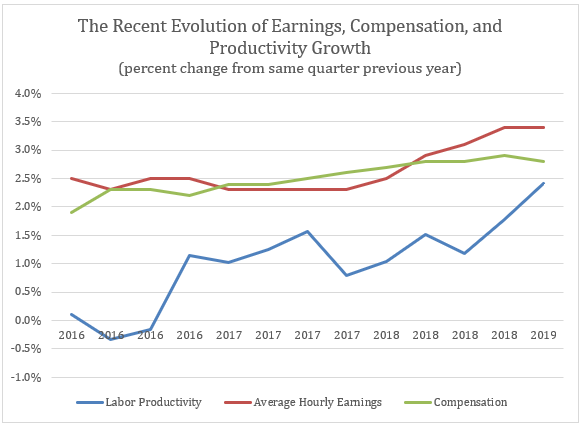 COVID-19 and Communities of Color

Eakinomics: COVID-19 and Communities of Color I testified yesterday before the House Ways and Means Committee on the topic of “The Disproportionate…