Earlier this week, I testified before the House Committee on Ways and Means regarding the “Disappearing Corporate Income Tax.” A key part of the debate over the Tax Cuts and Jobs Act (TCJA) is whether it “worked”: Did it improve incentives for business investment and raise the pace of economic growth? Here’s the debate in a nutshell.

The graph below shows the year-over-year growth in gross domestic product (GDP) each quarter since Q1 of 2016. Recall that TCJA passed in Q4 of 2017. Detractors, notably fellow witness Jason Furman (chairman of the Council of Economic Advisers during the Obama Administration), point to the fact that Q4 of 2016 and 2019 are roughly the same and claim that TCJA was just a “sugar high” tax cut that had some short-term effects but no long-run benefit. 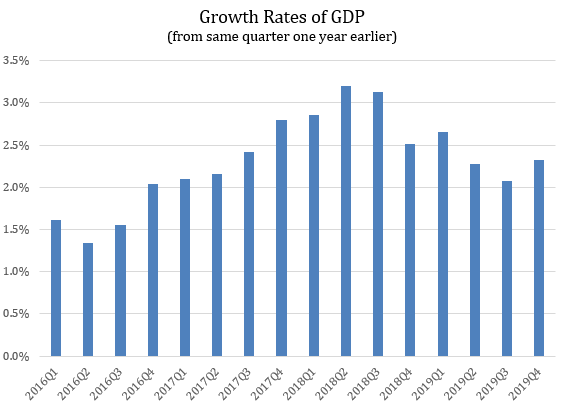 In contrast (see below), I argue that TCJA did make important changes. The ramp up and down in overall growth seen above is directly the result of a sharp increase in investment that raised growth exactly as advertised. Jason counters by arguing that investment in Q4 2016 and Q4 2019 are roughly the same (and by ignoring the intervening boom). 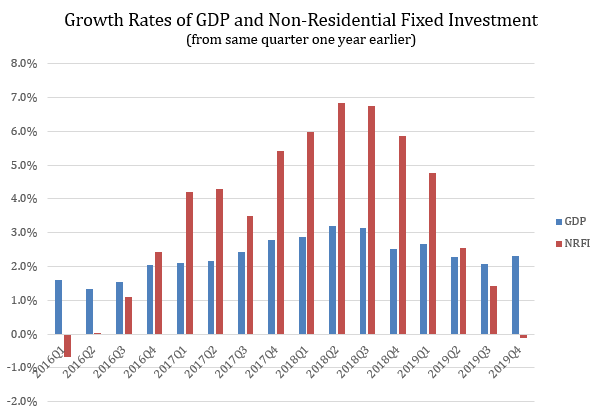 It is just wrong to claim that the TCJA did not affect the growth rate of investment, but there remains the question of why it did not continue at a high level. Well, as shown below, President Trump chose exactly the peak, mid-2018, to start a whopping, humongous trade war with China. The resulting global downturn in manufacturing, uncertainty in the outlook for location decisions, and loss of executives’ confidence sent investment plummeting. 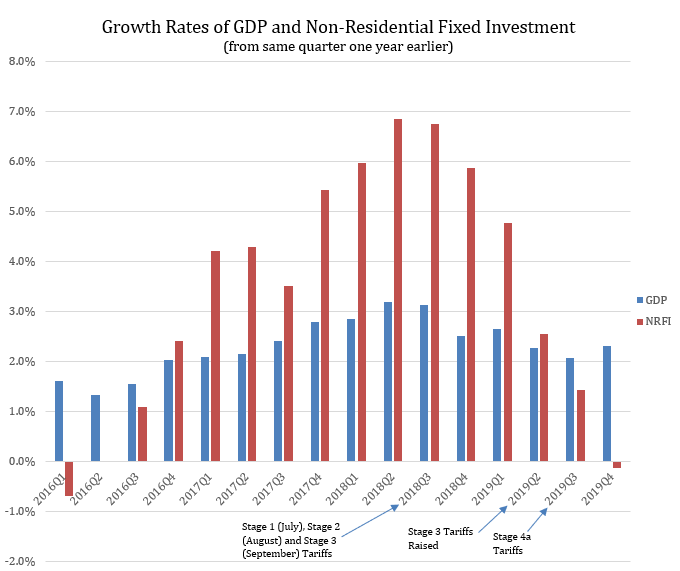 The TCJA worked fine, but trade policy unworked it even more. Hopefully damaging trade policy is in the rearview mirror and the benefits of a pro-growth tax reform will once again become apparent.

Eakinomics: A Look Back at Pressing Health Policy Issues On the eve of the pandemic, AAF commissioned polling research by OnMessage Inc. to better…

Eakinomics: Policy Design and CARES The U.S. economy is suffering from massive, cascading cash-flow crunches. With the arrival of the virus, large…

Eakinomics: Recent Trends in Insulin Prices Insulin was the poster child of the drug price wars in 2019 and early 2020, and the key facts are laid…

The February jobs report was an excellent economic story quickly forgotten. With the coronavirus pandemic looming, it was reassuring to see that the U.S.…