Productivity growth is perhaps the most important indicator of economic conditions. As labor productivity grows, firms can pay their workers more and cover the costs without raising prices. In the near term, this dynamic is the definition of non-inflationary growth and greater international competitiveness. Over the longer term, this situation means rising real wages that feed a higher standard of living. There is (or at least should be) no constituency that opposes rapid, sustained productivity growth.

The recent performance of labor productivity growth is shown below for all private business, non-farm business, and manufacturing. Three features stand out. First, across all sectors the average growth was noticeably higher (on average) before the Great Recession than since the recovery began. Second is the reminder that productivity is pro-cyclical – hence the sharp decline during the recession and spurt of productivity at the start of the recovery.

The third is the divergence between the performance of manufacturing versus the rest of business after 2016. Productivity growth averaged below 1 percent annually for years leading up to 2017. One of the bright spots in the Trump Administration’s record was a recovery in productivity growth to a nearly 1.5 percent annual rate. But this trend has not held for manufacturing productivity, which averages under 1.0 percent and has been declining in 2019. 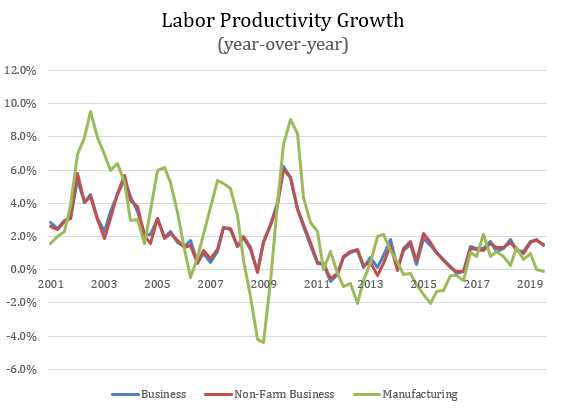 What is going on? After all, the president’s rhetoric focuses on manufacturing and his tax, regulatory, and trade policies are seemingly driven by manufacturing considerations. Mechanically, there are two possibilities. It could be the case that weak investment has produced slow growth in capital per worker, leading to slow labor productivity growth. Or, it could be that workers are getting more capital but continue to operate with the same quality of capital as in the past, using the same methods as the past, and existing in the same business models as the past. That latter notion of productivity – advances in output that are not driven by the sheer quantity of inputs – is known as multi-factor productivity. 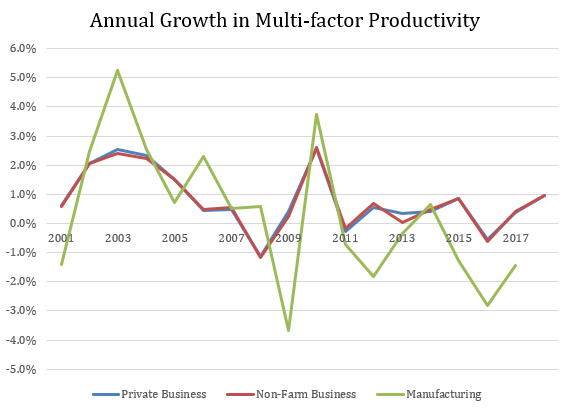 Revisiting the President’s Aid to the Unemployed

Eakinomics: Revisiting the President’s Aid to the Unemployed Recall that when the federal supplement to unemployment insurance benefits lapsed on…

Regulation and the Robots

Eakinomics: Executive Disorder This past Sunday, the president interrupted the return of the National Football League to issue two executive orders…

Eakinomics: Climate Change and Financial Stability This past Wednesday the Commodity Futures Trading Commission (CFTC) released a report it had commissioned…