The degree to which any given president is responsible for the U.S. economy, or even more plausibly, the federal budget, is usually overstated. Presidents simply don’t have anything like the ability to singly control the U.S. economy, tax revenues drawn therefrom, or the spending those revenues finance. Instead, presidents make policy decisions that affect, to varying degrees, the economy and the federal budget that’s built upon it. This reality is typically elided in assessing the economic and fiscal legacies of past executives.

With fiscal year 2020 now concluded, observers are no doubt evaluating the fiscal legacy of the current administration. The debt at the beginning of President Trump’s term stood at just under $20 trillion. Today it’s nearly $7.1 trillion higher. But that’s an incomplete picture that ignores the fiscal outlook at the beginning of the Trump Administration, and it hardly describes the nature of the debt accumulation. Instead, it’s useful to decompose the deficit outlook to examine how much of the deficit is explained by new policy choices, and how much is animated by economic and other factors.

Helpfully, the Congressional Budget Office (CBO) undertakes this exercise when it updates its 10-year budget projections so observers can distinguish how much legislation has increased the deficit (or *cough* reduced the deficit) as opposed to the effects of the economy or other factors. 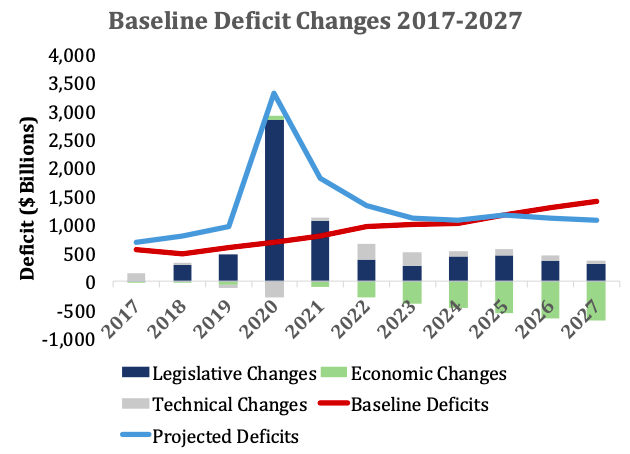 The chart above decomposes the contributions to the change in CBO’s deficit projections since January 2017, when Trump took office. One can see that in addition to the large contributions to the deficit changes from legislation, economic changes and technical change can contribute to increased and decreased projected deficits.

This exercise is of course only a partial deconstruction of the deficit outlook. It does not, for example, trace back the economic changes to specific policies. For example, all else equal, the tax changes from the Tax Cuts and Jobs Act (TCJA) likely increased economic growth, but those changes can’t be distinguished within these data. Nor does it speak to the necessity of a given budgetary change. There is a lively debate as to whether the TCJA and past budget agreements should have been deficit financed. There has been essential unanimity that the federal response to the COVID-19 pandemic should be large and deficit financed. CBO’s budget projections treat those the same – as numbers on a spreadsheet. Nevertheless, some additional precision in identifying those budgetary changes over which a president has meaningful agency (i.e. signing legislation) is more valuable than the reductive assumption that presidents are directly responsible for the deficit outlook in general.

Of the roughly 8 million Americans who are dependent on prescription insulin, 27 percent report difficulty affording their prescription.

Eakinomics: The Housing Boom One of the signatures of the COVID-19 recession is its unevenness across sectors of the economy. While the services sector…

Eakinomics: Inflation Eakinomics has had its eye on the inflation outlook for a while, but yesterday’s Bureau of Labor Statistics (BLS) report on…

Eakinomics: Immigration Reform Today I will be testifying at the Senate Judiciary Committee in a hearing by the Subcommittee on Immigration, Citizenship…

A Retrospective on the Paycheck Protection Program

Eakinomics: A Retrospective on the Paycheck Protection Program One of AAF’s most popular products, week in and week out, is Thomas Wade’s tracker on…