Where Did $1 Trillion Come From?

Eakinomics: Where Did $1 Trillion Come From?

Negotiations over the next phase of the COVID-19 recession response have broken down, in part, over a large disagreement about aid to state and local governments. Democrats have stuck to the $1 trillion figure in the House-passed Health and Economic Recovery Omnibus Emergency Solutions (HEROES) Act, while Senate Republicans offered no additional funds beyond the $150 billion that was passed in the Coronavirus Aid, Relief, and Economic Security (CARES) Act.

What is the right number? I have no idea. But I did a simple calculation to get some sense of the order of magnitude of what might be at stake. Recall that a core rationale for providing funds to the state-local sector is that the recession has damaged the tax bases of state and local governments. With that in mind, take a look at the chart (below). The top line is total receipts for the state-local sector under the assumption that the growth rate from the start of 2017 to the first quarter of 2020 continues until the end of 2021. This is labelled “Projected Trend.” 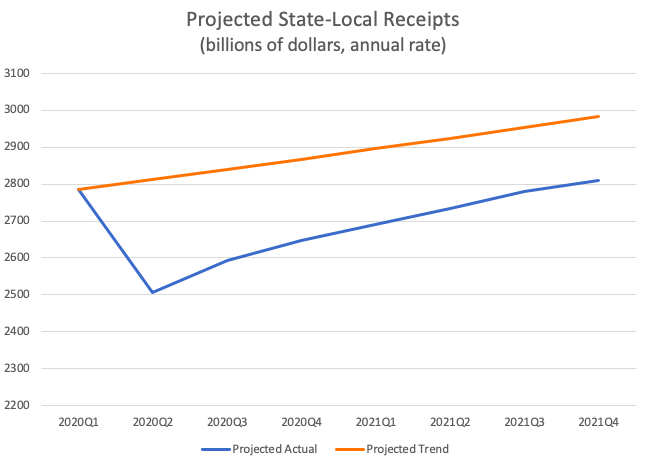 Obviously, this is not going to happen. The second line in the chart, labelled “Projected Actual,” is a guesstimate on the actual overall receipts. It is computed by assuming that receipts are the same fraction of gross domestic product (GDP) in every quarter from 2020Q2 to 2021Q4 as they were in the first quarter of this year. GDP is assumed to follow the most recent projection of the Congressional Budget Office.

Starting from the common starting point in Q1 of 2020, the two projections diverge. Adding up the cumulative divergence over the 7 quarters yields actual receipts roughly $380 billion less than would have been collected by continuing recent trends. Since the CARES Act allocated $150 billion, the unmet “need” is on the order of $230 billion.

Now, $230 billion is not exactly chump change, but it is a far cry from $1 trillion.

How might my crude, back-of-the-spreadsheet estimate understate the need? One issue is that I use data from the National Income and Product Accounts, which take a different approach to some sources of receipts (e.g., sales by governments) than the accounting systems of governments. Unfortunately, the treatment of the big revenue item – tax receipts – is identical, so this doesn’t seem a promising explanation.

Alternatively, one could have a more sophisticated approach to projecting the counterfactual receipts, the actual future receipts, and the gap between them. Again, yes, this is a possibility. But does it really impact the gap by a factor of 4? That seems too large.

A third possibility is simply to count more years, adding up the gap through 2022, 2023, or even longer. That will certainly make the numbers larger. But it also raises the policy question, how long does the federal government attempt to freeze in time the structure of state-local finances? At some point, surely, states and localities will have to restructure in the same ways that private industries will. How long should that moment be put off?

Presumably a few adults will be found, negotiations will resume, and the state-local funding issues (among others) will get settled. But it sure seems like it should end up well short of $1 trillion.

Only six percent of the population currently lack access to fixed broadband service according to the most recent Federal Communications Commission Broadband Progress Report.

82 Years Is Long Enough to Wait

Eakinomics: The Long-Term Budget Outlook In the midst of the COVID-19 pandemic, with the economy climbing out of the sharpest downturn in U.S. history…

And Now For Something Really Depressing

Eakinomics: And Now For Something Really Depressing Pandemic and recession got you down? A bit hot about the West Coast burning up? Can’t shake the…

The Future of the ACA (Again)

Eakinomics: The Future of the ACA (Again) An opening on the Supreme Court in advance of it hearing arguments in Texas v. U.S. has raised once more…