Mr. President, I could not help but notice your pair of tweets early yesterday:

The Federal Reserve should get our interest rates down to ZERO, or less, and we should then start to refinance our debt. INTEREST COST COULD BE BROUGHT WAY DOWN, while at the same time substantially lengthening the term. We have the great currency, power, and balance sheet…..

….The USA should always be paying the the lowest rate. No Inflation! It is only the naïveté of Jay Powell and the Federal Reserve that doesn’t allow us to do what other countries are already doing. A once in a lifetime opportunity that we are missing because of “Boneheads.”

We will come back to the identity of the “Boneheads” later. I want to focus on the idea that interest rates should be “down to ZERO, or less.” We all have our fantasies (remember West Wing, where the president was a Nobel-winning economist?), but this might fall in the “be careful what you wish for” category.

Why? Let’s walk through it using those supply-demand diagrams you are always drawing with your Sharpie. The starting point is shown below, where the supply of Treasury bonds falls as the interest rate rises, and the demand for Treasury bonds rises as the interest rate rises. (As you are well aware, interest rates rise when the price of bonds fall and vice versa, so these curves have the normal upward-sloping supply and downward-sloping demand when compared to bond prices.)

In this example, the market moves interest rates to 5 percent; at any other rate the supply and demand are in mismatch. This is the conventional, more than zero, equilibrium interest rate. 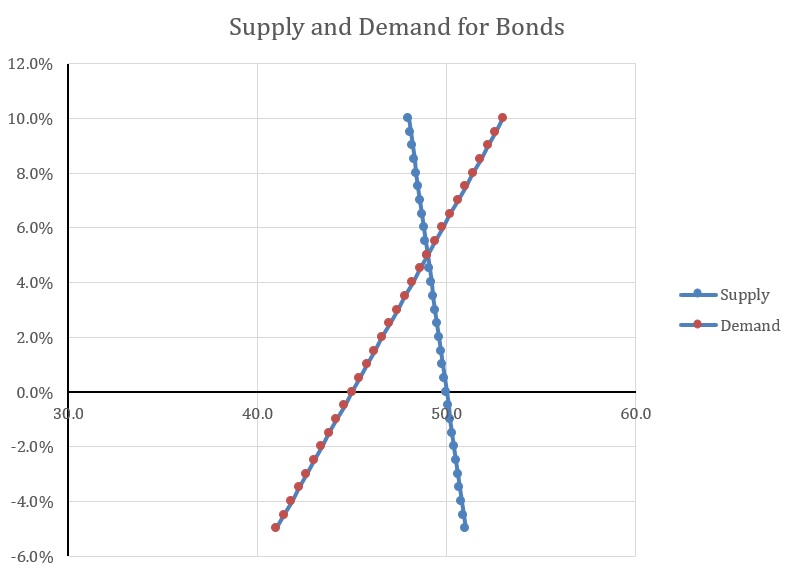 How can interest rates go negative? As a matter of mechanics, one possibility is a sharp reduction in the supply of bonds – at every interest rate fewer bonds are on the market, and you don’t need an interest rate as high to attract comparable buyers. This is shown below, where – in the extreme – the interest rate can drop to -2.5 percent in order to match up supply and demand. 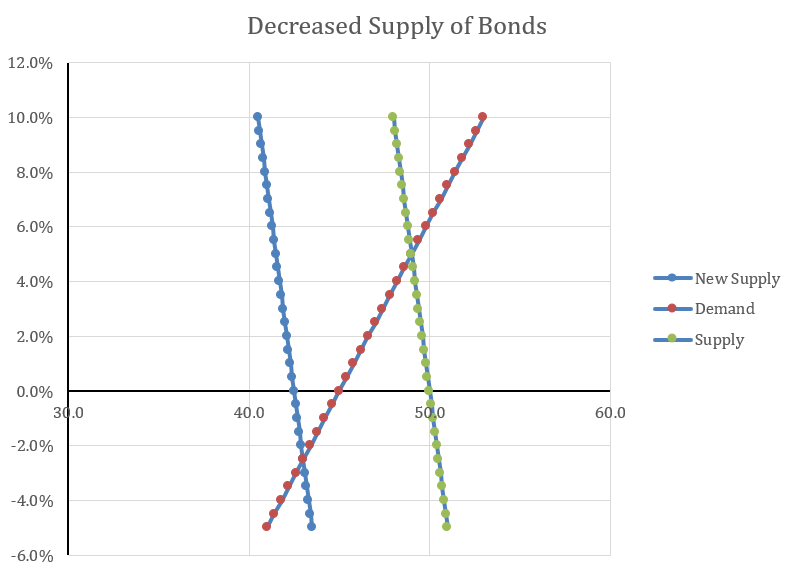 I wouldn’t hold your breath on this scenario. Your budget plans are producing deficits of a trillion dollars or more for as far as the eye can see. This isn’t exactly a “gee, Treasury securities will become scarce” plan for America.

Let’s move on to the other possibility (shown below) – a shift to increased demand for Treasury bonds that drives the equilibrium interest rate below zero. There are two versions of this scenario that are of interest.

The first is to focus on the Fed. Indeed, when the Fed seeks to lower interest rates it essentially prints a pile of money and uses it to buy Treasuries. As the price of the bonds gets driven up, interest rates fall. If the Fed turbo-charged the virtual printing presses, it could pursue this policy.

The problem, unfortunately, is that one definition of inflation is too much money chasing too few goods, and this is an explosion of money. It would shortly be followed by an explosion of inflation. And what do you not want to be caught holding in a (hyper)inflationary environment? Yep, a fixed-income security. The private sector would exit Treasuries in droves, offsetting the increased demand by the Fed, and driving interest rates north.

Nominal interest rates always contain the appropriate inflation premium, so it is hard to imagine the Fed getting, and keeping, interest rates negative. 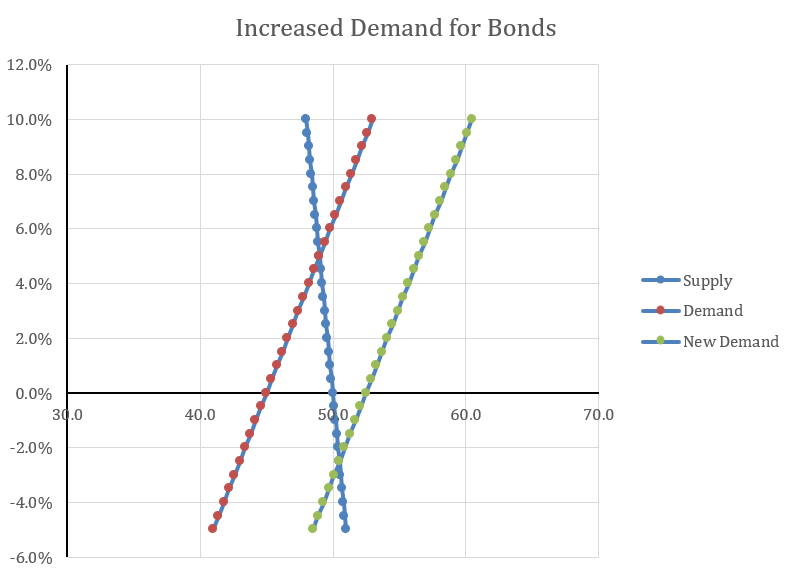 The second variant of an increased demand for Treasury bonds is when private investors radically change their preferences and flood into Treasuries. But if they are flooding into Treasuries, they are fleeing equities, corporate debt, mortgages, and all other risky, non-governmental investment opportunities. That is practically the definition of an economic collapse and financial panic.

In fact, there is a plausible combination of these scenarios in which a radical Fed move to lower rates triggers a self-fulfilling panic about the state of the economy.

So, there you have it. You can get your negative rates, but we’ll have to pair that with a helping of hyperinflation or economic disaster. The reality is that other countries have negative rates because they have broken economies. Let’s not break ours in pursuit of a fantasy.