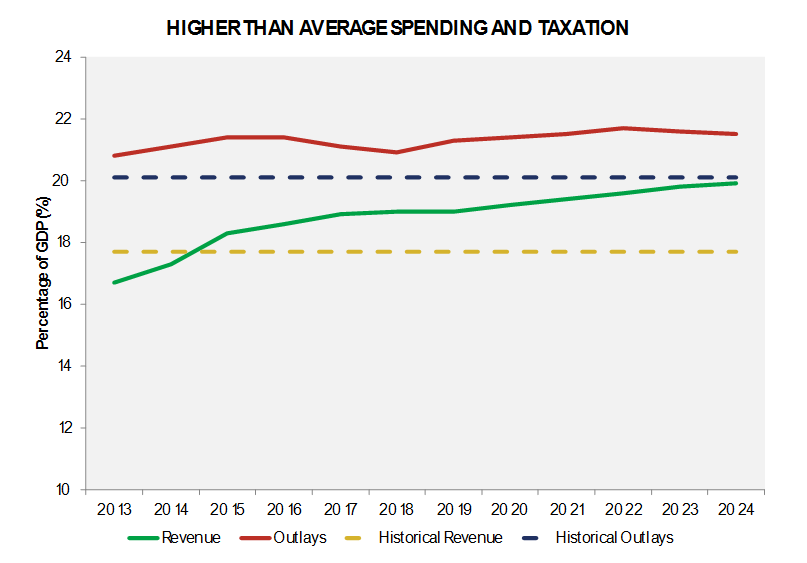 Taxes: The president’s budget proposes increasing tax revenues by $1.8 trillion, raising tax revenues as a share of the economy by over two percentage points above historic norms by the end of the budget window.

Deficits: The president’s budget would carry-forward the record deficits seen recently, requiring additional borrowing of over $1 trillion in the next two years, while running a ten-year average deficit of $493 billion, higher than any observed under any previous administration.

Interest Payments: Interest payments on the debt will reach $812 billion in 2024. This is nearly quadruple in dollar terms compared to 2013 levels and more than double as a share of both the economy and the overall budget.

Debt Held by the Public: Borrowing from the public will reach the highest levels since 1950 in FY 2015, reaching 74.6 percent of the economy and, under the president’s budget, will remain at levels not previously seen in over 60 years.

Compared to CBO’s most recent projections, the president’s budget includes rosier economic projections in terms of both economic growth, unemployment, and interest rates. These effects combine to increase tax revenues and reduce spending associated with the social safety net. In addition the relatively lower interest rates keep interest costs in check relative to the CBO baseline.