“Mega-rules,” regulations that impose more than a billion dollars in economic costs, are growing more frequent, with obvious economic consequences. From 2006 to 2008, the nation averaged two of these rules annually. From 2009 to present, this figure has increased to roughly three per year. During the Obama Administration, these mega-rules have imposed total annual costs of $65.1 billion, with a related 19.5 million paperwork burden hours. The graphs below chart the magnitude and frequency of billion-dollar rules from 2006 to 2014. 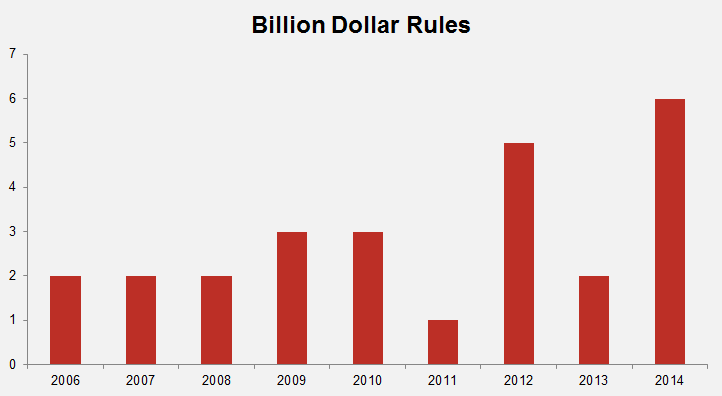 The impact of these rules is real and now Congress has started to take notice. Earlier this year, Congressman Tom Marino introduced a bill, “The Review Act” (H.R. 3438), that aims to give affected entities and the regulated public some initial relief from billion-dollar rules. For example, an agency can issue a billion-dollar regulation in 2011, and companies will immediately take notice, in some instances shutting down power plants and laying off workers. Then, the legal battle goes forward. In 2015, the Supreme Court could act to vacate the rule, but it might be too late. After almost four years on the books, a vast majority of the regulated community might have already complied, making any legal relief a hollow victory.

The Review Act seeks to address the obvious temporal shortcomings of the winding legal system by postponing the effective date of billion-dollar rules, pending judicial review. If, 60 days after publication in the Federal Register, no party has initiated a lawsuit, the rule will take effect. The legislation defines a mega-rule or “high-impact rule” as any regulation that the Office of Information and Regulatory Affairs deems to exceed $1 billion in annual costs.

As mentioned, these rules are somewhat rare, about three annually under President Obama, but their impact cannot be overstated. The five largest rules from this administration have imposed an average of $6.7 billion in annual costs and more than $33.6 billion in total annual burdens. For comparison, that’s the equivalent of approximately four “Clean Power Plans.” Rather than have legally-dubious measures implemented, only to have a court strike it down years later, the Review Act attempts to give Americans some assurances that the expensive new regulation will pass legal muster.

At just a few pages in length, the legislation is not a weighty document, but it could provide some relief for affected entities, allowing the legal process to act before regulators. Although there are close to a dozen regulatory reform bills in the house, the Review Act provides an important focus on the largest federal rules.