Fresh off the heels of finalizing its lodestar “Clean Power Plan,” the Obama Administration is now moving towards other avenues of regulating greenhouse gases. The Environmental Protection Agency (EPA) recently released a series of proposed rules seeking to update methane emissions

The overall burdens, while substantial, are still far less than some of EPA’s recent actions. Interestingly, the oil and gas rule imposes the majority of costs ($420 million vs. roughly $47 million) whereas the landfill rule brings the majority of paperwork (more than 600,000 hours vs. nearly 100,000). The cost differential is likely because the oil and gas rule will impose standards on previously unregulated sources, but the landfill rule merely updates past standards. The paperwork disparity arises from the annual per-respondent burden: 3.9 hours for oil and gas vs. more than 600 hours for landfills.

These rulemakings stand in the shadow of the Clean Power Plan – and its particular focus on coal power – but with a new focus on oil and natural gas. A recent article examined the implications of a “War on Oil” becoming the successor to the “War on Coal.” Although they may not match the costs and benefits of some more coal-oriented regulations, there has already been plenty of action in recent years. According to AAF data, there have been a dozen final rules across four agencies primarily focusing on oil or natural gas:

The overall totals so far are relatively modest compared to certain coal regulations, but they’re far from inconsequential. Including simply the burdens from the oil and gas methane rule would bring the overall cost total past $3 billion and paperwork beyond 200,000 hours.

Such an extensive array of regulation begs the question: why is all of this necessary? Looking to EPA’s own data, methane emissions have declined steadily: 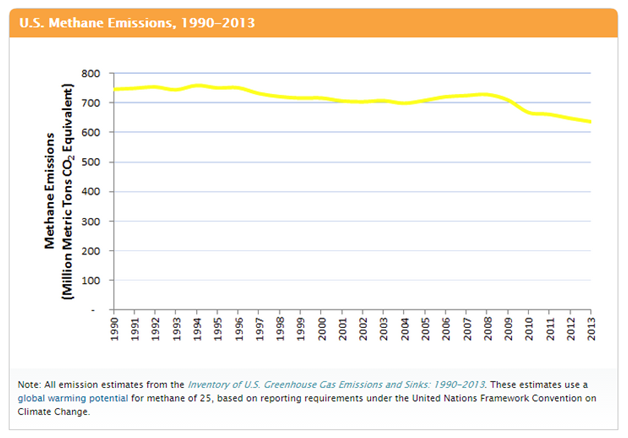 In fact, according EPA’s most recent report on greenhouse gas emissions, methane emissions declined by 71.5 million metric tons of CO2e between 2005 and 2013. What is even more interesting is that over this same time, two subcategories, “Natural Gas Systems” and “Landfills,” saw reductions of 18.9 and 50.9 million metric tons of CO2e, respectively. This is largely due to a combination of the industry’s inherent self-interest in containing methane for use as a fuel source (something EPA notes in its engineering cost analysis) and states already implementing certain rules. EPA estimates that, because of the two main rulemakings, the nation will see a reduction of roughly 9.4 million metric tons of CO2e and some level of unquantified “health benefits.”

EPA seeks to impose nearly half a billion dollars in annualized regulatory burdens on industries in order to achieve reductions that amount to mere fractions of those during the past decade. It claims that – due to the dynamic growth of the hydraulic fracturing field – without this set of rules, methane emissions will rise. It presupposes an increase in the face of strong evidence that, under past regulatory requirements and basic market forces, emissions have declined. Like some of its recent proposals, it seems to be a solution in search of a problem.