Cumulative Impact of Regulation and Employment

Previous studies mostly focused on either a narrow area of regulation – typically environmental or workplace safety – or a limited number of industries – usually manufacturing or the fossil fuel industry. AAF sought to examine the cumulative impact of multiple regulations on different industries promulgated by several agencies.

The authors studied recent “economically significant” and “major” regulations implemented between 2006 and 2010 that imposed unfunded mandates on the private sector and where the agency was required to examine the impact on small businesses. This research does not assume all regulations are created equal, especially with respect to their possible impact on employment. By examining “economically significant” major rules that also place significant burdens on small businesses, we presume these rules to have the largest industry-specific impact.

From this universe of significant regulations that also affected small businesses, we examined each affected industry, as listed in the regulatory text. This yielded 32 industries, affected by eight different regulations. Many industries were impacted by multiple regulations, some by up to three rules within a four-year span.

The following table identifies the eight regulations studied that affected some of the 32 industries. All regulations are major, economically significant, impose unfunded private-sector mandates, and affect small businesses.

Although each regulation conceded that it would have an impact on small businesses, not every rule would have a “significant economic impact on a substantial number of small entities (SISNOSE),” the standard under the Regulatory Flexibility Act. There is no quantified standard for SISNOSE, but it generally represents a regulatory tax on revenue or an increase in prices of one to three percent on hundreds of small businesses. However, many of these rules would impose significant per-establishment costs.

For example, the Health Insurance Portability and Accountability Act (HIPAA) revisions would impose more than $1 million in costs per hospital. Controlling emissions from spark ignition (SI) engines costs small manufacturers 3 percent of revenue, in other words, regulatory taxes. By comparison, the effects of the SI regulation are actually greater than the destructive 2.3 percent medical device tax, which is part of the Affordable Care Act.

The following is a list of the affected industries and the number of regulations imposed during the studied period. Combined, the industries account for 17.5 percent of total private-sector employment.

To statistically examine the cumulative effect of several regulations, this analysis estimates the decrease in industry employment resulting from multiple significant regulations. AAF employed industry-level data from the Bureau of Labor Statistics’ Current Employment Statistics and used average annual employment of the 32 industries listed above for each year from 2002 to 2012. Using these data, AAF performed a fixed effects regression to estimate the effect of an industry receiving one, two, or three new regulations within that period on the log of employment. To account for macroeconomic forces during the period, such as the loss in employment due to the Great Recession, AAF controlled for year. In addition, to account for changes in prices over that time, AAF controlled for industry chained CPI. 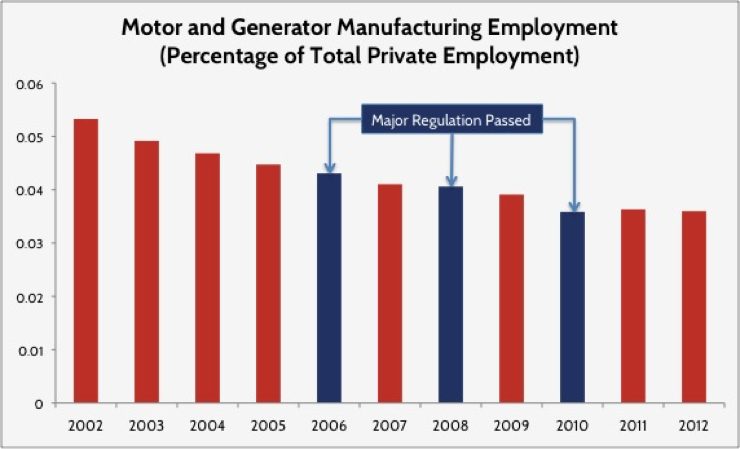 There have been countless hearings in Congress on the impact of regulation on employment. Most of the focus has been on EPA and this scrutiny is not unfounded. During the last five years, the administration has published 25 “major” regulations (impact of $100 million or more). Two regulations, Mercury Air Toxics Standards (MATS) and the Cross-State Air Pollution Rule (CSAPR), have had arguably the largest anecdotal impact on employment. Although CSAPR is pending before the Supreme Court, the combined impact of the two regulations has contributed to approximately 15,000 job losses, according to industry announcements.

The following map displays power plant closings across the U.S. that cited recent EPA regulations as a reason for retirement.

Many individual plants faced up to $550 million in regulatory compliance costs and historically low natural gas prices. As the results demonstrate, the fuel switching to natural gas, combined with higher regulatory costs, has slowly closed coal and oil-fired plants across the nation. Not surprisingly, employment in fossil-fuel power plants has declined in recent years, from, 137,072 in 2009 to just 98,630 in 2012, a 28 percent decline. This drop in employment was even more pronounced in Kentucky, which lost 33 percent of its fossil fuel generation during that period, and West Virginia, which lost 28 percent.

The Affordable Care Act (ACA) has also been a culprit in reduced hours due to new regulations. According to previous AAF research, the ACA has already imposed $32.1 billion in regulatory burdens and more than 126 million paperwork burden hours. These burden hours will obviously have an impact on labor and productivity. For perspective, it would take more than 63,400 employees working 2,000 hours a year to complete the annual ACA paperwork.

A recent project by Investor’s Business Daily tracks employers reducing employment because of the ACA. To date, they found 331 employers cutting hours or jobs. For the quantified figures that do exist, Investor’s Business Daily found that close to 19,000 jobs would have their hours cut, which translates into at least 100 lost full-time equivalent (FTE) jobs. However, this is only based on partial data; a full account of this sample translates into 357 lost FTEs.

The ACA and recent EPA regulations have clearly had an impact on employment, but researchers will not know the extent until the administration fully implements the ACA, and until EPA finishes its greenhouse gas regulations.

Although past studies examining the impact of regulation on employment have produced mixed results, few analyzed the cumulative effect of multiple costly regulations by different agencies on 32 separate industries. The fight over a single regulation often invites questions about employment effects, but it is rare that one rule causes massive disruptions in industry employment. A 20 percent drop in regulated industry employment is significant, however, and policymakers should always take into account existing regulatory burdens when promulgating new rules. This research demonstrates that the cumulative effect of regulation is significant.