Ending the Lockout of Overseas Earnings: An Update

Congress has begun the examination of a broad overhaul of the corporation income tax, a key component of which is the tax treatment of foreign-source income.  In particular, there is interest in moving toward a hybrid system that more closely taxes foreign income only where it is earned, without a second layer of tax when repatriated to the United States.

In 2011, the American Action Forum produced an analysis assessing the benefits of corporate tax reform.  Among the reforms examined in the paper was a temporary tax holiday on foreign earning by U.S. multinationals to encourage the repatriation of those funds.  In order to inform the current debate, this update reexamines that analysis. At the time, the temporary policy was estimated to produce an increase of $360 billion in GDP and add 2.9 million jobs. Over the past year and a half, some key elements underpinning that analysis have changed. Those changes would combine to, on net, increase the effect on the economy from a repatriation policy. Based on these revisions, a future repatriation policy could be expected to add $440 billion to GDP and 3.5 million jobs.  Of course, with a permanent reform, the pace of the return of funds would likely be lower and stretch out the timing of these impacts.

The underlying methodology of this update remains consistent with the initial estimate. To investigate the likely impact of a future repatriation policy, the American Action Forum conducted an informal poll of U.S. corporations that have potentially large amounts of overseas earnings available for repatriation. The sample of firms contacted had an estimated $600 billion in overseas earnings at the time of the survey. Each firm was asked how much it would repatriate in response to the policy change and what priorities it had for repatriated funds.

Examining the abstract and informal responses from the 10 firms who responded indicated that these firms had an estimated $85 billion overseas – roughly 15 percent of the total at the time – and collectively anticipated repatriating about $62 billion. If this constitutes the same fraction of repatriations, it translated to roughly $470 billion for the sample as a whole. At the time, U.S. multinationals as a whole were estimated to have between $1 trillion to $1.5 trillion overseas. Based on the survey, these overseas balances implied a crude range of repatriation between $800 billion and $1.2 trillion.

Since that survey, estimates of overseas earnings have only increased. A recent study by Audit Analytics, offshore earnings by U.S. multinationals totaled $1.9 trillion.  A separate analysis by Bloomberg also suggested that overseas earnings of U.S. multinationals stood at $1.9 trillion.  An earlier study by JP Morgan Chase & Co estimated that this figure amounted to $1.7 trillion.  The trend is clear, however, that since the original estimate of the economic impact of a future repatriation policy, the amount of accumulated overseas earnings is larger. Holding the findings of the initial survey constant, these overseas balances implied a crude range of repatriation between $1.1 trillion and $1.6 trillion.

The initial survey also included information on the disposition of the repatriated funds. Nine of the ten firms listed new capital investment as either their first or second use of the funds. Among the other uses of funds such as increasing payroll, paying dividends, re-purchasing shares or retiring debt there was no particular dominant theme. It’s important to remark that regardless of how the funds are used, they would be spent in the U.S. rather than abroad.

To gauge the impact of a future repatriation policy, the original estimate built upon the analysis of stimulus by the Congressional Budget Office. As noted earlier, the inflows of repatriated funds are the private sector analogue to the American Recovery and Reinvestment Act (ARRA) cash flows that would be used for hiring, purchases of investment goods, and research and development, as well as for financial transactions that put funds in the hands of corporations and American households.

The CBO releases regular reports on the output and employment effects of the ARRA. The initial estimate used a May 2011 report to compute the impact of the $830 billion stimulus in 2009 on GDP and employment in the 4th quarter of 2010.  This provided a “multiplier” for the longer-run impacts per dollar of stimulus. These multipliers were used to construct impacts from the proposed repatriation policy. CBO’s estimates constitute a range, so the implied repatriation impacts constitute a range as well.

Since the initial study, CBO has continued to release reports on the output and employment effects of the ARRA. These reports have included some revisions to the stimulus’s macroeconomic effects. Since the initial AAF estimate of a repatriation policy, the CBO has downwardly revised the low range estimates of ARRA’s impact on output on employment on GDP and employment in the 4th quarter of 2010.  This update reflects those changes.

Table 1: Results Based on CBO Analysis of ARRA 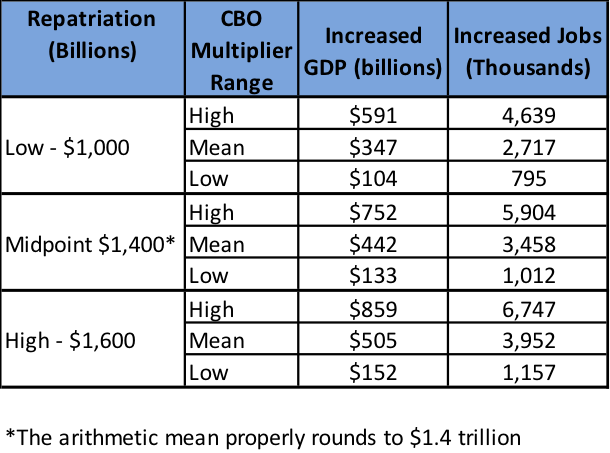 The results are shown in Table 1. As shown in the “Midpoint” scenario in row 3, the CBO analysis implies that under this policy, GDP would be higher by $442 billion (reflecting a range of $752 billion and $133 billion associated with the low and high bound multipliers, respectively). Similarly, the CBO analysis implies an additional 3.5 million more Americans at work (reflecting a range of 5.9 million and 1 million associated with the high and low bound multipliers, respectively) over the course of 8 quarters of implementation.

Additional methodological considerations are addressed in the original study.

While a temporary repatriation policy holds the potential for significant economic growth, the U.S. tax code should ultimately be reformed permanently to encourage long-term economic growth. Reforms should encourage firms to headquarter and invest in the United States, minimize expensive and unproductive tax-planning strategies, improve economic competitiveness, and enhance high-quality jobs. A first step would be to encourage companies to repatriate foreign earnings, with the ultimate goal of moving toward a territorial system of taxation. Lowering the corporate tax rate while scaling back the myriad targeted deductions, credits, and carve-outs currently found in the corporate tax code would increase U.S. competitiveness, stimulate the economy, and introduce a greater degree of simplicity.