One Year Later: An Updated Look at the Housing Recovery in Arizona

One year ago, experts at the American Action Forum wrote a paper analyzing housing market data behind the boom and bust in Arizona. Phoenix was also the third stop in a national tour of educational events around the country meant to highlight how local markets were recovering from the housing crisis. The rise and subsequent fall of prices in Arizona is emblematic of the now familiar and well-documented house price bubble and collapse that began more than 6 years ago and resulted in a nearly unprecedented loss of household wealth. Arizona is unique among other hard hit states in the level of stabilization and improvement it has seen since hitting bottom. These improvements are largely attributed to two things: rising employment and the swift clearing of distressed properties, i.e. foreclosures, from the market. Prices, employment, and other housing related indicators have all improved since our study last year. This paper will highlight what exactly has changed and where the recovery is headed.

The Trajectory of House Prices

As shown in Figure 1, house prices in Phoenix fell further than other large metropolitan areas tracked by the S&P Case-Shiller Indices, with the exception of Las Vegas. Prices have now been rising in Phoenix since September 2011, making it one of the most improved metropolitan areas. Considering how far prices had fallen, about 56 percent in the Phoenix metro area, the 34 percent increase since hitting bottom is very strong even coming off of very low levels. The average home in the Phoenix metro is worth about 59 percent of its value at the peak of the market, up from 44 percent at the lowest point after the bust.

When we analyzed home values around Arizona last year, three of Arizona’s largest cities had negative price growth on a year-over-year basis, Tucson, Yuma, and Flagstaff. Nearly all of the Phoenix metro area had already begun to show strong price growth. That situation has improved, with all of the cities being tracked in Table 2 showing prices increasing from June 2012 to June 2013. Cities outside of the Phoenix metro continue to have slower price improvement, though notably many of those same cities did not have prices fall as far during the housing crisis. For example, though prices in Flagstaff declined in June 2013 from the previous month, overall homes are now worth 67 percent of their value at the peak of market, slightly outperforming Phoenix proper where homes are worth 63 percent of their peak value on average.

The strongest price increases continue to be in suburban areas outside of Phoenix like Mesa, Glendale, and Scottsdale. These areas typically have unemployment rates more in line with the national average of 7.4 percent or lower. In fact, the Phoenix metro area had an unemployment rate of 7.2 percent (not seasonally adjusted) in June 2013, and house prices increased 22 percent from a year earlier.

Of the 15 counties in Arizona, eight had unemployment rates fall on a year over year basis while one, Mohave County, remained unchanged; the rest had rates increase. Importantly though, due to the concentration of Arizona’s population predominately in and around Phoenix and Tucson, those eight counties with falling unemployment represent 90 percent of the state’s population. While employment growth could be much stronger, most cities are experiencing greater economic growth and resurgent home values.

Ultimately, weak or inconsistent employment growth has proved to be a headwind to recovery, not solely in Arizona but across the United States. About 20,100 jobs have been added in Arizona this year, bringing the total number of jobs added since the end of the recession in June 2009 to 84,800 jobs (See Figure 2). While Arizona’s labor market has been improving over the past few years, job growth has not yet surpassed the 261,600 jobs lost in the recession. In fact, in June 2013 there were still 171,600 fewer workers in the labor force in Arizona than when the recession began.

While job growth has been mostly positive, policies, especially on the federal level, have impeded the recovery. Pro-growth policies like immigration reform and tax simplification have not been pursued, holding employment growth back throughout the country. It takes both job and wage growth to spur home purchases and construction. In areas like metro Phoenix, low to moderate income buyers are now having difficulty outbidding institutional investors as prices continue to increase with tightened inventory.  Ultimately it is growing wages and resultant increased homebuilding that will put the recovery on a more sustainable level and open up more possibilities, especially for first time homebuyers. 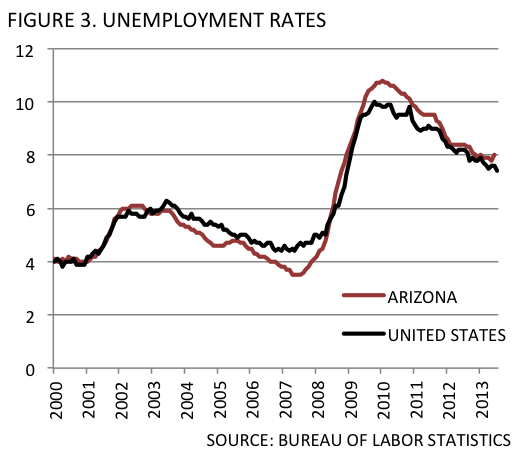 Though Arizona’s recovery faces new challenges, there is still plenty of good news. Maricopa county, home to most of the Phoenix metropolitan area and just over 60 percent of Arizona’s population, has seen its unemployment rate fall, on a year over year basis, for 30 months straight. In spite of the unemployment rate in Arizona rising up to 1.1 percentage points higher than the national average during the housing crisis, this year that gap has closed to 0.4 of percentage point at the most (See Figure 3).

At the peak of the market, the construction industry employed 244,300 people in Arizona, not to mention those employed in related industries. 76 percent of those jobs were in the Phoenix metro area. While construction employment has grown in metro Phoenix this year, the overall level of employment is just over half of what it was at the peak of the market. When demand finally picks up, so too should new homebuilding and construction jobs, granted no labor shortages exist. 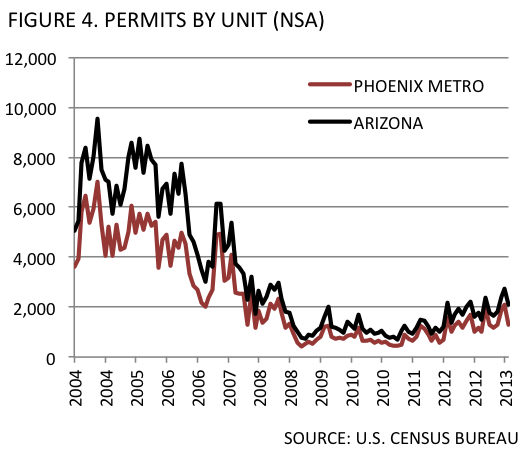 Residential construction building permits, shown in Figure 4, have been increasing but are still generally at very depressed levels. As the glut of foreclosures continues to clear, supply will constrict even further and spur greater home construction. This is already beginning to happen. In fact, permits in Arizona were 24 percent higher in June this year over last year. June continues the trend of year over year increases that started two years ago, except for a single month, February 2013. Ultimately limited supply should help drive both greater building and continued increases in home prices.

Foreclosures and Other Market Indicators

Improved labor markets conditions are only part of the reason Arizona has seen prices increasing for more than a year. The ability to clear foreclosure inventory from the market is equally important. Arizona’s non-judicial foreclosure process has allowed distressed properties to be taken off the market more quickly than similarly hard hit states, driving prices upward. High investor demand especially around Phoenix has also contributed to the ability to reduce the inventory of these properties quickly. For example, shown in Table 2, Arizona’s supply of distressed homes has fallen from 4.8 months a year ago to 2.9 months this year.

The time it takes to complete a foreclosure in Arizona, despite rising 55 days since last year, is still significantly shorter than other hard hit states like Florida, which has a judicial foreclosure process taking 907 days. The U.S. average has risen from 378 days last year to 526 days this year. Nevada, Florida, and California all have longer foreclosure timelines than Arizona and have not seen the same price increases that Arizona has seen.

Following the onslaught of the housing crisis, a host of programs, on both the federal and state levels, were implemented to stop prices from plummeting and help borrowers threatened by foreclosure. On the federal level, the President and Congress devised a slew of housing programs and initiatives, which have been repeatedly changed following criticisms of their ineffectiveness. Through the second quarter of 2013, about 166,459 borrowers in Arizona have received assistance through HAMP (Home Affordable Mortgage Program), HARP (Home Affordable Refinance Program), and Save Our Home AZ, a host of state-level programs developed using money allotted by the federal Hardest Hit Fund. The most successful of these programs has been HARP, which has cumulatively helped 130,894 borrowers in Arizona through Q2 2013, though most of those borrowers were helped only recently following program changes. When our report was released last year, there had only been 59,325 HARP refinances.

Generally, state and federal programs have fallen far short of the helping the number of borrowers originally estimated and have actually at times been counterproductive. Borrowers who received loan modifications and then re-defaulted lengthen the time it takes for the housing market to recover as a whole by keeping distressed properties from clearing the market by keeping house prices suppressed longer. Recent reports have shown that 36 months after modification, Fannie Mae, Freddie Mac, and other government-guaranteed loans had re-default rates of 35.2 percent, 36.3 percent, and 59.2 percent respectively. While it has always been a worth goal to assist borrowers in keeping their homes, loan modifications are only effective when they bring mortgage payments to a sustainable level in the long term. Job growth and the clearing of distressed properties quickly are more directly responsible to the improvement conditions seen in Arizona over the past year.

In contrast to many other hard hit states, conditions in Arizona are improving, and quickly. The expeditious clearing of excess inventory has paved the way for increasing prices, helping underwater borrowers rebuild equity in their homes. Housing has recovered in Arizona, especially metro Phoenix, better than most other similarly situated parts of the country. Those improvements come not through federal aid, but through a diversified economy with growing employment and the speedy clearing of distressed properties. A year later, housing is on a more solid footing. It will take greater job and economic growth, though, for a sustained recovery that allows new buyers entry into the market.