One Year Later: An Updated Look at the Housing Recovery in Ohio

One year ago, experts at the American Action Forum wrote a paper on how Ohio fared in the housing crisis.  It was also the second stop in a national tour of housing events to discuss the features of several local markets in the context of a nation in recovery.  We found that prices in Ohio did not follow the same speculative boom and bust typical of states like Nevada and Florida. Instead, its falling home prices and high rate of foreclosure were more singularly the result of a depressed economy. While areas around the state have seen house prices stabilize and begin to increase, price growth this year has been uneven. Ohio’s lengthy judicial foreclosure process has impeded price recovery by lengthening the time it takes distressed properties to clear the market. The recovery has been held back further by unemployment, which has actually risen in recent months. While it is too soon to describe the economic situation as deteriorating, both the economic and housing recoveries continue to face headwinds. This paper will serve as an update on housing and the economy in Ohio since last year and detail what remains to be done to spur growth.

House prices in Ohio did not rise as high or fall as hard as states like Nevada and Florida, which now typify the boom and bust of the housing crisis. For example, in Nevada prices fell by 62 percent from the peak of the market in 2006 to the trough in 2012. Since then, prices there have risen 30 percent. However, this may be deceiving because while prices have improved, they have done so off of very low levels. Home values in Nevada are now only about half of what they were at the market peak. In comparison, home values in Ohio fell 18.5 percent and have since recovered to 85 percent of peak value, increasing about 5 percent since the market trough in January 2012. While prices are rising more slowly than states similarly hit by the foreclosure crisis, Ohio’s markets were also not characterized by the same extreme boom and bust.

When looking at how prices have improved in Ohio, it is also important to remember that there is no single housing market in Ohio, but many. Metro areas, cities, towns, and neighborhoods can, and have, all charted different courses on the road to recovery. One general trend, however, is fairly pervasive; cities with stronger job markets and higher levels of employment, have typically seen stronger price stabilization. This was true in 2012 and remains true today. Columbus is a prime example. With its unemployment rate almost a percentage point lower than the state average, Columbus has seen homes recover to about 90 percent of their value at the peak of the market in early 2007. Prices in Columbus did not fall as much as comparably sized cities in Ohio and have actually risen higher, more quickly since hitting the bottom. In comparison, Toledo, with an unemployment rate more than a percentage point above the statewide average, has seen house prices fall this year.
Ohio has lower unemployment than the U.S. on average  and rising prices may be less directly caused by resurgent demand driven by jobs and higher wages than other factors. According to the latest beige book report by the Federal Reserve Bank of Cleveland, “List prices of new homes increased by as much as 5 percent in certain markets this year primarily due to rising costs for land, building materials, and to a lesser extent, labor.”  An increase in home prices will help underwater borrowers build equity, however, a lack of employment opportunities or wage growth will ultimately stifle demand in the long run. While restricted supply has helped boost prices, in the long term concerns over the cost of building materials or shortages of skilled labor may ultimately put a damper on the pickup of home construction unless the economic outlook brightens. On the demand side, rising interest rates may encourage a pick up in purchasing in the short term, but affect home sales in the long term depending on job and economic growth.

About 26,500 jobs have been added in Ohio this year, bringing the total number of jobs added since the end of the recession in June 2009 to 158,300 jobs (See Figure 1). While Ohio’s economy has been slowly improving over the past few years, job growth has not yet surpassed the 378,300 jobs lost in the recession.  In fact, in June 2013 there were still 216,700 fewer workers in the labor force than when the recession began in December 2007. The latest report from the Bureau of Labor Statistics showed an increase in the unemployment rate from 7.0 percent in May to 7.2 percent in June with a loss of 12,500 jobs. While subject to revision, these losses are indicative of uneven, sluggish job and economic growth reflected not just in Ohio but also across the country. Ohio’s employment situation has not fundamentally improved since our last report; the unemployment rate is unchanged from one year ago. 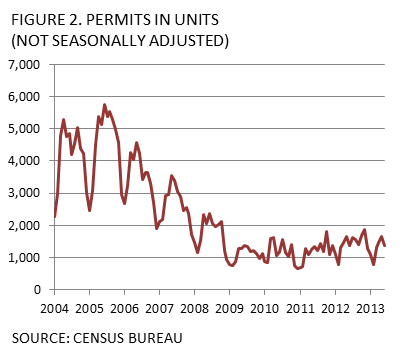 Following the onslaught of the housing crisis, a host of programs, on both federal and state levels, have been implemented to stop prices from plummeting and to assist borrowers threatened by foreclosure. On the federal level, the President and Congress devised a slew of housing programs and initiatives, with a portion of the funding coming from the Troubled Asset Relief Program (TARP) and the remainder coming from the Government Sponsored Enterprises (GSEs, or Fannie Mae and Freddie Mac). Numerous changes to the programs have been made over the past few years following repeated criticisms of the programs’ weaknesses.

Through May 2013, 114,387 borrowers in Ohio have received assistance through HAMP (Home Affordable Mortgage Program), HARP  [PDF] (Home Affordable Refinance Program), and the Save the Dream Ohio Initiative, programs meant to help borrowers bring mortgage payments to an affordable level and stay in their homes (See Figure 3).    This represents an increase of 63 percent from last year, driven mostly by increased HARP refinances (See Figure 4). 38,074 HARP refinances were made from the first quarter of 2012 to the first quarter of 2013 in Ohio and have been increasingly helping borrowers with negative equity in their homes (i.e. have high loan to value ratios or high LTVs) following changes made to the program. Also, the number of borrowers aided by the Save the Dream Ohio Initiative notably doubled, though far fewer borrowers were aided overall when compared to HARP.

This time last year only $96 million, or 16.8 percent, of the $570 million allocated to Ohio as part of U.S. Treasury Department’s Hardest Hit Fund program had been disbursed. The most recent report showed 21 percent of the allocated funds had been disbursed, or $120 million, helping 10,115 borrowers through the first quarter of 2013.  Ohio’s Restoring Stability program, which arose from those funds, includes rescue payment, mortgage payment, modification with contribution, lien elimination, and transitional assistance programs. The money can continue to be used through 2017.

Generally, state and federal level programs have fallen far short of the estimated number of borrowers they were expected to help and have actually at times been counterproductive. Borrowers who receive loan modifications and then re-default lengthen the time it has takes for the housing recovery as a whole to take hold, further extended in states with lengthy foreclosure processes. 36 months after modification, Fannie Mae, Freddie Mac, and other government-guaranteed loans had re-default rates of 35.2 percent, 36.3 percent, and 59.2 percent respectively.  While it has always been a worthy goal to assist borrowers in keeping their homes, loan modifications are only successful when they bring mortgage payments to an affordable and sustainable level in the long term. For borrowers who truly cannot afford the homes they are in, modifications simply delay the inevitable.

In Ohio, the number of foreclosures has finally begun to shrink. Figure 5 shows the number of new foreclosure filings tracked by the Ohio Supreme Court. Filings were down 2 percent from 2011 to 2012 and down 21 percent since their peak in 2009.

Though policymakers have not acted to change Ohio’s judicial foreclosure laws, numerous steps have been taken to support the redevelopment or demolition of abandoned homes. Oversupply of inadequate housing drags down local communities and attracts crime. Redevelopment, including targeted demolition, is essential in communities with a high number of vacant homes, declining home values and slow population growth. Policymakers in state and local government have shown a willingness to pursue these policies, necessitated by the reality that only about one-third of the counties in Ohio were projected to have populations in 2040 larger than they are today.

While the foreclosure crisis is finally beginning to wind down in Ohio, the economy is still growing only modestly at best. Without the continued clearing of foreclosures and policies that encourage stronger growth in both jobs and incomes, the recovery of housing markets in Ohio will also continue only modestly at best. While most housing indicators have improved since we visited Ohio last year, foreclosure timelines are longer, and higher than the nation on average. The employment situation is virtually unchanged; progress has been made but not enough.

Child Poverty and The Effects of Anti-Poverty Programs

Update: On June 14, 2021, the United States and European Union (EU) agreed to suspend tariffs from the Boeing-Airbus trade dispute for an additional five…

Poverty in the United States

Under both the OPM and SPM, employment and educational attainment are the two best indicators for whether someone is likely to be impoverished, followed…