The Affordable Care Act (ACA) has already imposed tremendous burdens on states and the private sector. The law will generate $32.3 billion in costs and more than 127 million paperwork burden hours, and those are just the burdens the administration reports publicly. There have obviously been notable problems with healthcare.gov, the federal website for health care exchanges. These problems with implementation likely stem from early regulatory failures at the agency level. For example, the administration initially estimated it would take just 28 minutes to complete the online application. We now know that figure is nowhere close to reality.

New AAF research examined these regulatory failures more closely and found numerous technical and substantive errors with the implementation of the ACA. The administration has issued 104 final rules and then issued 254 subsequent corrections to these regulations. The table below highlights the current regulatory burdens of the law and the errors during implementation.

As members of the public are well aware, ACA implementation is error-prone. The administration has published 104 prescriptive regulations and has issued 33 corrective documents (an error rate of 32 percent). In three instances, the administration was forced to publish corrections to earlier correcting documents. Those documents contained 254 separate corrections to previous regulations. By comparison, Dodd-Frank has an error rate of less than ten percent, despite its troubled implementation.

The number of pages issued under the ACA has generated considerable press, but it is perhaps more striking how many mistakes have been made during the process and how many pages the corrections consume. To date, the administration has published 136 pages of correcting documents to ACA regulations.

Not surprisingly, regulators issued 16 corrections to the health plan exchange final rule. One section noted, “However, one sentence implies that any licensure standards for Navigators would cause Navigators to be agents and brokers, which is inaccurate.” That final rule imposes $3.4 billion in costs and more than 1.1 million paperwork burden hours, but no corrections were made to the compliance cost section.

In one instance, the administration was forced to make 37 separate corrections to an ACA rule. Even more disturbing, the White House spent just five days reviewing the proposal, rushing it out, only to issue a full slate of corrections two months later.

One correction to the controversial menu labeling regulation listed 21 different amendments to the original proposal, including multiple section changes and alterations to initial capital costs.  That proposal would cost restaurants more than $750 million, with 14.5 million paperwork burden hours. Regulators also expanded the proposal to include grocery stores, even though it appears that Congress never intended to sweep all food vendors under a new regulatory apparatus.

Finally, the administration made 24 corrections to its “Medical Loss Ratio” (MLR) requirements rule, which determines how much money insurance companies devote to patient coverage.  Embarrassingly, the administration also had to correct that earlier correction. Other changes fixed text that was “technically inaccurate and [conflicted] with language elsewhere.” The final MLR rule imposed $228 million in costs and 1.2 million paperwork burden hours. 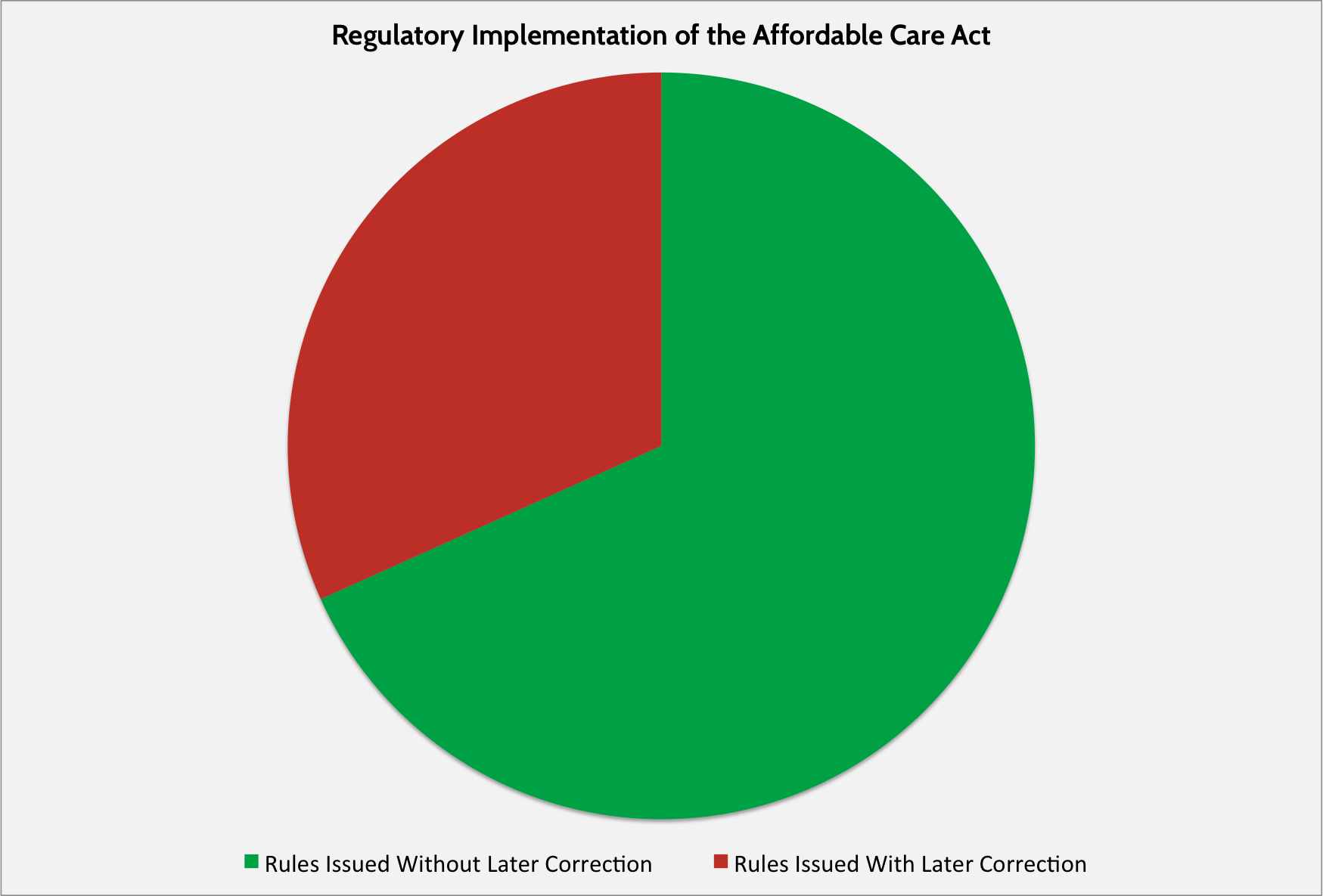 The enormous regulatory costs of the ACA, higher health care premiums, and the broken website are not surprising in light of the numerous errors the administration made with its own regulations. If the White House fails to issue correct exchange regulations and estimates it will only take a few minutes to complete the process, a failing website is merely the public display of these past regulatory failures. There’s a great deal of debate about the public policy benefits of the ACA, but missing deadlines and 254 errors during implementation isn’t good policy, or good government.