As the widespread discussion of the minimum wage continues to dominate headlines, a number of states have taken initiative to raise their own minimum wages. At the beginning of 2014, 13 states enacted minimum wage hikes, detailed below.

Nine of the hikes were a result of automatic adjustments for inflation and four were caused by new laws the states had approved in 2013. Now that we are halfway through 2014, these states provide a new source of evidence to evaluate the labor market implications of raising the minimum wage. So what happened? It turns out that raising the minimum wage has been detrimental to job creation in industries that actually hire minimum wage workers: retailers and restaurants. Specifically, in states that raised their minimum wages in January the net job growth rate among retail and restaurant workers fell an average 1.7 percentage points, costing those states 129,200 new jobs total.

Why not evaluate trends in total employment?

Thus, in order to fairly examine the labor market consequences of increasing the minimum wage, it is essential to examine low wage workers who actually earn at or slightly above the current minimum wage. This includes young, low-skilled workers, the exact population policymakers are trying to help by increasing the minimum wage. One way to zero in on the low wage population is to examine recent job growth trends in industries that actually employ low and minimum wage workers. Specifically, this paper examines the most recent annual net job growth rate (May 2014) in retail and restaurants. Together, retail and restaurants employed 58 percent of all federal minimum wage workers in 2012 and evaluating job growth within those industries provides a valid estimate of how the minimum wage impacts job creation.

Outside Factors and the Severe Winter Likely Impacted Job Growth

It is also important to take into account factors that may influence employment other than the minimum wage. For instance, it is possible that states that increased their minimum wages already had strong job growth rates and could afford a wage hike. In addition, states vary in education, productivity, and household demographics, all of which affect job creation.

For the first half of 2014, the severe winter weather during the first quarter in particular likely influenced job growth as real GDP contracted at a 2.9 percent annual rate. Moreover, it appears that states where minimum wages did not increase suffered harsher winter conditions than states that did raise their minimum wages. This is evident in the graph below, which measures the difference between average temperature of all 48 continental United States and both the average temperature in states that raised their minimum wages in January and the average in those that did not.[1] 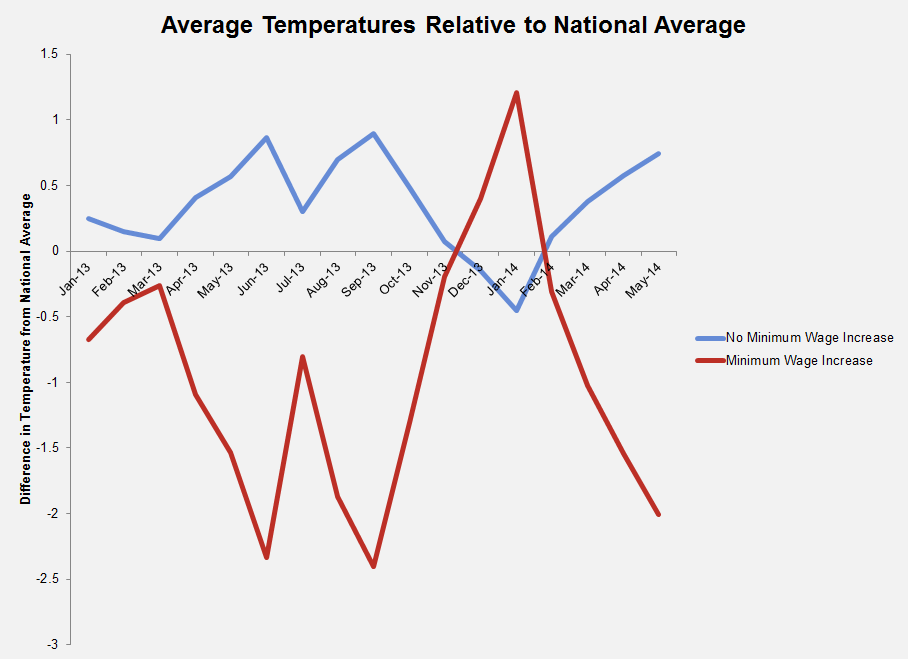 Clearly, it is necessary to control for other factors that influence job creation, like the severe winter weather conditions. So, instead of simply observing net job growth rates in retail and restaurants within each state, this paper uses the most recent state level employment data and takes a differences-in-differences approach to demonstrate how the January minimum wage hikes impacted hiring.

Table 2 contains the average May net job growth rates among retail and restaurant industries and all other industries in states that increased their minimum wages in January and in those that did not.[2], [3]

Before making the differences-in-differences calculation, this table already shows the detrimental impact raising the minimum wage has had on hiring. At 0.6 percent, the average net job growth rate among retailors and restaurants in states that increased their minimum wages was considerably low relative to the net growth rate among all other industries in those states (1.7 percent) and retailors and restaurants and all other industries in states that did not change their minimum wages (2.0 percent and 1.5 percent, respectively).

In turn, a simple differences-in-differences calculation, which helps control for outside factors that affect hiring, reveals that in May the average net job growth rate in retail and restaurant services was 1.7 percentage points lower in states that raised their minimum wages in January than in states that did not. Applying this result to employment levels reveals that all the state minimum wage increases in January together cost 129,200 new jobs.

Table 3 reveals the reduction in hiring associated with each state’s minimum wage increase.

The money needed to afford an increase in the minimum wage has to come from somewhere. While many assume that it would come out of profits of large companies, in reality it only affects restaurants and retail businesses that have narrow profit margins. They have no choice but to either reduce their current employment levels or put off plans to expand and make new hires.  As a result, the cost of the minimum wage comes out of the pockets of unemployed workers who are denied an opportunity to work. With the recent minimum wage increases keeping 129,200 retail and restaurant workers unemployed, it is time policymakers consider policies that actually improve job creation and get people back to work.

[1] I thank Robert Abramov for his assistance in analyzing weather trends. Data on average temperatures are from the National Climatic Data Center, available at http://www.ncdc.noaa.gov/cag/

[2] Average annual net job growth rates are based on the author’s calculations of state level data on Retail Trade and Food Services and Drinking Places, available at the Bureau of Labor Statistics, http://www.bls.gov/data/.

[3] Since the Bureau of Labor Statistics does not have employment information for Food Services and Drinking Places in Iowa, New Mexico, South Dakota, and West Virginia, those four states are excluded from the analysis.