Last year, the American Action Forum highlighted the extensive paperwork barriers veterans must face when applying for benefits and communicating with the Department of Veterans Affairs (VA). A year later, despite VA commitments to streamline the process, the agency’s paperwork burden continues to climb. Last year it was just above 7 million hours. Today, it stands at approximately 8.7 million hours, the highest in recent history. The graph below displays VA’s paperwork burden from 2008 to present. 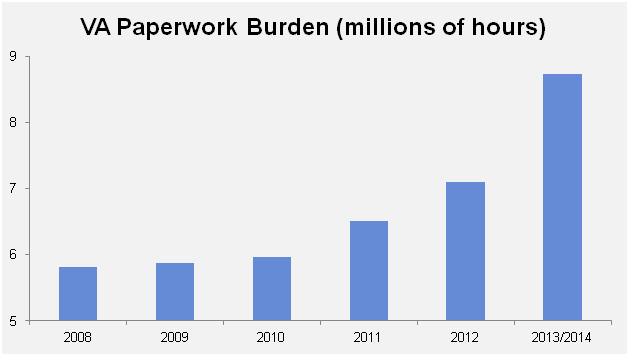 When AAF surveyed VA paperwork in 2013, there were 542 forms. Today, there are 558 and more than a million hours of additional red tape. Instead of cutting paperwork, the VA has added more onto veterans who are waiting weeks for benefits.

For example, in the past year VA has added at least 13 questionnaires that impose more than 300,000 burden hours and close to $10 million in additional costs. Although VA provides a pedestrian figure of $1.2 million for annual paperwork compliance, apply a mean hourly wage of $32.10 for a generic compliance officer, and costs rise to roughly $280 million annually. These burdens fall mostly on veterans and health care providers.

Based on VA’s application checklist for disability compensation, a veteran applying for benefits and then appealing could encounter several primary collections of information and nine forms. This initial process and appeal will take more than five hours to complete the paperwork, and assuming an average wage rate, roughly $150 worth of time.

The Veterans Administration has been under the microscope for more than a year now, in part due to long wait times. Last year, when backlogs were firmly in the press, the VA stated, “This administration has shown an unwavering commitment to serve Veterans.” Earlier this year, VA boasted of its reduced backlog and noted that its new plan “transforms the decades-old, manual paper claim approach into a state-of-the-art electronic process.” According to administration records, there are 245 paperwork requirements with forms, but only 30 “can be submitted electronically” (just 12 percent).

It’s clear that despite statements from VA, and even an executive order designed to streamline the regulatory process, the agency has not been able to trim the steady tide of red tape that veterans must manage on a daily basis. A brief review of the major paperwork collections reveals that costs and hours continue to increase.

For example, part of the problem is the sheer demand for VA services. The agency’s Inquiry Routing and Information System (IRIS) recorded 360,000 responses from veterans last year, accounting for 60,000 annual burden hours. This system routes “electronic inquiries to the appropriate office.” Today, IRIS generates more than 7.7 million responses and approximately 1.3 million burden hours. It appears that these surges in electronic requests from veterans are still testing VA’s response capability.

This call center has even received interest from the House Committee on Veterans’ Affairs. According to their own test of the VA call center, “On the first day, after being initially disconnected and after waiting for an hour, it took roughly another hour and 45 minutes in total to reach a human call center representative.”

VA is receiving more requests from veterans, resulting in more hours, but it appears the agency is producing the same poor outcomes.

In addition to VA’s stated goal to improve the process for veterans, President Obama has called on all agencies to “streamline, expand, or repeal” certain burdensome regulations. A review of the agency’s most recent retrospective review plan found VA only listed six regulations for repeal or modification. VA’s six rules compares to the Department of Transportation’s 94 rulemakings up for review. In addition, just three of VA’s regulations were actual rulemakings; the other three were reforms to existing paperwork, but other new regulatory burdens dwarf those reforms.

Below is a process that a hypothetical veteran could encounter applying for VA benefits:

It’s more than three hours of paperwork, six forms, and almost $96 worth of time.

AAF has devised a solution to cut the application time by more than a third (70 minutes), save $35, and eliminate two forms:

VA has more than 550 different forms that veterans, doctors, and the administration must manage to provide care. However, veterans and providers are unable to submit a vast majority of these forms electronically. According to administration records, there are 245 paperwork requirements with forms, but only 30 “can be submitted electronically” (just 12 percent).

Electronic filing typically saves time, money, and reduces the probability that forms will be damaged or lost. AAF examined the impact of VA’s ever-increasing regulatory burdens. If VA had moved to all electronic reporting and managed to freeze overall paperwork in FY 2011, when they knew of early troubles with wait times, the administration could have saved more than 2.2 million burden hours. That’s the equivalent of saving 1,100 employees from working 2,000 hours a year filing out VA paperwork. The chart below displays the difference between a freeze in rising paperwork levels and actual VA regulatory burdens.

After more than a year of public outrage over backlogs and poor treatment, VA has not been able to reduce its red tape and manage its paperwork burden. At 8.7 million hours, its regulatory burden imposes substantial obstacles to veterans seeking care. Despite an executive order and public pleas to reduce barriers to veterans’ benefits, VA has added more than a dozen forms and 1.5 million hours of paperwork.