After $14 billion in regulatory costs, regulators managed to add another $5.3 billion in burdens. Beyond the staggering regulatory costs, rulemakings also imposed 7.7 million paperwork burden hours. The Food and Drug Administration (FDA) led the week, with two food safety final rules. In addition, EPA’s oil and gas methane proposal finally landed in the Federal Register. The per capita regulatory burden for 2015 is $486. 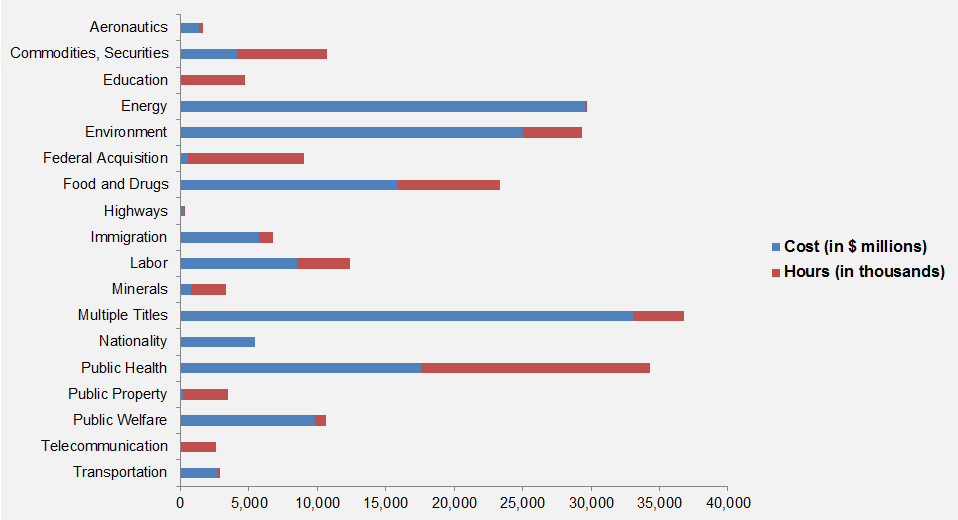 As AAF outlined here, EPA’s new methane proposed rule for fracking contains substantial new burdens: $420 million in costs and more than 92,000 paperwork burden hours. This proposal is part of a broader $2.6 billion imposition on oil and natural gas facilities, despite their promise for clean and affordable energy. This rulemaking is also in the context of falling methane emissions nationwide.

FDA finalized two food safety rulemakings for animal and human food consumption. As AAF detailed here, the combined cost of the rules are $4.7 billion and more than 7.4 million paperwork burden hours. The human food rule will require a reduction of 157,000 food borne illness for the benefits to justify the costs, according to regulators. Surprisingly, both measures admit they will impose significant economic burdens on a substantial number of small businesses.

Since passage, based on total lifetime costs of the regulations, the Affordable Care Act has imposed costs of $47.9 billion in state and private-sector burdens and 165.9 million annual paperwork hours.

The Securities and Exchange Commission (SEC) proposed an amendment to its Security-Based Swap Data Repositories. The proposal adds slightly more than $100 million in total costs and imposes 36,000 paperwork burden hours.

Click here to view the total estimated revised costs from Dodd-Frank; since passage, the legislation has produced more than 67.3 million paperwork burden hours and imposed $35.1 billion in direct compliance costs.

Since January 1, the federal government has published $156 billion in compliance costs ($67.77 billion in final rules) and has imposed 70.5 million in net paperwork burden hours (22.68 million from final rules). Click below for the latest Reg Rodeo findings.

Last week, of course, marked the transition from the Trump Administration to the Biden Administration. This marks an end to the cost-cutting mindset and…