Total costs were modest this week, with $66 million in burdens, compared to $42 million in annualized costs and $334 million in benefits. Thanks to a Department of Education (ED) proposal, paperwork accelerated by more than 3.6 million hours. One Dodd-Frank proposal contained minor burdens.

In its “Program Integrity and Improvement” proposal, ED aims to amend the “cash management” rules for student aid. The goal of the rule is to help students, but this comes with a cost. ED estimates $21 million in annual burdens and more than 3.5 million paperwork hours. If approved, ED would impose the largest amount of paperwork in the agency’s history. Most of these costs would fall directly to colleges and universities already laboring under increased regulations.

The Department of Transportation (DOT) proposed a rule to cover novelty motorcycle helmets and set dimensional and compression requirements for all helmets. Costs of the proposal are minimal and the agency estimates that benefits could exceed $300 million.

Since passage, based on total lifetime costs of the regulations, the Affordable Care Act has imposed costs of $43.8 billion in state and private-sector burdens and 164.8 million annual paperwork hours.

The Treasury Department proposed a measure to regulate transactions “involving national banks and Federal savings associations.” These changes implement section 612 of Dodd-Frank. The agency estimates costs of more than $17 million or $15,400 per entity.

Since January 1, the federal government has published $67 billion in compliance costs ($42.1 billion in final rules) and has imposed 26.9 million in net paperwork burden hours (5.8 million from final rules). Click below for the latest Reg Rodeo findings. 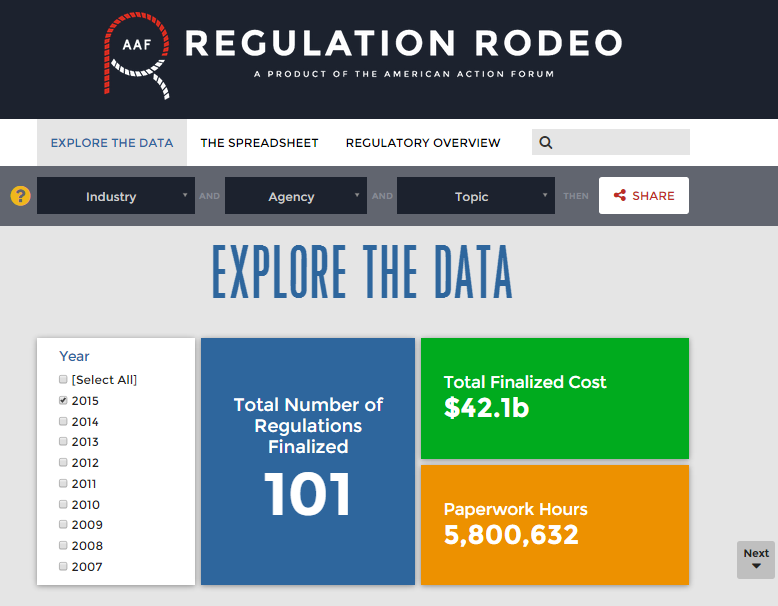