Another Billion in Regulatory Costs

This week, the American Action Forum (AAF) launched five years of research: Reg Rodeo. The online database contains information on every federal rule with a quantifiable cost or paperwork burden since 2008. Users can search federal rules by the affected industry, agency, or by law (Affordable Care Act or Dodd-Frank). If users really know their stuff, there is a function to type in the name of the regulation to return a result.

For the most recent data (this week), regulators published more than $1 billion in total costs, $5 billion in benefits, and 2.4 million paperwork burden hours. A pair of Securities and Exchange Commission (SEC) rules implementing Dodd-Frank and an EPA rule on furnaces led the week. 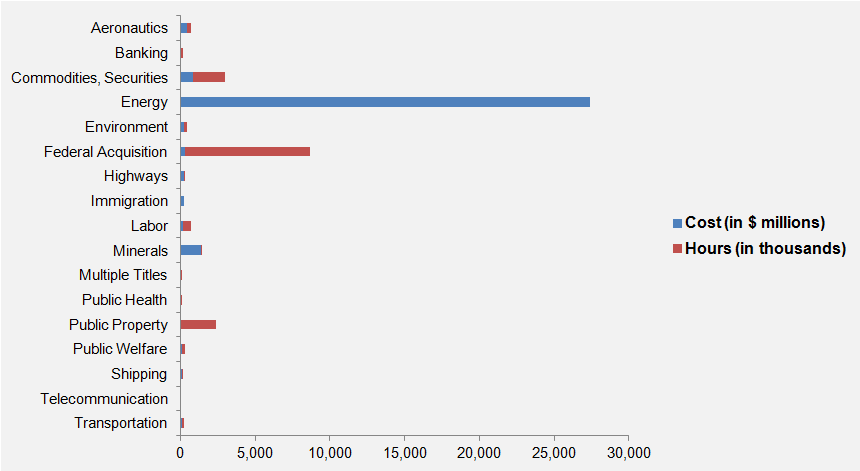 SEC published a pair of rules governing security-based swap repositories. Combined, they will impose total costs of $843 million and generate more than two million paperwork burden hours, according to the convoluted cost-benefit analysis that SEC released.

EPA finalized a rule for “Hydronic Heaters and Forced-Air Furnaces.” Although its annual costs do not rise above $100 million annually, denoting “economically significant” status, the lifetime costs of the measure could eclipse $180 million. EPA does note that benefits, $5 billion, greatly exceed costs.

Since passage, based on total lifetime costs of the regulations, the Affordable Care Act has imposed costs of $43.8 billion in state and private-sector burdens and 163.5 million annual paperwork hours.

Click here to view the total estimated revised costs from Dodd-Frank; since passage, the legislation has produced more than 65.6 million paperwork burden hours and imposed $33.3 billion in direct compliance costs. Based on calculations from the Financial Services Roundtable, Dodd-Frank regulations would require 32,826 employees to file federal paperwork.

There was one major change in paperwork burdens, which is defined as an hourly burden increase or decrease of 500,000 hours or greater. The SEC cut 9.2 million hours of paperwork, while HHS added 433,000 hours.

Since January 1, the federal government has published $31.6 billion in compliance costs and has imposed 15.9 million in net paperwork burden hours. Click here for our new comprehensive database of regulations and rulemakings promulgated from 2008 to 2015.

Looking just at the top-line net totals from last week, it is easy to think that this was yet another ho-hum week in the Federal Register. Across all rulemakings…