It was a historic week for regulation, with $18.9 billion in total published costs. Regulators added $1.7 billion in annual burdens, compared to $4.9 billion in benefits, and 4.4 million paperwork burden hours.

For perspective, this week’s burden equates to $57.74 per person in the U.S. Last year, AAF predicted roughly $143 billion in total regulatory costs for 2014, and barring a significant deregulatory surge, the administration will blow past that prediction. Currently, regulators have proposed or finalized more than $150 billion in costs. 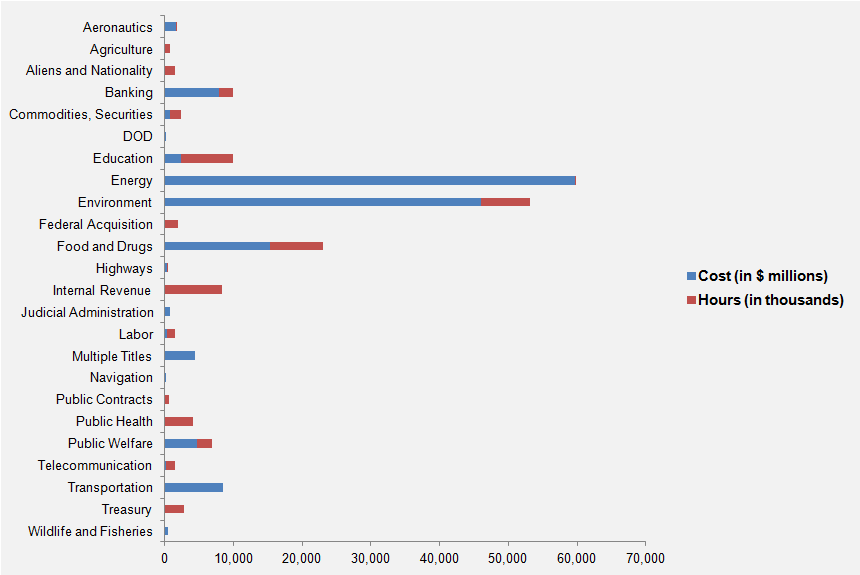 The biggest cost drivers this week were from FDA’s revised food safety proposals. Although slightly less expensive than early iterations, they still impose substantial costs. AAF reviewed all four here and here. If finalized as written, they would impose a combined $1.2 billion in costs and 4.2 million paperwork burden hours, relative to $930 million in monetized benefits.

The Department of Energy (DOE) proposed the second notable rulemaking this week, new efficiency standards for air conditioners. The figure of $507 million in annual burdens might not be headline-grabbing, but this is the first DOE rule that AAF reviewed which acknowledged it could reduce industry employment. It also conceded that it would have a significant impact on small businesses and would raise prices on consumers.

Since passage, based on total lifetime costs of the regulations, the Affordable Care Act has imposed revised costs of $27.2 billion in private-sector burdens, approximately $13 billion in costs to the states, and 162.1 million annual paperwork hours.

There was a proposed rule from Dodd-Frank this week, but it imposed just minor paperwork burdens. Click here to view the total estimated revised costs from Dodd-Frank; since passage, the legislation has produced more than 63.8 million paperwork burden hours and imposed $29.9 billion in direct compliance costs. Based on calculations from the Financial Services Roundtable, Dodd-Frank regulations would require 31,940 employees to file federal paperwork.

There were three major changes in paperwork burdens, which is defined as an hourly burden increase or decrease of 500,000 hours or greater. The Department of Health and Human Services had the largest decrease, at 1.9 million hours.

Since January 1, the federal government has published $150.5 billion in compliance costs and has imposed 30.4 million in net paperwork burden hours. Click here for our comprehensive database of regulations and rulemakings promulgated in 2014.

A Blast From the Past

This past week there was a Securities and Exchange Commission (SEC) proposal with substantial increases in paperwork requirements and then not much else.…