Just before Christmas, the Department of Health and Human Services (HHS) announced that it would suspend shipments of several—though not all—monoclonal antibody therapies used to treat COVID-19 to states based on evidence that they are not effective against the Omicron variant. At the time, HHS justified the decision by citing estimates from the Centers for Disease Control and Prevention (CDC) that Omicron accounted for 73 percent of the COVID-19 cases in the United States. Those estimates have since been shown to be too high, and on December 31, 2021, HHS resumed shipments of all monoclonal antibody therapies. There are a host of issues radiating from this kerfuffle, and it’s more complicated than it might first appear, but stepping back, the episode does provide a window into what a single-payer, government-run health care system would look like.

First, it’s important to recognize that the situation around monoclonal therapies is more nuanced than the public discourse has reflected. The reality is that some, though not all, of these therapies are clearly less effective against Omicron, and so using them to treat Omicron patients is largely pointless. And it’s not just federal health officials saying this: Regeneron—the manufacturer of one of the therapies in question—has publicly stated that their treatment has “diminished potency against Omicron.” HHS did continue the distribution of monoclonal therapies that have proved to be effective against Omicron, but supplies of all therapies are insufficient to meet demand.

Additionally, most doctors are not able to easily differentiate between variants of COVID-19, and so while Regeneron’s therapy is quite effective against Delta, a patient with Omicron would need a different therapy. Unable to quickly and easily determine what type of COVID-19 a patient has, it might make sense for doctors to decide to treat all cases in an area as if they are the dominant strand, which is effectively what HHS was doing by withholding certain therapies. But there’s a big difference between doctors or a hospital system making such a determination based on trends in their patient population, region, or state, and federal bureaucrats making that decision based on nationwide estimates, especially when those estimates turn out to be wrong. While the CDC ultimately determined that Omicron (currently) accounts for 59 percent of cases nationwide, there is variation across the country. For example, Omicron only accounts for 44.5 percent of cases in Massachusetts. Even if the CDC estimate that 73 percent of COVID-19 cases nationwide were caused by the Omicron variant had been correct, this still means that 27 percent of COVID-19 patients could have benefited from the therapies being held back amid insufficient supplies of all monoclonal antibody therapies.

Treating all patients as if they have Omicron might be the right approach under specific circumstances, or in a particular state or region. I’m not a medical professional and such decisions are outside my purview. But it’s also not the place of federal bureaucrats or politicians—or those at the state level, for that matter—to make blanket decisions about treatment options. Decisions about how best to treat patients should be made by the providers on the ground, based on the trends they’re facing.

Ultimately, someone at HHS decided that certain therapies shouldn’t be available to patients in the United States, and so for a week they weren’t. That’s not how health care normally works in the United States, and it’s not how most Americans would want health care decisions to be made. But such outcomes would be typical under the single-payer, government-run system for which progressives have long agitated.

The No Surprises Act, which places the burden of out-of-network charges on hospitals and insurers rather than patients, took effect at the start of this year, providing Americans relief from expensive and unexpected out-of-network costs. While certain court cases still need to be settled, it looks like Americans will have one less thing to worry about in 2022. But how does surprise billing happen in the first place? As it turns out, not everyone providing services in a hospital is technically part of that hospital’s system. The chart below compares the percentage of emergency and non-emergency visits with at least one out-of-network charge (in red) with the average percentage of shoppable services in a hospital provided by various independent providers (in blue). As the chart shows, 16 percent of non-emergency hospital visits had at least one out-of-network charge, while 18 percent of emergency visits had at least one. Why this happens so often becomes clear when we see that, in hospitals, independent practitioners provide on average 83.23 percent of medicine and surgery services, 80.87 percent of radiology services, 19.71 percent of evaluation and management services, and 18.25 percent of laboratory and pathology services. Due to their independent status, it is not surprising that more than a few of these providers operate out-of-network. 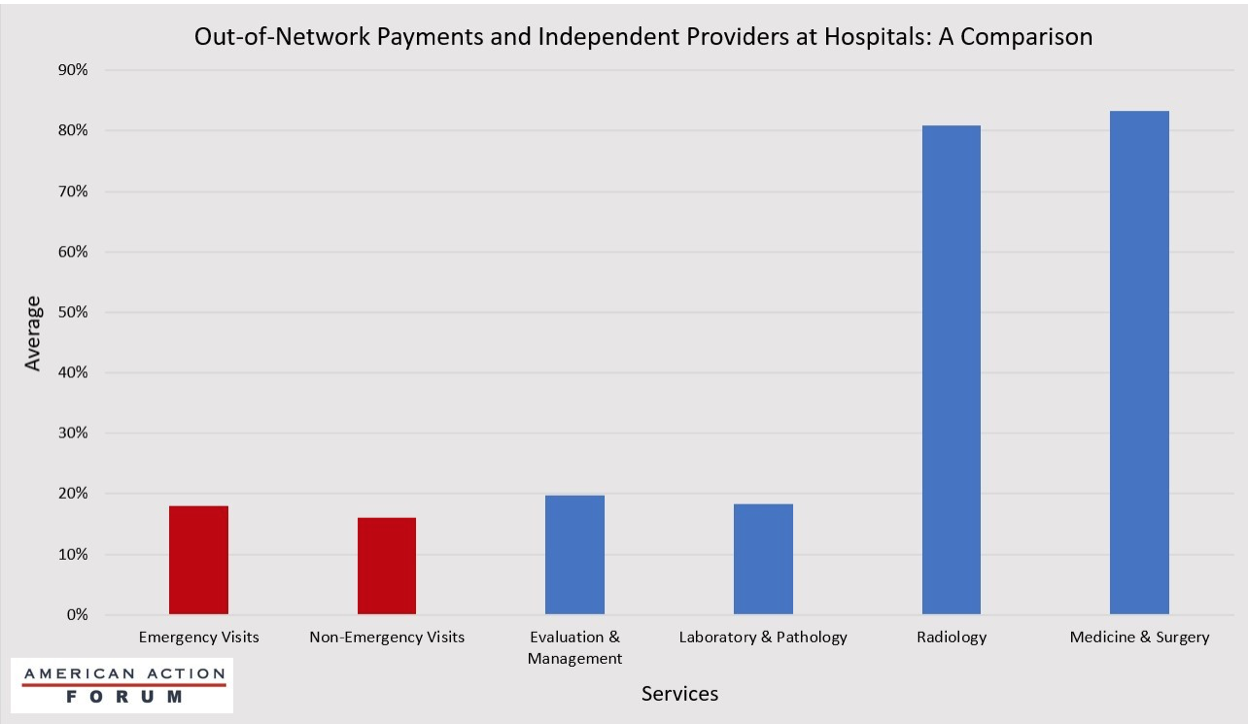 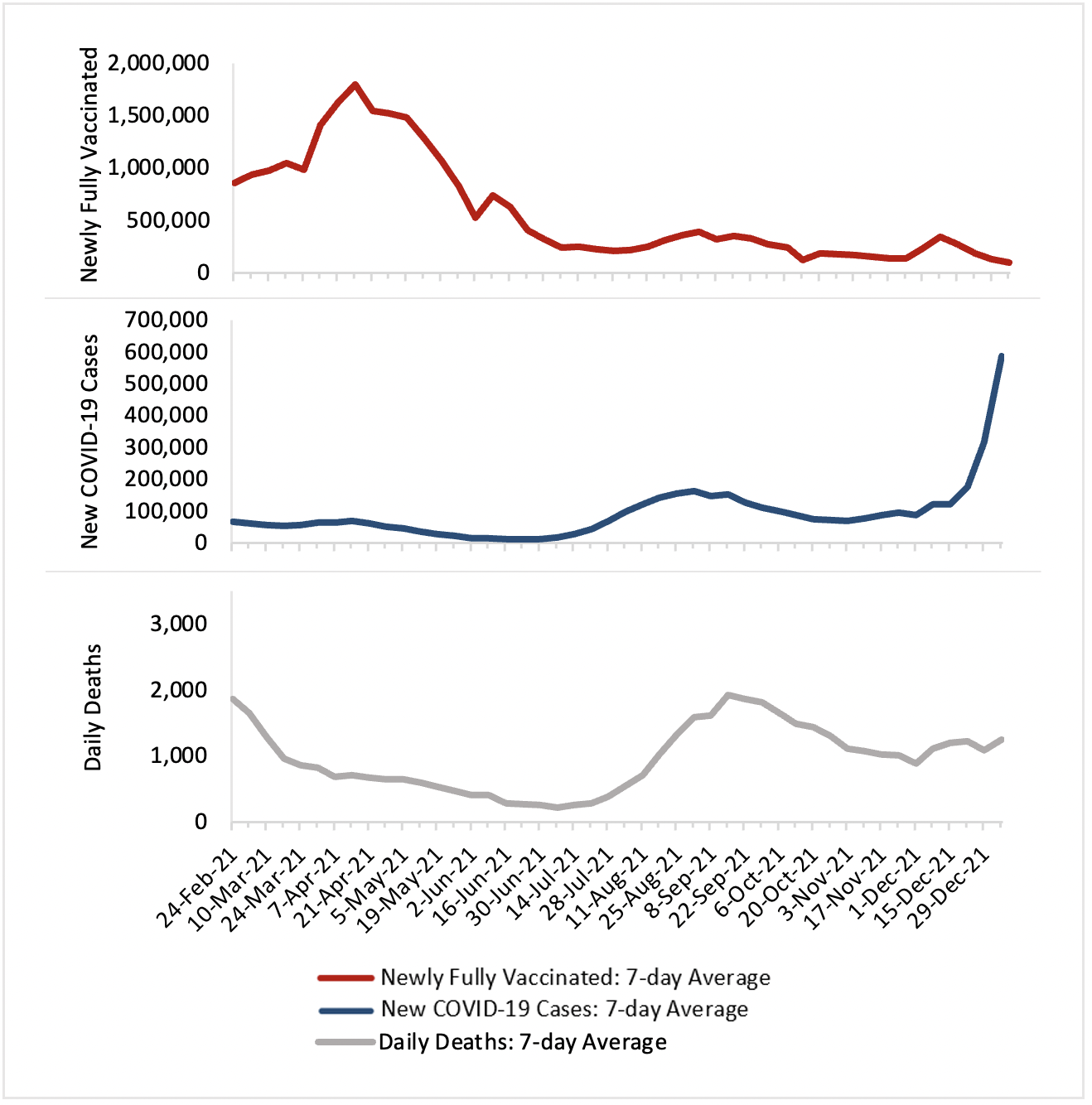