The Children’s Health Insurance Program (CHIP) was designed in 1997 to provide health insurance to children whose family income exceeded Medicaid eligibility, but was insufficent to purchase private coverage.  However, with the implementation of the Affordable Care Act (ACA), many families no longer need CHIP. With funding set to expire next year, the question becomes: who still needs CHIP? 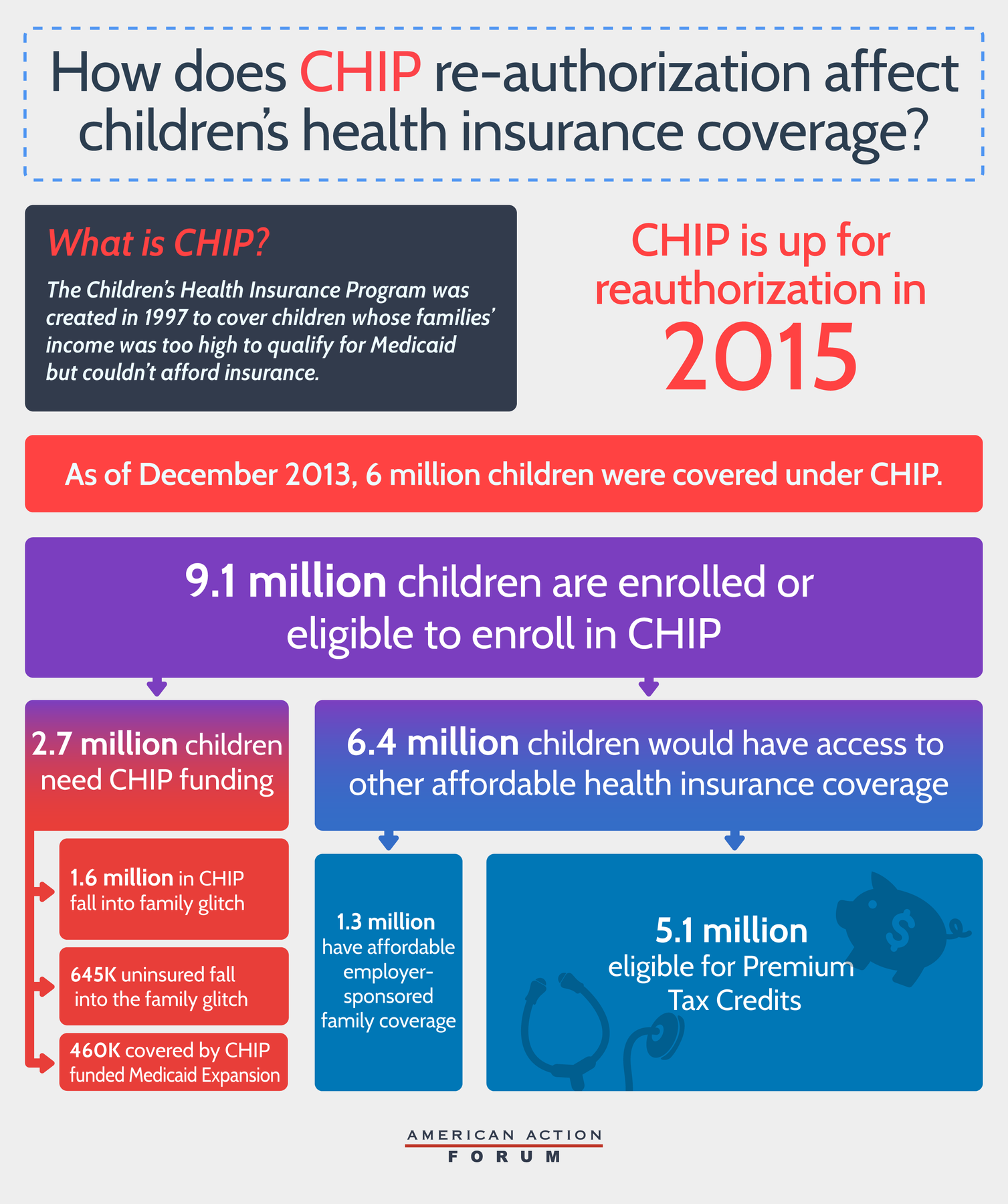 With premium tax credit and CHIP eligibility levels almost entirely overlapping, as many as 5.1 million CHIP eligible children would qualify for a subsidized family plan purchased through the Health Insurance Marketplace in the absence of CHIP.[1] For another 1.3 million CHIP children, one or both of their parents have access to affordable employer sponsored family insurance coverage.

Unfortunately, some children whose parents have an offer of employer sponsored coverage fall into the “family glitch.” Under the ACA—as interpreted by the Internal Revenue Service—employer sponsored coverage is determined to be affordable if coverage for the employee alone is less than 9.5 percent of his or her income. Regardless of whether coverage that extends to the employee’s family is unaffordable, the entire family is disqualified for premium tax credits. Roughly 1.6 million children currently enrolled in CHIP would fall into this glitch, as well as 645 thousand uninsured but CHIP eligible children.

Many states used CHIP funding to expand Medicaid programs up to the minimum premium tax credit eligibility levels. While it is unlikely that children covered through CHIP funded Medicaid programs—460 thousand in total—would lose coverage if CHIP were not re-authorized, they may suffer from decreased benefits as states struggle to absorb the budget impact of lost federal funds.

We assess the eligibility options of CHIP enrolled or uninsured and CHIP eligible children through an analysis of Survey of Income and Program Participation data from April 2013. We use household composition and income to determine a given individuals eligibility for tax subsidies or other public insurance, such as Medicaid and CHIP. Households are composed of a taxpayer and spouse, if applicable, and tax-dependent children or relatives in the household. Tax dependents are defined as children under the age of 19, full-time students between 19 and 23 years old, or family members in the household that earn below the income tax filing threshold. Any individual, along with a spouse if applicable, is considered to be a taxpayer if that individual or couple earns more than half of household income. If there are multiple taxpaying and tax-dependent relatives in a household, all tax-dependent relatives are dependents of the highest earning family member. Household income is the sum of all income of individuals within a household, less any means-tested cash transfers.

A household is considered to have access to affordable employer-sponsored self-only coverage if a taxpayer or spouse obtains health insurance through an employer and if the average single coverage employee contribution is less than 9.5 percent of household income. According the Medical Expenditure Panel Survey-Insurance Component, the average employee contribution for single coverage was $1,170 in 2013. The same household income threshold of 9.5 percent applies when determining if a household can afford an average employer sponsored family plan, which cost $4,421 in 2013. The infographic above relates only to children determined to be enrolled in CHIP or eligible for enrollment but uninsured. We limit our analysis to legal residents.

[1] CHIP eligibility varies by state, and CHIP funding is used by some states to fund certain brackets of Medicaid eligibility as well.