Comments to the FCC on Net Neutrality and Title II Reclassification

Executive Summary
New pushes in the network neutrality debate are threatening to place much of the Internet sector under a new burdensome regulatory regime that could hinder growth and insert regulatory uncertainty into countless companies, including small startups. The

regime, known as Title II reclassification, would place broadband under telephone regulation in order to ban certain network practices. But the ensuing legal morass is not likely to achieve the intended goals. Meanwhile, the broader Internet sector could come under these proposed rules. Of all the proposals suggested, reclassification poses high costs with the little, if any, rewards.

Introduction
In the recent Verizon v FCC decision, the DC Circuit shot down two of the three network neutrality rules, reasoning that “the [Federal Communication] Commission has chosen to classify broadband providers in a manner that exempts them from treatment as common carriers.”[1] Because “the Communications Act expressly prohibits the Commission from nonetheless regulating them as such,” both the no blocking and no discrimination rules were invalidated. Some now argue that reclassification of broadband is needed.  We’ve been at this impasse before. Reclassification of broadband from an “information service” regulated under Title I to a “telecommunication service,” regulated under Title II was floated in 2010, only to be rejected for a host of legal and economic reasons.[2]

Regulatory principles that were meant to apply to a telephone industry would be applied to broadband for the first time. More alarming, the entire Internet sector, which represents nearly $1 trillion of GDP and growing, could get swept up into the regulations. The result would be a wave of uncertainty for countless Internet companies, both small and large. At a time when there is a major push to rewrite the Communications Act to reflect the modern landscape, Title II reclassification is a step back.

Legal Uncertainty in Title II Reclassification
Without network neutrality regulation, advocates worry that a regime of pay-to-play arrangements would result, leading to fewer innovations in the Internet and a stifling of speech. Title II reclassification is seen as one way to end all paid prioritization deals. However, nothing in Title II explicitly prohibits paid prioritization. The only clear limits outlined in the Communications Act come via Section 202(a) which prohibits “unjust or unreasonable discrimination.” Yet, if a carrier offers similar terms and conditions, so long as they are offered to all comers, that practice would then probably be legal. Differentiation in the terms of service is the norm in Title II, as it would be with broadband.[3] The banning of paid prioritization is the end goal, but reclassification doesn’t guarantee this outcome.

Reclassification is no simple policy matter either. For one, the change would reverse a string of rulings made by the Commission in 2002, 2005, 2006 and 2007 where it classified cable broadband, DSL, powerline broadband, and wireless broadband each as information services. The Communications Act does not grant the FCC authority to unilaterally decide what is considered a telecommunications service; that decision was already made by Congress. Most importantly, when the Commission was challenged on these classifications, it won its case before the Supreme Court in National Cable & Telecommunications Association v. Brand X.

In that case, the Supreme Court outlined just a few of the economic problems with reclassification:

“Service providers would be under a new federal duty to furnish ’communication service upon reasonable request therefore’; to charge ‘just and reasonable’ rates; to refrain from engaging in ‘unjust or unreasonable discrimination’; to comply with FCC requirements for filing and abiding by written tariffs; and to interconnect with other carriers… The effect of the increased regulatory burdens could lead cable operators to raise their prices and postpone or forego plans to deploy new broadband infrastructure, particularly in rural or other underserved areas.”[4]

While these federal duties might seem innocuous, each has been highly litigated and costly to implement which should similarly be expected in reclassification. Consumers ultimately bear these costs. Given the legal definitions involved and just how far the FCC has pushed their legal reasoning in the past, Internet companies could be thrown into the Title II bucket along with broadband providers, which would include countless more duties than those outline above.[5] Reclassification potentially burdens huge swaths of the Internet industry under Title II regulation.

While an estimation of the cost is difficult, two lines of thought give a sense of the threat these changes pose. For one, an exploration of the size of the Internet ecosystem helps to illuminate just how much of the economy could be affected by these new regulations. Also, an exploration of the problems and inefficiencies associated with Title II shows that the regime should not be repeated in the broadband space.

New Burdens on Businesses, Both Small and Large
Stretching back to 1998, the FCC has expressed concern that reclassification could chill innovation in the Internet ecosystem.[6] The Internet sector is a significant portion of the economy and growing. This sector is estimated to be about 5 percent of GDP, larger than agriculture, transportation and the house rental sectors combined.[7] This category includes computer and electronic product manufacturing; software publishers; broadcasting and telecommunications; data processing and hosting services; internet publishing; search engines; and other online services.

In total, estimates suggest that the Internet sector supports about 2.6 million jobs across a number of small and large companies.[8] 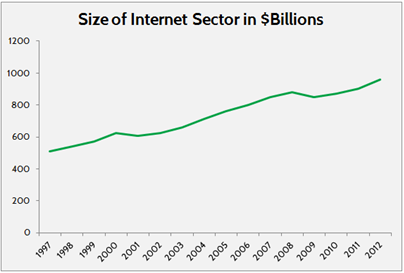 Innovation in this space has been a key to recent growth. From 2004 to 2009, nearly 15 percent of all economic growth came from innovations in the Internet space.[9] Even while the rest of the economy was anemic in the economic downturn, the Internet sector still grew.  The companies vary widely from small businesses and entrepreneurs to medium and large firms. For example, in the wake of the smartphone’s broad adoption, app developers soon popped up and the industry now supports 752,000 full and part time employees.[10] Mom-and-pop stores all over the US have grown their businesses through their eBay store fronts, Etsy pages, and web presences. Nearly 88% of US-based Etsy sellers are women, most with low-and moderate-incomes. [11] New rules would affect an entire range of businesses.

As Cabot Orton of the Vermont Country Store said recently in a hearing, “Today, our business depends dearly on the Internet. We rely on the Web to display our merchandise to customers, to connect with new audiences and to transact a large portion of our sales.”[12] Just as their 450 employees depend on the company, the company relies on the Internet to sell their products. In total, Pew counted about 3.9 million jobs in the American workforce as part of the “core” tech occupations, which this change would influence.[13] The large scale upgrade of America’s wired and wireless infrastructure has been good for the average American, as nearly 850,000 jobs come from the telecommunications sector.[14] Yet, these numbers do not reflect the ancillary services that are enabled by the Internet, including the ad-supported digital industry that directly employs 2 million Americans.[15]

Reclassification is not a small regulatory feat nor is it a small step as many proclaim. Moreover, Title II has a checkered past, especially as the cracks of a nearly 20 year old regulatory structure are starting to show.

Title II’s Previous Missteps
Countless features of Title II should give regulators pause, but to see the entire regime at work, it is helpful to look at AT&T’s current transition from old to new network architecture. In conjunction with a $6 billion wireline network upgrade, AT&T has recently sought reform of significant portions of Title II. Investment breakdowns suggest that nearly 53 percent of their wireline capital expenditures are buried into the legacy systems, even though consumers are leaving this network in droves.[16]

As the FCC’s plan for Internet infrastructure, the National Broadband Plan, explained, “Regulations require certain carriers to maintain POTS [Plain Old Telephone Service]—a requirement that is not sustainable—and lead to investments in assets that could be stranded. These regulations can have a number of unintended consequences, including siphoning investments away from new networks and services.”[17] Shifting consumer preferences are being matched by significant changes in network architectures in broadband. But telephone systems are languishing because of Title II regulations. Even though the law has yet to be set into stone, broadband could suffer similar problems if reclassified.

Conclusion
Title II reclassification poses far more risks than it provides in rewards, all in the name of banning paid prioritization. While some argue for the legal change, huge questions about its efficacy remain. On the other hand, nearly 5 percent of the economy and millions of jobs could be swept up in the FCC jurisdiction, and broadband providers might be subject to rules limiting its ability to invest. Just how far the FCC would go in mandating price controls and other requirements of Title II is not clear, but the costs to consumers, businesses, and the future health of the Internet are.

[3] See Jim Cicconi, Net Neutrality and Modern Memory, http://www.attpublicpolicy.com/fcc/net-neutrality-and-modern-memory/ for current industry practices within Title II and Larry Downes, The Biggest Net Neutrality Life of All, http://www.forbes.com/sites/larrydownes/2014/07/17/the-biggest-net-neutrality-lie-of-all/2/ for a breakdown of the basic legal question.

[5] Robert E. Litan, Regulating Internet Access as a Public Utility: A Boomerang on Tech If It Happens, http://www.brookings.edu/research/papers/2014/06/regulating-internet-access-public-utility-litan.

[6] In the Matter of CC Docket No. 96-45 Federal-State Joint Board on Universal Service Report to Congress, http://transition.fcc.gov/Bureaus/Common_Carrier/Reports/fcc98067.pdf.

[11] In the Matter of Open Internet Remand Framework for Broadband Internet Service,  https://blog.etsy.com/news/files/2014/07/Etsy-Open-Internet-Comments-7.8.14.pdf.

Comments of Jeffrey Westling[1] This Second Further Notice of Proposed Rulemaking (FNPRM)[2] comes at a critical time. The National Telecommunications…

Letter on Oversight of the National Telecommunications and Information Administration

Implementing the Infrastructure Investment And Jobs Act: Prevention and Elimination of Digital Discrimination

Comments of Jeffrey Westling[1] This NOI begins a congressionally mandated examination of equal access to broadband, as well as potential deployment…