I appreciate the opportunity to comment on the Environmental Protection Agency’s (EPA) proposed regulation, titled “National Ambient Air Quality Standards for Ozone.” This rulemaking is potentially one of the most consequential regulations in recent years, with cost and benefit estimates in the billions of dollars for any of the three standard levels under consideration. However, this comment focuses primarily on the proposal’s intrinsic feasibility under some of the agency’s own assertions and assumptions. The two areas I address in particular are: 1) unknown control technologies, and 2) the transportation of ozone.

Although EPA cannot technically consider costs and benefits in determining its standards, it is worth examining the feasibility of their control requirements in attaining the stated goals. In this regard, the issue of “known” versus “unknown” control technologies raises multiple issues. First, EPA readily admits that a significant portion of their estimated reductions involves unknown control technologies. Second, this uncertainty in the amount of known attainment capability becomes progressively greater under each more stringent standard level. And finally, many of EPA’s own assumptions and analyses call into question the basic feasibility of these unknown controls, and thus challenge the overall viability of the proposal’s goals.

As EPA notes, unknown controls account for significant portions of estimated emissions reductions across all standard levels under consideration. Despite the inherent uncertainty, the following table details the potential apportionment of emissions reductions. 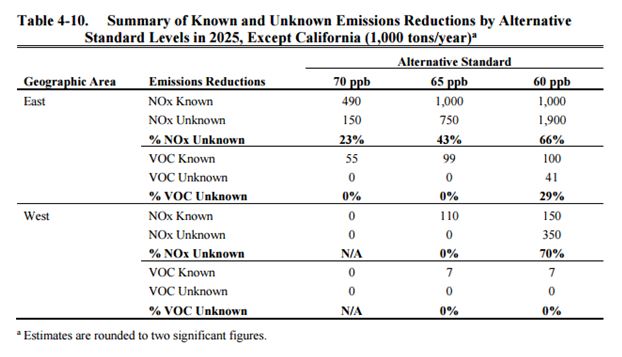 However, it is not simply a matter of uncertainty regarding the level of emissions the regulation needs to control, but rather the uncertainty facing those entities that would control them. In the Regulatory Impact Analysis’s (RIA) examination of costs and benefits, EPA uses the “average cost methodology” to extrapolate an estimate of the unknown control costs. As the table below shows, each standard level’s extrapolated costs take up an increasing majority of its overall costs as the standard becomes more stringent.

Earlier in the RIA, EPA discusses the potential “crowding out” effect that super-imposed control requirements might have on stakeholders’ overall operations.

Although EPA’s discussion includes caveats that attempt to downplay this effect, it still states that firms will have to make choices, particularly in terms of the research and development (R&D) of energy technologies. This is problematic for at least two reasons.

First, the relatively large share of control costs in the unknown category will necessarily involve a relatively larger share spent on R&D. Unknown control methods are, by definition, not currently understood. Thus, a firm – or industry as a whole – must research and develop them. If that part of the process is overwhelmingly costly, then it has serious ramifications for that firm’s operational plan, even under the constraining caveats that EPA invokes.

Second, even assuming that the opportunity costs only apply to a given firm’s energy-related R&D, this has serious implications due to recent EPA actions and proposals. As EPA notes, part of their regulatory baseline includes other rulemakings that, per agency claims, bring co-benefits of reducing ozone even if that rule does not focus on that goal. Taking the cost estimates from that set of rules since 2008 yields a regulatory cost baseline of $19.6 billion annually, a significant sum.

If the crowding out principle holds in regards to these rules as well, it is possible that the control costs that stakeholders have faced or will face could necessarily affect their ability to respond to this proposal’s requirements. While there may be some overlap in control technologies across emission type, there are key differences. And, as each new emission standard accumulates, they have an effect on the ability of a firm – given scare resources – to meet future standards, including this proposal.

The other main area of uncertainty in terms of the proposal’s viability comes from the nature of how ozone emissions travel and how feasible certain control measures will be in actually attaining reductions. It is one thing to impose control options on an emission source, but the nature of how ozone travels in the atmosphere means that certain areas that would not generally seem to be emission producers face nonattainment status. While EPA allows for flexibility in states’ implementation plans, the nature of this transported ozone means that emissions cross between ambiguous jurisdictions and leave questions of how non-emitting nonattainment areas remedy that distinction.

As EPA notes in the RIA:

Section 179B authority does not allow the EPA to avoid designating an area as nonattainment or for the area to be classified with a lower classification than is indicated by actual air quality. Generally, monitoring data influenced by international transport may not be excluded from regulatory determinations, unless the data are influenced by an excludable exceptional event. Section 179B also does not provide for any relaxation of mandatory emissions control measures (including contingency measures) or the prescribed emissions reductions necessary to achieve RFP.

Given the scope and scale of this proposed rule, EPA ought to address these issues more thoroughly. The following map illustrates this point.

One of the American Action Forum’s (AAF) most curious findings was that, according to atmospheric monitors in certain national and state parks, 100 publically protected land areas could be in nonattainment status under at least one of the proposed emissions standards. AAF has illustrated the distribution in the map below:

It should be rather obvious why this is problematic. As lands protected by either the state or federal government, it is virtually impossible to think that the emission levels recorded in these parks emanated from within their borders. It is difficult to see how such areas implement controls, if there is nothing to control. And while each state’s attainment designation comes from a state-wide calculation, it is difficult to forecast how some of the states account for both their emitter-heavy areas and these non-emitting – presumably cleaner-than-average areas – given EPA’s stated reluctance to even grant applicable exemptions. In addition, it is not entirely clear who is responsible for bringing nonattainment national parks into compliance with the new standards: states or the federal government.

Particularly with regard to federal lands, some of the parks run across state borders. Considering that EPA proposes that states determine an implementation plan for their own attainment status, having portions of their jurisdiction affected by forces outside of their direct control presents certain complications. EPA ought to further address this issue as it calls into question how feasible it may be for certain states to comply.

Thank you again for the opportunity to comment on this rulemaking. As many other commentators have noted, the economic scale of this rule is staggering. Beyond simple dollar figures, the level of uncertainty facing stakeholders both  implementing emissions controls and in nonattainment – through no fault of their own – raises serious concerns about the proposal’s viability.

Introduction Following an investigation under Section 301 of the Trade Act of 1974, the Office of the United States Trade Representative (USTR) determined…

I. Introduction & Summary The Federal Trade Commission (FTC) has a long and important history protecting consumers from unfair and deceptive acts or…

Comments on Credits for Clean Vehicles in the Inflation Reduction Act

Introduction The Inflation Reduction Act’s clean vehicle tax credits include rules of origin for a vehicle to qualify for the credit. Specifically…

Comment to CMS on Request for Information for Medicare Advantage

Dear Administrator Brooks-LaSure, I thank you for the opportunity to comment on the August 1, 2022, Request for Information (CMS-4203-NC) seeking information…