The Wall Street Journal reports this morning that the Administration is falling considerably short of its enrollment goals for the ACA during the first month of open enrollment.  “Initial reports suggest that fewer than 50,000 people successfully navigated the troubled federal health-care website to enroll in private health insurance plans as of last week, two people familiar with the matter said Monday.”

These numbers fall well short of the markers set by in the administration before the enrollment period started. “The early tally falls far short of internal goals set by President Barack Obama's administration in the months leading up to the opening of the HealthCare.gov site Oct. 1, and the low number has worried health insurers that are counting on higher turnout.”

Politico reports on the lower than expected enrollment numbers, “The Obama administration declined to confirm the Wall Street Journal figures. They have said the totals for the first month would be “very low” because of the web site problems. “We cannot confirm these numbers,” Department of Health and Human Services spokeswoman Joanne Peters said. “[A]s we have said, the problems with the website will cause the numbers to be lower than initially anticipated.” HHS intends to release its first round of enrollment figures later this week.” The administration has stated they need 7 million enrollees over the six month enrollment period.

Last week, EPA wrapped up the last of eleven listening sessions held to solicit input on how to regulate carbon pollution from existing power plants under the Clean Air Act. The EPA is expected to  propose the regulation in June of 2014. They received input from a number of stakeholders, from individual citizens speaking of personal experiences to advocacy organizations pushing their vision for carbon limits. Yet, the 11 listening sessions all lacked the input from coal country. 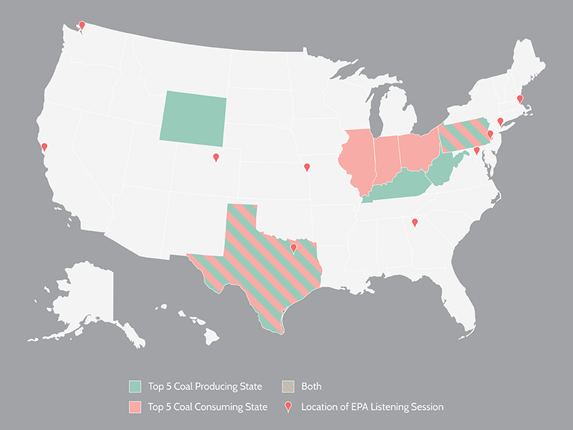 EPA held only two of eleven sessions in states that rank among the top five producers or consumers of coal. This is obviously a concern as the EPA is drafting regulations that will impact coal consumers and coal producers.

This administration needs a coal reality check. It is habitually overly optimistic about the prospects for unproven coal technologies, pushes regulations that cripple the industry’s ability to invest in its future, and ignores the very stakeholders that could help chart a better path.

When EPA proposed regulations for new electric generation facilities this fall, the agency held up Southern Company’s Kemper coal plant as a paragon for the future of the industry. Though the pioneering facility is expected to successfully capture and store 65 percent of its greenhouse gas emissions when it comes on line next year, it has also been plagued by delays and engineering shortcomings that caused a substantial $2 billion in cost overruns. Its unique location, fuel type, and government funding make it a poor example for future facilities. Yet, Energy Secretary Ernest Moniz maintains that carbon capture and sequestration technology “is ready.”

We still have seven months before EPA is expected to propose regulations for existing facilities. Hopefully they’ll use that time to develop a sober appreciation for what is possible with existing clean coal technologies, identify ways to strengthen their ties to industry partners, and learn that ignoring coal country is not good policy.