An Initial Analysis of the Green New Deal

Eakinomics: An Initial Analysis of the Green New Deal

The Green New Deal (GND) has rightly received a lot of attention in recent weeks. Everyone should read it. It is a sweeping policy plan setting out ambitious objectives for energy and economic policy, but it is also much more. It envisions re-engineering essentially every aspect of American society and its institutions. Top-down societal engineering should make you very (very, Very, VERY) nervous. One way to illuminate the scale of the proposals is via policy analysis, yet the very breadth of the proposals makes such an analysis difficult. Nevertheless, a bevy of AAF experts has collaborated on a short paper that constitutes an initial foray. The paper puts forward three broad conclusions: 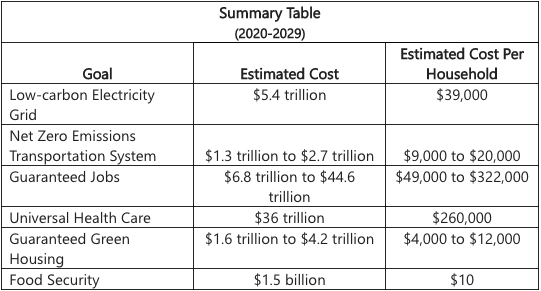 For me, a way to think about the GND is that it is simultaneously a radical overhaul of the production and use of energy in the United States (the “Green” part) and a sweeping revision of the nature of economic relationships in the society (the “New Deal” part). As the table clearly demonstrates, both are quite expensive. The green agenda — electricity grid, transportation system, guaranteed energy-efficient housing — adds up to $8.3 to $12.3 trillion over the next 10 years. The economic agenda — jobs, health care, food security — accounts for another $42.8 to $80.6 trillion.

Even if the estimates are 5 to 10 times too high (and I suspect they are more likely too low), it is hard to wrap one’s head around numbers these large. But if you manage to do so, be aware that the likely social upheaval would be even larger.

Is Budget Process Reform the Answer?

One often hears the assertion that “the budget process is broken.” And there is often the implication that this is somehow the explanation for the…

If the 2011 debate is any guide, be prepared for lots of discussion about “tipping points” associated with high levels of federal debt. For simplicity…

The Unionization Rate Went, Uh, Down?

This White House is the self-declared most pro-union White House ever. It features a “White House Task Force on Worker Organizing and Empowerment”…