President-elect Biden has proposed legislation costing $1.9 trillion, ostensibly to combat the coronavirus and the economic fallout of the pandemic. A starting point for evaluating the proposal is to consider the state of the economy. The chart, below, documents recent quarterly growth rates of gross domestic product (GDP).  As shown below, there are not yet data from the 4th quarter (Q4) of 2020. Instead, I provide a high and low estimate of likely growth. The high estimate (7.4 percent) is from the GDP Now tracking forecast of the Atlanta Federal Reserve Bank, while the low (2.5 percent) is the equivalent estimate from the New York Fed’s Nowcasting model. 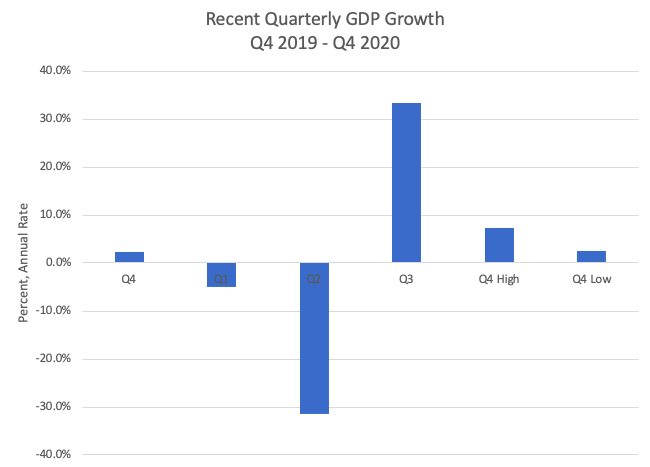 The chart carries two lessons. The first is that the economy is slowing – a muted mirror image of the first surge of cases in early 2020. This slowdown is also reflected in the loss of 140,000 jobs in December and the decline in December retail sales.

The second is that growth remains positive – the economy is far from recession territory and certainly not a disaster. Again, while the economy lost jobs in December, it was because hospitality and leisure lost 500,000 jobs; the rest of the sectors continued to grow. And while retail sales fell from November to December, they remain nearly 3 percent above December 2019. There is underlying strength masked by the fallout from virus-exposed activities such as going out to bars, restaurants, etc.

Looking forward, the lesson is that controlling and eliminating the virus is the only route to rapid, sustained, economy-wide growth. Policies that hasten this development should be a priority. In addition, Congress recently passed $900 billion in support of the economy. This constitutes roughly 4 percent of GDP. If the funds for checks, unemployment insurance (UI), Paycheck Protection Program, and other funds move into the economy over the next 6 months, this is support at an annual rate of 8 percent.

If recent history is any guide, much of these funds will be saved. Over the course of 2020, the saving rate skyrocketed from roughly 7.5 percent to nearly 35 percent in the aftermath of the CARES Act and remained nearly twice that through November. 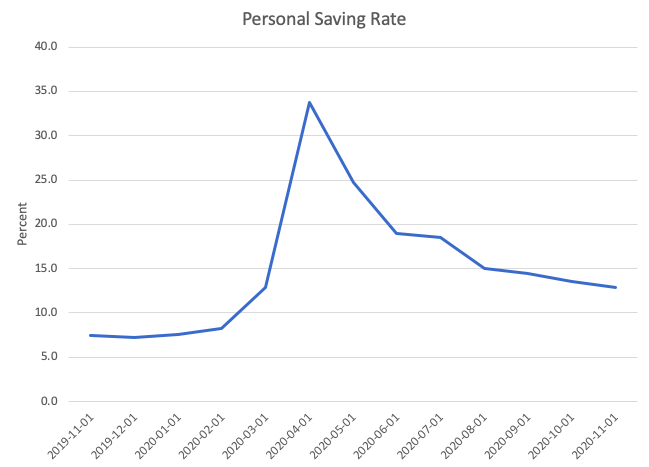 The bottom line? The economy has underlying strength, and a lot of fiscal support remains in the pipeline. If the virus vanished overnight, there would be no case for further action.

Let us turn, now, to the Biden proposal. The first thing to note is that $1.9 trillion is completely out of proportion to the economic problem. Using the growth rates (above), GDP was roughly $100 billion to $150 billion below its 2019 level in the 4th quarter. 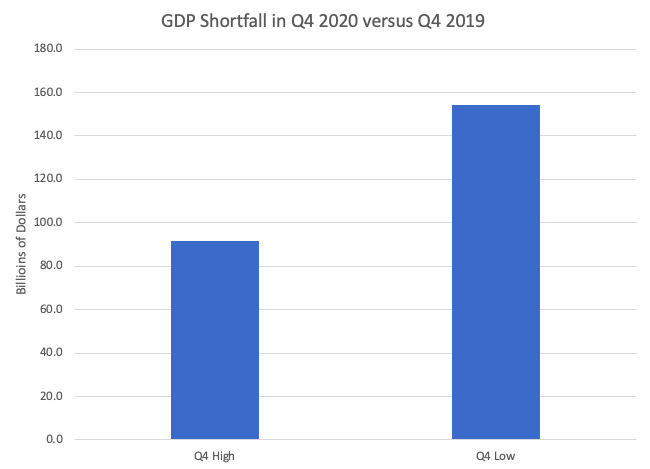 The second key aspect of the proposal is that content has an internal contradiction. In broad terms, there are $400 billion for provisions to fight the coronavirus with more vaccines and testing, more than $1 trillion for households, and $440 billion for aid to communities and businesses. If the plans to fight the virus are successful, however, there will be no need for special monies to open schools, open child daycares, provide paid leave, support businesses, or stimulate household spending. Only if the vaccination plan is expected to fail does it make sense to provide large-scale support for the economy through the summer and into the fall. The sensible strategy is to robustly fund the Biden vaccination plan, check for success, and continue to take the pulse of the economy.

The third key feature is that some of the economics are very weak (at best). It makes no sense to increase to $400 the supplemental UI benefit. Setting the benefit at $300 was a tough compromise; there is the potential for great damage in raising it. Similarly, there is no rationale for extending the UI to the end of September (especially if one expects the labor market to be essentially unimpaired by the virus during the summer).

In a similar fashion, the $600 checks provided in December will provide no real stimulus; raising them to $2,000 doubles down on a failed policy. If the checks are, instead, viewed as relief for those facing financial travail they need to be targeted on the long-term unemployed.

The final thing to note is that some of the proposals have nothing to do with either COVID-19 or temporary support for the economy. Raising the minimum wage to $15 an hour will only harm the small businesses that are already struggling. Expanding the child tax credit, childcare tax credit, earned income tax credit, and premium tax credit are issues for permanent tax policy.

The bottom line is that the Biden proposal is inconsistent with the current and projected strength of the economy, ignores economic support that is in the pipeline, spends over a trillion on problems that the vaccination program is intended to solve, and contains numerous extraneous proposals. Any legislative compromise that will pass Congress will have to be much better designed.