That growth is pretty good, continues the uninterrupted acceleration of year-over-year growth since the low of 1.3 percent in the second quarter of 2016, and should quiet the silly chatter of a 2019 recession. But economists exist to find the dark cloud for any silver lining, so let’s look a little closer.

The first thing that jumps out of the data is that inventory accumulation contributed 0.65 percentage points of the 3.2 percent total. Rapidly rising inventories are usually reversed in short order; one would expect inventories to subtract from growth moving forward. It makes sense to focus on the growth of GDP minus inventory changes – production for final sales only, instead of production for final sales and additional inventories. That growth was 2.6 percent in the first quarter.

The second thing that jumps out of the data is weak household spending – labelled personal consumption expenditures (PCE) in the data. PCE grew at an annual rate of only 1.2 percent, dragged down by a decline in purchases of durable goods at an annual rate of 5.3 percent. This is weird, because PCE has been a solidly growing component of GDP for years, unemployment is very low, wages are rising, and there is no readily identifiable problem with household balance sheets. PCE should simply keep growing.

The weirdness may be due to the government shutdown, a downward blip in consumer confidence in January, bad weather, or some other anomaly. But it makes the data harder to reconcile with recent trends. As a result, I was curious about where the growth was coming from. To investigate this, I added together the contributions of PCE and fixed investment and divided by growth of final sales to get the percentage of final sales growth from those two categories. I then repeated the exercise for net exports (exports minus imports) and government (federal plus state and local).

The result is displayed in the chart below. In 2016, 2017, and 2018 the dominant source of growth was households and businesses, which had contributed more than 100 percent of growth on average (the blue bars). In contrast, governments contributed a small share (green bars) and net exports (red bars) actually subtracted from overall growth on average. 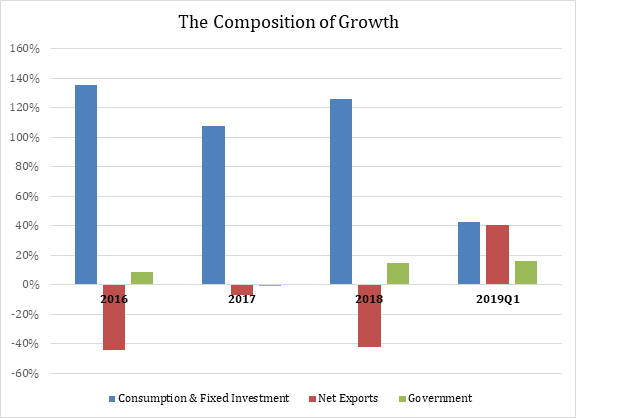 An economy the size of the United States’ does not reinvent itself overnight, so this shift is just weird. But that happens with any single quarter or month of economic data, so I look forward to seeing what the second quarter will bring and the overall trends produced in the first half of 2019.

Since January 1, the federal government has published $13.7 billion in net costs and 25 million hours of net paperwork burden increases.

Eakinomics: Biden’s Boring Blueprint The presidential campaign kicked off in earnest this weekend, with bookend speeches on July 4 by President…

Eakinomics: The Green New Deal Meets the Swamp When Representative Ocasio-Cortez’s Green New Deal was greeted with howls of protest over its massive…