According to Senator Hoeven and his sources, President Obama will veto the Keystone XL pipeline during the August recess. We’ve surpassed 2,504 days since TransCanada first submitted its petition to build the pipeline in September of 2008. Since then, AAF found that the U.S. has left $175 billion in economic activity on the table by not acting. Bloomberg reports that TransCanada will now pursue other pipelines through Canada to send their oil to the Atlantic.

Congress is moving towards passing a three month extension of the Highway Trust Fund ahead of the August recess. Congress must pass an extension by tomorrow or potentially disrupt project funding across the country. According to Reuters “The lifeline until Oct. 29 is expected to pass the House on Wednesday followed by quick action in the Senate.”

IRAN POLL: 52 percent of those surveyed in a new CNN/ORC poll say that Congress should reject the administration’s Iran deal. That includes 55 percent of independents who disagree on the deal. CNN has more on the survey here.

Yesterday the Centers for Medicare and Medicaid Services (CMS) released its latest edition of National Health Expenditures (NHE), a comprehensive summary and projection of sources and uses of dollars involved in the health sector. From a macro perspective, the most important issue is the pace of growth in total health spending, especially compared to the growth of Gross Domestic Product (GDP). The difference between NHE growth and GDP growth is called “excess cost growth” and measures the gap between the demand for additional spending and the income available to finance it.

The history and new projections of excess cost growth are shown in the chart below.  (The bar for 1990 measures the average over the five years ending in 1990, and similarly for 1995, 2000, 2005, and 2010. The remainder are either actual data or CMS projections.) A couple of observations jump out. First, the administration has pointed to the low (or negative) excess cost growth after the passage of the Affordable Care Act and tried to argue that Obamacare was able to “bend the cost curve.” Not so fast. First, even one of its architects, former White House adviser Zeke Emmanuel, has admitted that it failed on this front. Moreover, the same thing happened in the five years leading up to 2000, only  to quickly reverse course. 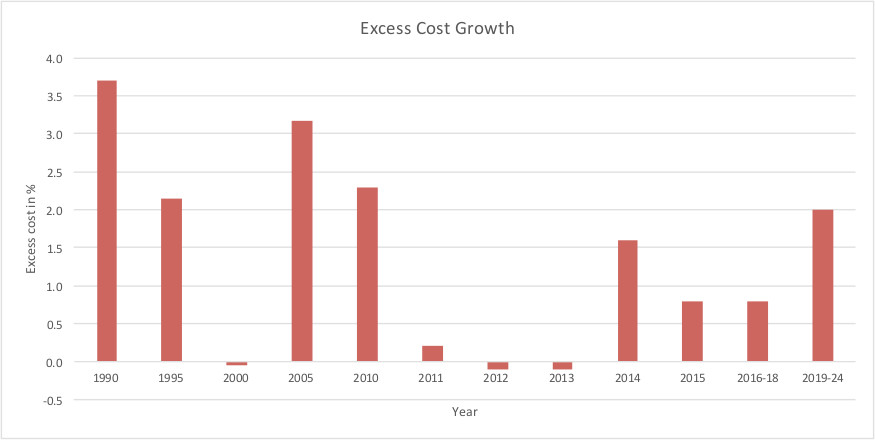 Second, the average excess cost growth over the period up to 2010 is 2.0 percent. That is exactly what CMS is projecting over the long term (2019-24).

Third, that is bad news, because excess cost growth is how the health sector grew to be such a large sector the economy and a threat to budgets at the federal, state and local levels. NHE growth was 5.5 percent in 2014. This is a large increase from 3.6 percent in 2013 and as a result is the first year spending will surpass $3 trillion. With projected growth rates at 5.3 percent or higher, CMS expects NHE to grow to 20 percent of GDP by 2024.

89 percent of all Export-Import Bank authorizations in 2014 were made to small businesses.

The Federal Trade Commission (FTC) is seemingly in the news nonstop these days. In the whirlwind of news stories it is often difficult to identify those…

Eakinomics has long believed that most of California public policy is designed to build a better Utah. That certainly looks to be the case for the Fast…

The coronavirus has created a certain brain fog among politicians. Not that kind of brain fog. This is more of a viral attack on vocabulary. The most…