Eakinomics: Poverty and Income in 2018

Yesterday the Census Bureau released its annual Income and Poverty in the United States report, this time releasing new data for 2018. AAF’s Isabel Soto has a nice review of the findings. As she notes, “The economic welfare of the population is, of course, of interest in and of itself. But 2018 was also the year that macroeconomic growth dramatically accelerated. Accordingly, this release acts in part as a report card for the Trump Administration’s performance over the past year and how its policies are affecting income and rates of poverty – fairly fundamental metrics for a healthy economy.”

So, what are the grades? From a labor-market perspective, quite good. Real earnings rose 3.4 percent overall, with men and women rising by 3.4 and 3.3 percent, respectively. At the same time, there were 2.3 million more full-time, year-round workers in 2018 than in 2017, of which 1.6 million were women. Finally, the poverty rate fell a full 0.5 percentage points, reaching 11.8 percent. Poverty has finally receded to the levels experienced before the Great Recession.

Still, some of the results were not as clear-cut and strong. The median household income rose from $62,626 to $63,179 (in 2018 dollars). This change was not, however, statistically significant; i.e., it could have just been due to randomness in the sample. This result is a bit funky (technical income distribution term), because the median incomes of both family households and non-family households rose in a statistically significant fashion – 1.2 and 2.4 percent, respectively.

Finally, the Census Bureau has a slew of measures of income inequality. On the whole these did not change much, but bounced up, down, and sideways in ways that painted no particular picture.

For me, an interesting aspect of the income distribution is in my favorite table – Appendix Table A-2 is always great. It shows the distribution of households across income classes (where income is measured in inflation-adjusted 2018 dollars). A condensed version of the table’s findings is displayed below.

Now it gets interesting. The next (blue) line is the fraction of households under $35,000 – the (arbitrarily classified) lower class. It fell from 36.4 to 27.9 percent. So the shrinking middle class was not falling into the bottom of the income distribution. Instead, the rolls of the upper class (green line) swelled from 9.7 percent to 30.4 percent.

Perhaps, just perhaps, a little less handwringing over the fate of the middle class is in order? 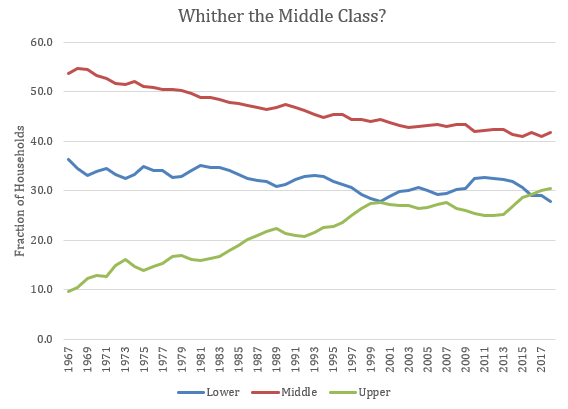 The Economics of Pandemics

Eakinomics: The Economics of Pandemics The outbreak of the coronavirus in China and the incidence of a U.S.-based case is eerily reminiscent of the…

AI Regulation and the Administration

Eakinomics: AI Regulation and the Administration  The buzzword “Artificial Intelligence” (AI) has been tossed around a lot, often in the context…

Phase 1 and the End of Global Trade

Eakinomics: Phase 1 and the End of Global Trade AAF’s Jacqueline Varas has a nice summary of the provisions in the so-called “Phase 1” trade deal…