The Affordable Care Act (ACA) is now in its seventh year and is increasingly stable. As detailed by AAF’s Jonathan Keisling and Andrew Strohman, the 2020 premium changes for benchmark plans offered in 2019 and again on the exchanges this year – that is, an apples-to-apples-comparison – showed an average increase of less than 1 percent. This is the lowest since the inception of the marketplaces. Moreover the average 2020 benchmark plan premium is 3 percent lower than in 2019.

This is the second straight year that the national average premium increase clocked in under the general rate of inflation. This is also the second straight year of relative stability in the exchange population and policy environment. From the outset insurers struggled to predict risk pools, as the young and healthy individuals failed to enroll at the expected levels. Now the marketplaces have stabilized at about 10 million beneficiaries, with a relatively predictable risk profile. Moreover, there are no looming further policy changes like the loss of cost-sharing reduction (CSR) funds or elimination of the mandate penalty.

Stability showed up in other ways as well, as 25 percent of all rating areas have the same benchmark plan as 2019 – an increase from last year. The exchanges have matured.

While the average, national outlook is relatively benign, it masks a lot of variation. The figure below shows the percent change in benchmark premiums by rating area; this is genuinely a case when the picture is worth a thousand words. 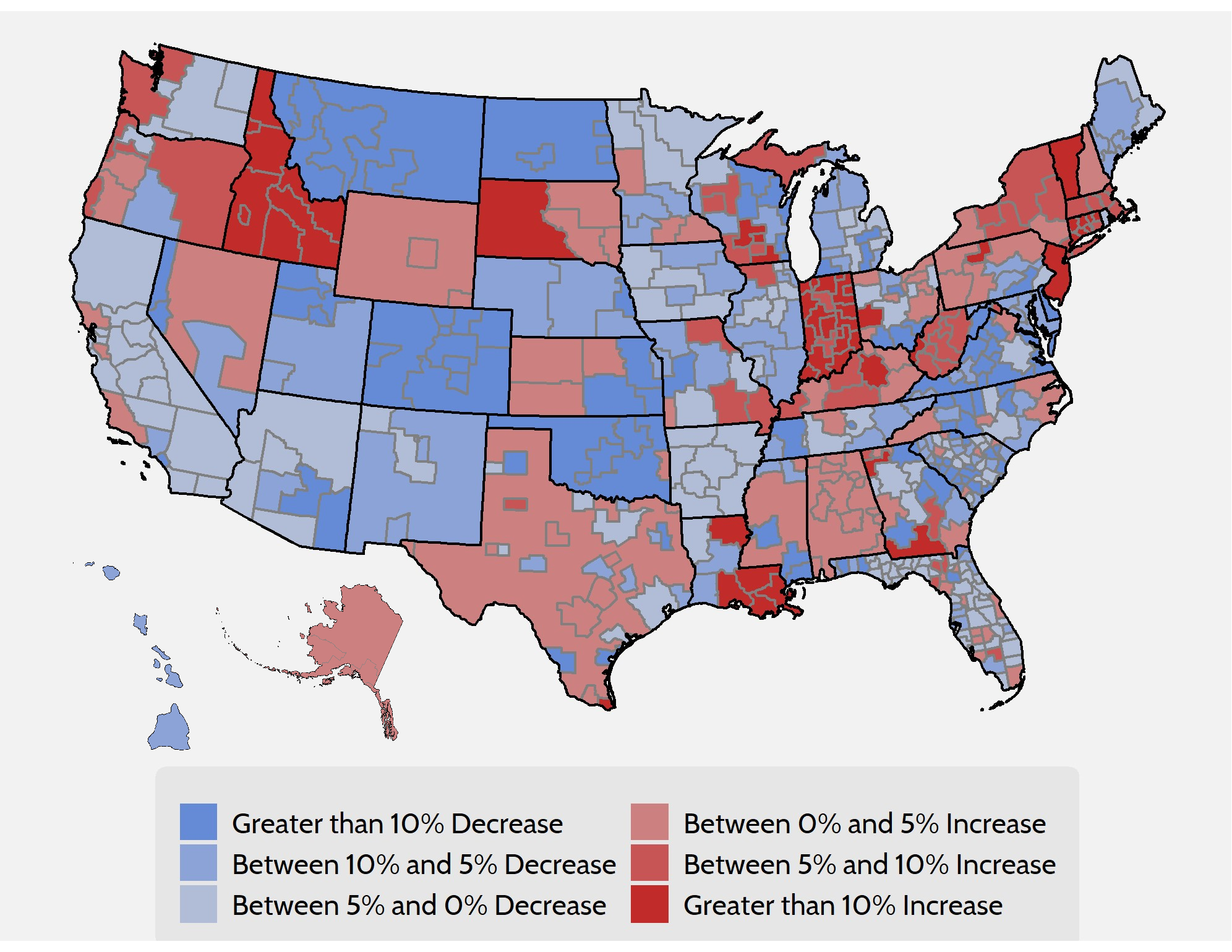 Obviously, changes larger than 10 percent will get some attention, as will declines of a comparable magnitude. But a lot of the map is pale blue or pale red.

Finally, an important development over the past two years has been the revitalization of competition. In the ACA exchange’s first year of open enrollment, research showed that a lack of competition was correlated with higher premiums and $1.7 billion in higher subsidy spending. As Keisling and Strohman note, “For the 2019 plan year, 100 rating areas saw at least one new firm enter the marketplace. This trend has continued for the 2020 plan year, as 154 rating areas will see the entrance of at least one more firm. Furthermore, the number of rating areas with more than one firm in 2020 is increasing by 61 to 418.”

The drama may have gone out of the announcement of ACA premiums, but the lack of drama is good news for the functioning of the exchanges.

The Congressional Budget Office estimated that the president’s tariffs thus far will reduce the growth of U.S. gross domestic product by 0.1 percent each year for the next 3 years.