Soybeans lie at the center of recent policy discussions in the United States. Recall that President Trump announced his intention to impose tariffs on China in April 2018. China immediately announced a commensurate retaliation against the United States – especially tariffs on U.S. exports of soybeans to China. The tariffs were imposed in August 2018, with China immediately responding. (Complete details are in Jackie Varas’s Eye on Trade.)

Now, the naïve vision of the fallout is one of soybeans rotting in U.S. fields as the China market is eliminated, but it’s a little more subtle than that. Indeed, as shown in the chart below, U.S. soybean production continued to rise in 2018, and the partial-year 2019 number is equivalent to a full year in excess of 4.5 billion bushels. In short, production continues apace. Who is buying the soybeans? 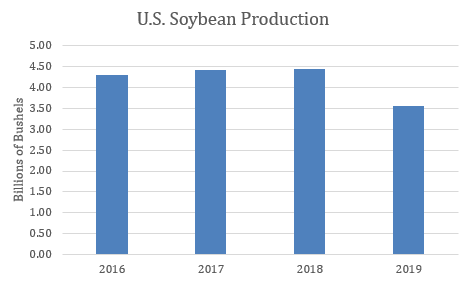 The chart below shows the pattern of soybean export sales over the past several years. Beginning in the January-October 2017 period, one can see that China is the dominant export market, is responsible for over one-half (53.7 percent) of all export sales, and vastly exceeds any other single country as a market for U.S. soybeans. One year later, during the same time period, exports are barely one-third of the previous year’s sales and responsible for just under a quarter (22.0 percent) of total soybean export sales. Notice, however, that sales to the European Union (the second largest market) nearly double in percent terms (8.6 percent to 16.3 percent) and other markets rise as well. This pattern continues for the period from October 2018 to August 2019; China diminishes as an export market, while other markets rise in importance.

This result is utterly unsurprising. In a theoretical, frictionless world, the diminished purchases of U.S. soybeans would be offset in China by purchases from other producers (e.g., Brazil). And for other countries, the loss of supply when soybeans are sent to China would be offset by buying from a new source: the United States. In short, the existence of the tariffs does not stop soybean production, consumption and trade, but it does divert trade and restructure the patterns of exports and imports.

Alas, this is not a frictionless world (although each day I find it more unreal). So, what was the fallout? Since new purchasers cannot be found overnight, the initial impact is a rise in the inventories of soybeans. And the real fallout is that in order to move those soybeans to new buyers on international markets, the price of soybeans had to fall. As seen in the chart below, prices received by U.S. soybean producers are down roughly 10 percent since the imposition of tariffs – a loss of roughly $4 billion. These kinds of losses prompted the Trump Administration to give farmers $12 billion in trade relief in 2018, and another $16 billion in 2019. 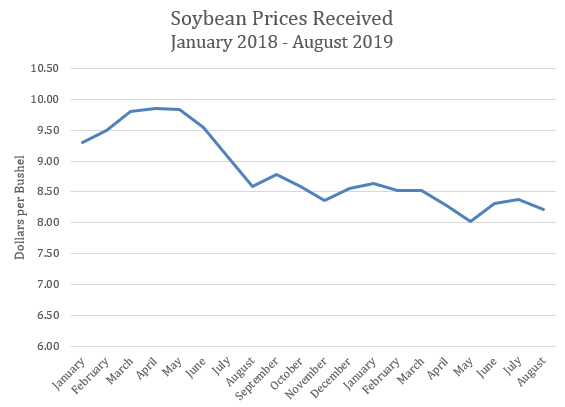 What happens next? If the United States and China agree to the so-called “phase 1” trade deal, China will go back to its previous levels of soybean purchase from the United States, and the entire episode will be run in reverse. And that will be called progress.