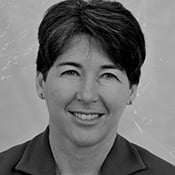 Michele Davis is a Partner at the Brunswick Group, a global corporate communications advisory firm.  She has broad experience in formulating and communicating economic policy, having worked in the Administration of George W. Bush and in the Congressional leadership.

Michele served as Assistant Secretary for Public Affairs and Director of Policy Planning at the Department of the Treasury from 2006 through January 20, 2009.   She was a senior member of the Treasury team addressing the financial crisis.  Prior to Treasury, Michele served as Deputy Assistant to the President and Deputy National Security Advisor for Communications at the White House.  Before joining the White House, Michele was Senior Vice President for Regulatory Policy at Fannie Mae, and she served at the Treasury Department as Assistant Secretary for Public Affairs in 2001-2002.   Earlier in her career, Michele was Communications Director for House Majority Leader Dick Armey, and spent six years advising the Congressional leadership on communications strategy for the House agenda.  She began her free-market advocacy work at Citizens for a Sound Economy, where she worked from 1991-94.  She earned a B.S. in Foreign Service at Georgetown University and an M.A. in economics at American University.   She and her family live in Arlington, Virginia.

Why Corporate Tax Reform is a Must

President Obama embarked on a nationwide tour to declare his intent to “win the future” for American workers.  He should embrace corporate tax reform…

Trade Agreements: A Jobs Bill That Doesn’t Add to the Deficit

We are suffering through the worst recession in 75 years and it has cost our nation more than 8 million jobs. Politicians are talking about all kinds of…