The Renewable Fuel Standards (RFS) program was created under the Energy Policy Act (EPAct) of 2005, and established the first renewable fuel volume mandate in the United States. The EPA is expected to finalize its revised RFS regulations by November 30th, and if history is any indicator, that deadline may come and go without clear guidance.

As shown in the bullets below, the EPA has been late every year in finalizing RFS standards and not by a just few days. At a Senate hearing last week, Janet McCabe, Acting Assistant Administrator for the Office of Air and Radiation said delays on major regulations like this create “uncertainty in the marketplace”.

•      2014: Final rule for RFS 72 weeks and counting; companies still don’t know what the EPA mandate was for last year’s production  and are on the line for any penalties incurred if they fail to meet these mandates.

At the same hearing, McCabe claimed the EPA is on course to deliver the final ruling on time, but the clock is ticking.

Last month, the EPA released its revised proposal that featured RFS levels for 2014, 2015 and 2016. As seen in the chart below, the estimates for ethanol were greater than the original 2013 estimates, but were still far below the original RFS level. The overall total renewable fuels slipped from the final 2013 numbers with the intent for a slight increase in 2016 which is just out of reach of the final 2013 numbers. These numbers are indicative of an EPA push past the E10 blend wall, which is fuel with up to 10 percent ethanol[1]. 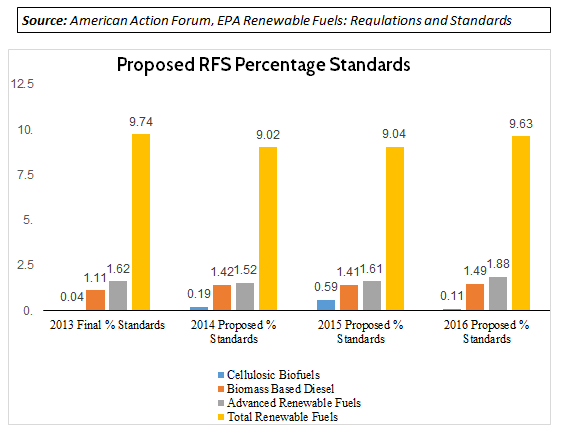 Under the RFS, the EPA’s Renewable Volume Obligation requires ethanol blending into gasoline at comparable historic levels, hitting 13.25 billion gallons for 2014. It would also require 13.4 billion gallons of ethanol to be blended in 2015 and would set ethanol blending at 14.00 billion gallons for 2016. These levels have opposing sides sparring, especially those in the oil and ethanol industry. Ethanol advocates have been up in arms over the EPA’s pending proposal to significantly reduce the 2014 volume for biofuel blending and oil advocates are citing the RFS’s blend wall as an unattainable feat.

It is important to evaluate how these mandates are written.  Cellulosic ethanol, intended to comprise 44 percent of the RFS by 2022, did not meet the mandate of 1 billion gallons last year, instead only 817,000 gallons were produced. The discrepancy between these numbers is vast and speaks volumes about the unrealistic expectations that were originally set.  It gets even more complicated when one of the largest producers of cellulosic ethanol went bankrupt[iii] last year because they couldn’t hit the target, or come anywhere close due to a lag in technology.[iv]

At a hearing last week before the Senate Subcommittee on Regulatory Affairs and Federal Management, the Senate committee focused on shifting RFS policy. Members of the Committee lambasted EPA officials including McCabe, over the EPA’s untimely and inadequate handling of RFS which included the artificial push for ethanol into the fuel base.

At the hearing, McCabe was asked if she saw the amount of renewable fuels blended into the fuel supply increasing beyond 2016. She responded by saying that, “I do see it continuing to go up, before RFS there was very little of this fuel in the market and now there is much more and we see growth.” She noted this regulation is calling for a significant transformation in the way fuel is provided and at these volumes they will continue to encourage and promote those changes.

The EPAct sets out circumstances under which the EPA will consider a reset of the standards. This is a significant undertaking as it incurs a multiple year change.  2016 marks the first time a reset would be allowed and McCabe acknowledged that the EPA is considering a blanket reset for all categories. Given the EPA’s track record with RFS timelines, an ambitious reset may result in a final regulation that isn’t published until the beginning of a new administration which could significantly alter the course.

In order for RFS to be effective, implementing rules on schedule is of critical importance.  Active congressional oversight of EPA can help ensure agency accountability, and promote realistic regulatory goals for the energy market.

The One Trillion Trees Initiative

Executive Summary President Trump last week issued an executive order that creates a council to implement the One Trillion Trees Initiative. The…

At the beginning of October, the American Action Forum (AAF) repeated state-level polling in an effort to gauge the solid and shifting opinions of the…

Methodology On October 3-5, 2020, Basswood Research conducted a survey of likely general election voters in Arizona for the American Action Forum. …