As part of the #Eakinomics video series, the American Action Forum (@AAF) today released a new video that explains why U.S. companies decide to move their headquarters overseas after a merger. In the #Eakinomics video, AAF President Douglas Holtz-Eakin explains what a tax inversion is, the reasons driving companies to move their headquarters, and what can be done to stop inversions. 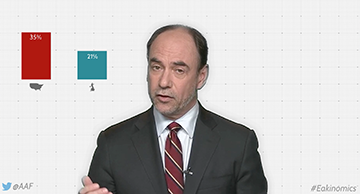 Click here to view the video
“The U.S. corporation income tax is higher than the United Kingdom and it taxes more economic activity, putting the U.S. firm at an immediate disadvantage. When those companies decide to merge for good solid business reasons, they start running the numbers and decide it’s a better deal to be in the United Kingdom. What does this mean? Well, number one, it means we lose the headquarters. But, worse, any firm that remains in the United States is at an automatic tax disadvantage against these overseas rivals. What happens then? Products get lost. Sales get lost. Factories get lost. And the factories and the jobs end up being shipped overseas to our competitor companies,” says Holtz-Eakin in the video.

While executive branch agencies perform a regulatory impact analysis when they propose and finalize rules, too often similar analysis fails to take place…

Recent congressional efforts have sought to provide regulatory guardrails to the nascent cryptocurrency industry; for the most part these efforts have…