The Department of Energy (DOE) had a big year imposing efficiency regulations in 2014. It looks like the trend will continue in 2015. DOE recently released the final versions of two energy efficiency proposals that it proposed in 2014. The affected items include commercial icemakers and certain kinds of lamps used in commercial and industrial settings. The unofficial, pre-publication versions of these rules are a combined 776 pages.

While the actual increase in overall costs from the proposed to final versions is relatively modest, the context of these rules is noteworthy. The American Action Forum (AAF) recently looked back at 2014, the president’s “Year of Action.” One of the key trends last year was the prominence of both EPA and DOE rulemaking burdens. That trend looks as though it will continue into 2015.

During the end of 2014, EPA released its long-awaited coal ash rule. The total cost came in at more than $23 billion, a sum that could have pushed 2014’s overall regulatory tally past $200 billion. However, the coal ash rule still awaits final publication in the Federal Register (FR). As such, it would officially be a 2015 rule. Combining the coal ash rule, these two DOE regulations, and the $269 million in last week’s final rule burdens yields a total cost figure of more than $37.3 billion. This would be a significant chunk of any year’s overall total. But, assuming the three outstanding rules find their way to the FR by January 31st, 2015, it would make for the most expensive January in recent years. 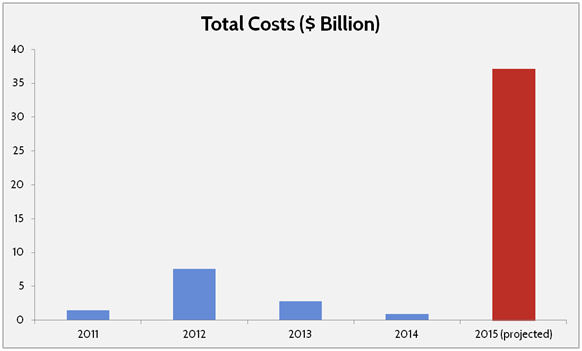 As with most efficiency standards, some part of the costs will be passed on to consumers via higher purchase prices. Determining an exact, industry-wide price increase for either of these rules is problematic as each affects various product categories. For instance, there are some lamp categories that will not undergo an increase from their baseline. However, lamps that could have a price increase will, on average, see costs essentially double, with a typical $4 to $6 lamp jumping to between roughly $8.50 and $12.

The ubiquity of affected items – particularly for lamps – means that this rule has broadly dispersed consumer impacts. However, on the producer end, the manufacturers of these items are concentrated in particular states. The table below shows the states most affected by these rules.

In terms of further DOE analysis, both measures trigger the Unfunded Mandates Reform Act (UMRA) and contain extensive Regulatory Flexibility Act (RFA) analyses. The icemaker rule’s UMRA analysis is interesting because its annualized costs do not exceed UMRA’s usual threshold of $100 million adjusted for inflation. However, DOE apparently takes long-term costs and consumer impacts into account, as it explains here:

DOE has concluded that this final rule would likely require expenditures of $100 million or more on the private sector. Such expenditures may include: (1) investment in research and development and in capital expenditures by automatic commercial ice maker manufacturers in the years between the final rule and the compliance date for the new standards, and (2) incremental additional expenditures by consumers to purchase higher-efficiency automatic commercial ice maker, starting at the compliance date for the applicable standard.

In each of the RFA analyses, DOE finds that while there are limited numbers of small businesses in either industry, the impacts are significant. For small icemaker manufacturers, industry net present value could drop by roughly 50 percent. For small lamp manufacturers, production conversion costs equal roughly one-fifth of annual revenue. There are employment implications as well: “Domestic employment impacts would be seen in small business’ sales forces and warehouse staff that could be potentially downsized as a result of the GSFL standards established in today’s final rule.”

This pair of rulemakings follows in the footsteps of 2014’s brisk pace of DOE efficiency rules. It may put the remainder of 2015 on a rapid regulatory pace with this January hopping out to a total cost figure that’s exponentially higher than previous starts to the new year. It’s still early in the year, but with the final versions of other energy and environmental regulations looming on the schedule, the “Year of Action” is far from finished.