Globalized Risk: The Role of Global Insurers and Their Regulatory Implications

With American headlines rife with financial news from China, Greece and other countries halfway around the world, there is no doubt that the globalized economy is propagating risks more than ever. For many, globalization brings great fear and uncertainty – the fact that international market forces affect financial stability is worrisome in and of itself. But in the insurance world, global insurers actually have an advantage. Though globalization increases interconnected risks, it allows global insurers to operate under the law of large numbers and mitigate those risks by creating expansive portfolios of diversified risks across the globe.

At the same time, as global insurers serve clients in hundreds of international jurisdictions, they are forced to operate under hundreds of regulatory environments. This fragmented regulatory regime raises costs, adds complexity, and otherwise limits market expansion for insurance groups trying to meet cross-border needs. Such hindrances reduce foreign direct investment (FDI), trade and growth in the global economy – the effects of which are particularly detrimental to emerging markets and international growth opportunities for American businesses. However, the benefit is that as local regulations have developed over the course of many years, countries and local entities are better enabled to tailor insurance requirements to the desires of their individual populations.

For insurance regulation to be truly effective, regulators must take into account the reality of globalization before considering the need to efficiently disperse capital, diversify risks, and curtail costs. If global insurers are able to operate under more a more efficient and appropriately-tailored regulatory regime, they will be better equipped to carry out their role in the international economy: providing companies of all sizes in all parts of the world with customized protection from interconnected risks.

The push to harmonize global insurance standards started in the aftermath of the financial crises when industry leaders called for insurance-specific solutions to the issues being discussed at the G20’s meeting on April 2 that year. Shortly thereafter, the G20 made global financial stability its top priority, determining that internationally active insurance groups (IAIGs) play an important role in achieving that stability. As a result, the Financial Stability Board (FSB) was formed and was charged with “monitor[ing] and assess[ing] vulnerabilities affecting the global financial system and propos[ing] actions needed to address them.” The FSB tasked the International Association of Insurance Supervisors (IAIS) with developing a global regulatory framework for IAIGs.

FSB and IAIS have proposed revised capital standards, methods for identifying risks to financial markets, and generally streamlined insurance regulation. These initiatives aim to achieve three goals: enhancing financial stability, providing more effective and efficient jurisdictional coordination, and establishing consistent best practices. Many of the initiatives are similar to domestic efforts created in Dodd-Frank, but are targeted specifically at global insurers, IAIGs, and global systemically important insurers (G-SIIs). Each of the initiatives is summarized in the table below. 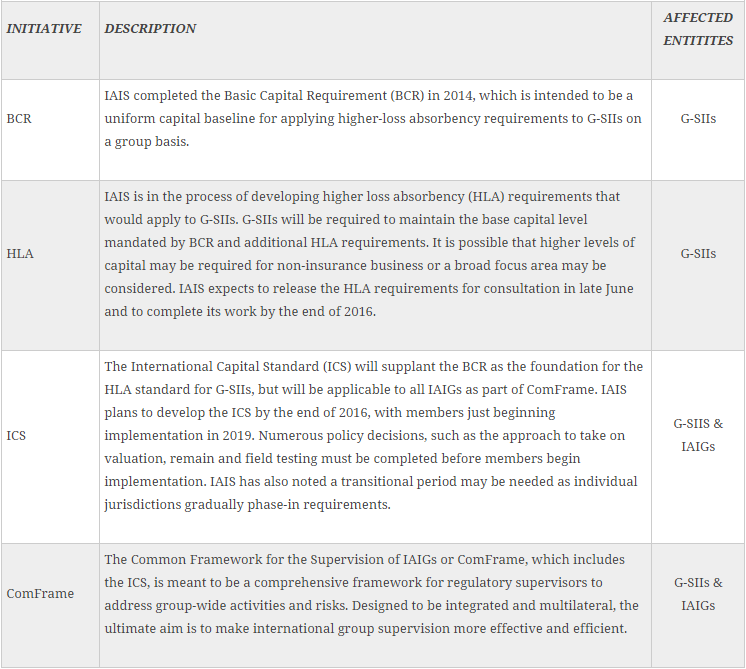 IAIGs are defined by their size and their global footprint. Insurance groups with written premiums in at least three jurisdictions and with more than $50 billion in assets are considered IAIGs. Currently, IAIS has recognized over 50 IAIGs, only a handful of which are American companies.

On the flip side, G-SIIs are defined by the systemic risk they pose. Nine companies have been identified as being sufficiently systemically risky to qualify as a G-SII. Three of those (AIG, Prudential, and MetLife) are American companies and have been simultaneously classified as systemically important financial institutions (SIFIs) by the Financial Stability Oversight Council (FSOC), a product of Dodd-Frank. The IAIS is expected to revise its G-SII assessment methodology by the end of this year, which could increase the number of insurance groups designated as systemically important.

While IAIS is responsible for setting and advocating for the standards discussed above, it is important to note that IAIS is just that: a standard-setting body. It has no legal authority to implement or enforce any standards in member jurisdictions. Each individual country must independently implement any final agreement under its own legal framework. In the United States, for example, without an act of Congress, state insurance commissioners are the only ones legally authorized to require insurance companies to follow IAIS standards. Even if IAIS ultimately proposes a comprehensive set of uniform standards that would regulate international insurers at the group level, these companies could continue to face fragmented regulation until those standards are adopted by each jurisdiction in which they serve.

The Role of Global Insurers

Global insurers face risks of their own when it comes to regulation: ineffective capital standards reduce insurers’ ability to diversify risk; redundant regulations raise costs of compliance and eventually raise customer costs; and regulations that fail to incentivize international engagement hinder insurance companies’ necessary role in foreign direct investment (FDI). The ability to operate efficiently helps global insurers play an increasingly vital role in the international economy. That role is vital because of the benefits it provides. Those can be broken out into four key areas: 1) The insurers’ larger and more diverse balance sheets, which create a better ability to distribute risk; 2) The ability to handle interconnected risks; 3) The ability to offer products specifically tailored to a particular market; and 4) Global insurers’ role in FDI.

Unlike banks, insurance companies, particularly global insurers, are driven by the law of large numbers in which diverse and unconnected risks are aggregated. Simply put, the larger the sample size, the more likely it is that actual losses reflect expected losses. Global insurers are best situated to take advantage of the law of large numbers due to their sheer ability to capture customers in markets that domestic insurers don’t have access to.

Natural disasters provide a good illustration of the benefits of global insurers’ size and diversity. Take, for example, Hurricane Andrew. In the aftermath of the 1992 hurricane in South Florida, more than 930,000 policyholders lost coverage after eleven insurance companies went bankrupt, as a result of those companies’ balance sheets being too heavily weighted towards property insurance in the storm zone. Each of those eleven companies was a domestic insurer. The global insurers that served the area were able to stay afloat because of the law of large numbers and their diversification of interests.

Not unlike the logic behind the law of large numbers is the idea that global insurers are most capable of mitigating globally-interconnected risks. A recent study by Bloomberg found that 89 percent of executive level decision makers and 91 percent of business risk managers believe that the global risk landscape will become more closely intertwined over the next several years. These interconnected risks are not always easy to predict. That’s where global insurers’ expansive reach comes in handy. Their ability to use a global network to not only have experts on the ground to assess the risk environment but also to help companies set up reinsurance captives creates the optimal breadth and depth of coverage to protect their clients’ business activities around the world.

To anyone paying attention, the 2010 volcanic eruption in Iceland didn’t come as much of a surprise. Nor did the airline industry’s $1 billion revenue hit, after months of ash spewing into one of the world’s busiest air spaces. What did catch the world off guard was the ripple effect on other industries. With thousands of flights grounded each day, companies shipping perishable goods around the world were unable to make deliveries on time and were left with inconsumable products and lost profits. Volcanic ash from Iceland affected food and flower companies as far away as Brazil and Japan. This is interconnected risk, and it was the insurers with a footprint in multiple jurisdictions affected by such world events that were able to keep a bad situation from getting much worse.

Having “boots on the ground” in the communities they insure gives global insurers the ability to gain an intrinsic familiarity with specific markets. Insurance is a tedious business that requires products specific to the businesses they insure. Oftentimes local insurers in high-risk areas aren’t equipped to offer coverage for certain political or supply chain risks. Global insurers have the double advantage of not only offering those types of products but also being able to have agents assess the exact needs of the customer within a particular community. Sometimes referred to as “sleep easy coverage,” global insurers are able to provide coverage even after limits on a local policy have been exhausted. The advantages that come from a macro company taking a micro focus of its clientele enable FDI, which helps to facilitate trade and market expansion.

Foreign direct investment is a “category of cross-border investment made by a resident in one economy with the objective of establishing a lasting interest in an enterprise that is resident in an economy other than that of the direct investor.” FDI helps solve the age-old policymaker conundrum of wanting to protect the domestic economy from financial risks abroad, while encouraging foreign investment here at home in order to spur job creation and economic growth. FDI allows both goals to be achieved.

Global insurance helps to promote FDI by offering direct investors each of the advantages discussed above. Additionally, global insurers offer direct investors the opportunity to establish their own captive insurance in an effort to enhance risk diversification not only across jurisdictions but also across different types of policies – property/casualty, life, etc. A captive is an insurance company that is usually wholly-owned by the individual or company that it is insuring. Captives are formed to specifically manage and insure the owner’s business risks and may retain shares of the underwriting profits and, at times, pool or reinsure that corporate risk. This additional layer of risk mitigation provides direct investors with the protection they need to effectively develop their businesses abroad, and thereby jumpstart economic development and job creation.

It’s clear that global insurers play an important role in the global economy, and it’s becoming increasingly clear that there are a number of regulatory issues that must be overcome as IAIS moves forward with its recommendations. Although many of the initiatives are still years away from adoption, Congress has begun to take an interest in the policies affecting insurance companies both in the U.S. and overseas. Policymakers and regulators are in uncharted territory as globalization increases and the role of insurers in the global economy is growing right along with it. Perhaps the biggest looming question is not whether there will be a new regulatory structure, but which regime will make the rules. If the U.S. is first to create a set of regulatory standards, will the international community follow? Or vice versa? As long as industry works with regulators and regulators work with each other, we can be optimistic that the regulatory environment will be one in which insurers can continue to provide the global services that are so vital to the international economy.