There are currently 227,500 employees devoted to regulatory compliance. The labor costs alone for ensuring local governments and companies are compliant with regulation top $14.7 billion annually.

Once a regulation is published, private sector entities must determine if and how they are affected by it. With lengthy preambles and obscure legal language, this is not always an easy task. Many may feel the need to turn to outside counsel in order to navigate all the complex requirements.

There are particular costs and trade-offs associated with compliance. Relying on specific legal expertise on a regular basis can be expensive, especially for smaller firms that may be unable to hire a full-time legal staff and therefore have trouble learning what and how requirements apply to them. A large volume of rules can also lead firms to be primarily concerned with adhering to their requirements rather than with innovating, lest they run afoul of the regulations.

One way of responding to the complexity in determining regulatory responsibility is to employ expert staff specifically devoted to the task. These “compliance officers,” the title used by the Bureau of Labor Statistics, are not as expensive as lawyers, as they are paid a mean hourly wage of $31 instead of $63 for lawyers, but they can still do a great deal to inform companies about relevant regulatory requirements. Tracking compliance officer employment trends reveals how private industry perceives its regulatory responsibilities; it is also a unique measure of the cost of knowing how to comply, on top of the actual cost of compliance itself.

BLS describes the typical duties of a compliance officer as “examin[ing], evaluat[ing] and investigat[ing] eligibility for or conformity with laws and regulations.” Excluded from the category are specific types of inspectors and examiners, like building inspectors and tax collectors. A large number of compliance officers are employed by local, state and federal agencies in order to enforce regulations, but a growing number are found in the private sector. 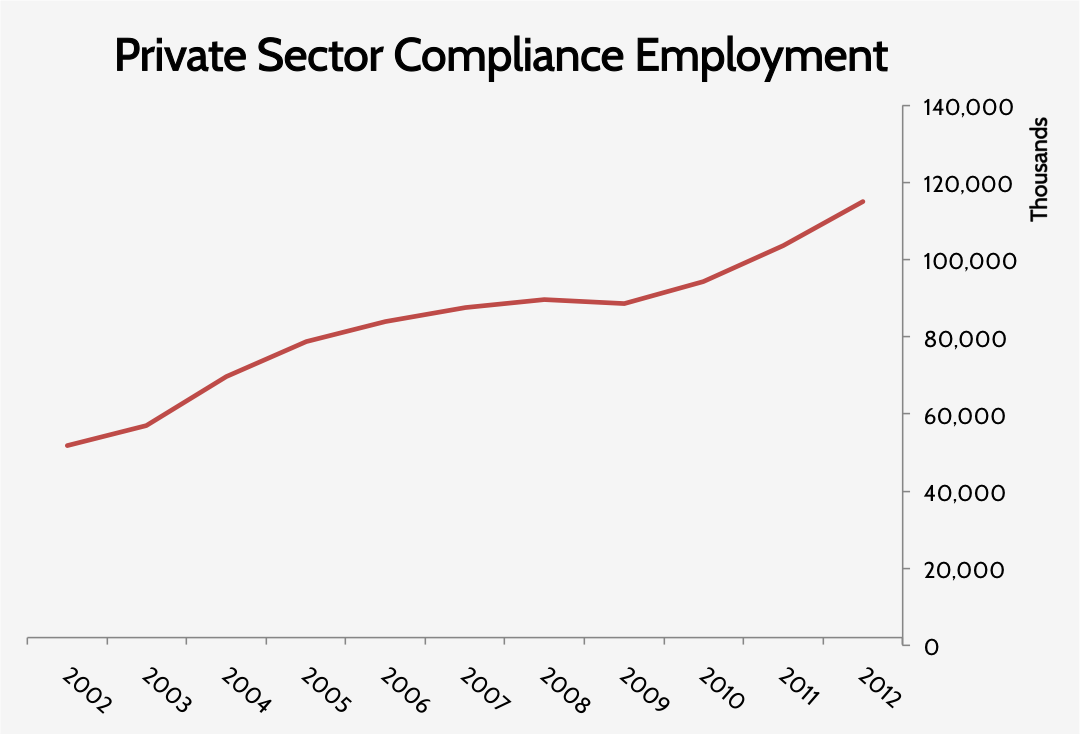 Private sector compliance officer employment grew from 51,690 in 2002 to 115,160 in 2012, an overall increase of 122.8 percent. Following 2009 there is a notable uptick in the rate of growth, suggesting that the occupation will continue to expand, particularly in face of such major regulatory programs as Dodd-Frank and the Affordable Care Act.

When the private sector employment is multiplied by the mean annual wage provided by the BLS ($64,960), the total cost of compliance officers to businesses is $7.48 billion. This money paid to compliance officers is not entirely harmful to the economy, as it does increase spending and provide jobs; however, it is inefficient. If firms were not concerned with their ability to comply with regulation, they could spend more on profitable investments to increase their actual output rather than pay compliance officers, which are primarily concerned with avoiding government penalties.

When a firm hires a compliance officer, it demonstrates that it is not just encountering regulations, but that it is encountering them frequently enough to justify a full-time employee. It also can indicate that the regulations in question are incomprehensible to non-experts. An unnecessarily complex regulation imposes burdens atop its actual provisions, as businesses must proceed cautiously until they can determine what is required of them. Growth in compliance officer employment may reflect increased uncertainty created by complicated rules, in addition to the cumulative compliance burden of a large volume of rules.

When the effect of the overall economic downturn from 2008 is removed, the growth is uninterrupted. In fact when compared to the overall employment growth between 2011 and 2012, 1.7 percent according to BLS, private sector compliance officer employment grew six times as rapidly as overall employment. The disparity is more pronounced over a slightly longer time horizon. Between its pre-recession peak in 2007 and May 2012, the economy lost 3 percent of its employment, while private sector compliance officer employment grew by 31.5 percent.

Compliance officers in the private sector may be effectively insulated from recessions due to the nature of their job. Regardless of how much a company is producing, provided that it avoids going out of business entirely, it will require the services of compliance officers to ensure that it is operating consistently with regulations. So while they are not as liable to be laid off as workers more directly connected with output, their presence may make it more difficult for firms to successfully reduce cost by reducing output. 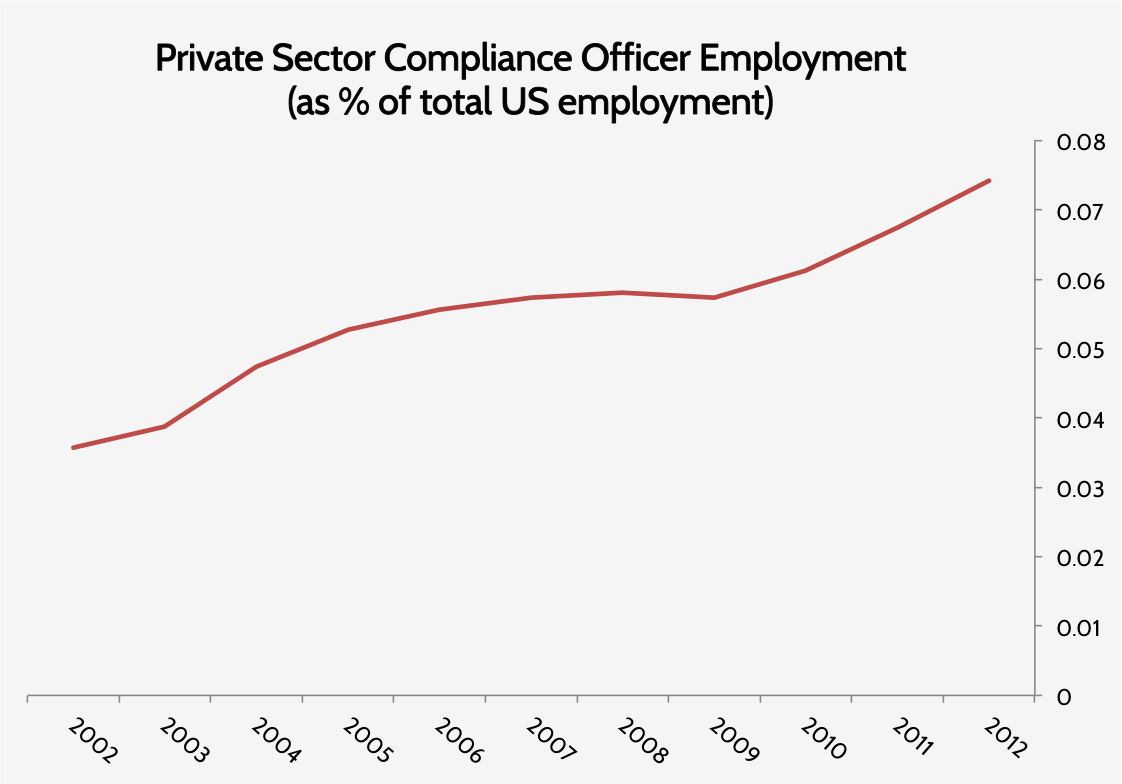 Even as marginal costs fall due to removing the least efficient resources engaged in production, average costs could remain high as firms with higher fixed costs are forced to spread their overhead over a smaller total output. In this manner, during a recession, an industry with a large number of compliance officers would be forced to reduce output, resulting in laying off more workers until variable costs fall sufficiently far enough to bring average costs in line with revenues.

Whether this explosive growth will continue depends on many factors, including major legislative moves by Congress and the success of current retrospective review efforts. BLS currently projects compliance officer employment to grow 15 percent from 2010 to 2020. As the projected growth for all jobs is 14.3 percent, it at first appears that compliance officer trends will revert to the mean, after growing 60.8 percent between 2000 and 2010.

Furthermore, the reliability of the future estimates themselves could be called into question. As stated, the overall level of compliance officer employment grew 60.8 percent from 2000 to 2010; the BLS projection for the same time period was growth of only 8.9 percent. There is reason to believe the estimate for 2010-2020 may be similarly understated: between 2010 and 2012 compliance officer employment grew 11.5 percent, already nearing the estimate of 15 percent for the full ten year time period. If that annual rate of growth continues, the number of compliance officers will increase 56 percent by 2020.

It therefore appears that compliance officer growth, particularly in the private sector, will continue to outpace the overall economy. A disconnect between compliance officer trends and the economy overall is unsurprising, as hiring decisions regarding compliance officers are made not on the basis of market conditions but in response to government action. 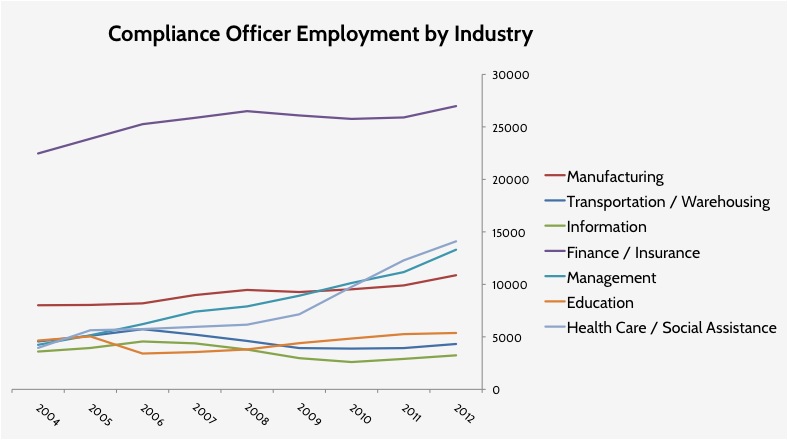 Finance is easily the largest private sector compliance officer employer, but growth in that industry has not been as dramatic as in many others. Because financial firms already possess substantial compliance staff, they may not have been driven to hire more despite the massive number of new rules related to Dodd-Frank. Their existing employees could redirect their efforts according to the changes made in the reform.

The industries of health care and management have grown most rapidly, and manufacturing has also seen a substantial increase in the last few years. Smaller areas of employment have been the most stable, but it is notable that health care and management were indistinguishable from these minor industries in 2004 and have since risen significantly in a short period. For health care, it is perhaps inaccurate to attribute the entire expansion to health care reform, as the industry began to separate from the others in 2007, but the growth did accelerate markedly in 2009 and 2010 as health care reform passed through Congress.

While businesses are able to take measures to minimize the burden of paperwork hours and regulatory compliance, the demands are ultimately unavoidable, and they are growing. It not only reflects the quantitative impact of paperwork hours in concrete terms, as more to do inevitably requires more hands, but it also provides insight into the complexity of regulatory tasks, as the specialized expertise of compliance officers will be most necessary when requirements are unclear or hard to navigate.

Compliance officers themselves are not a problem, as they help to manage paperwork more efficiently and reduce regulatory risk. They represent a market-oriented, cost-minimizing response to federal rules. The problem is that compliance officers are hired not because they can assist companies to innovate, produce more efficiently, or better serve their customers directly. Rather, they allow companies to continue to operate despite the strictures of federal regulation, making compliance officers both a symptom and an added cost to the nation’s complex regulatory regime.