The United States and Japan share an alliance that is integral to the national security of both countries. Japan and America also share a similar geopolitical advantage: they are both bordered by water. In Japan’s case, however, the water does not separate the country from its unfriendly neighbors by much—and new weapons technologies are bringing threats very close to the Japanese homeland.

The proliferation of increasingly longer-range ballistic missiles in the Asia-Pacific region poses a serious threat to both Japan and the United States. North Korea has a proven arsenal of hundreds of ballistic missiles. Many of these missiles are capable of reaching Japan and threaten American military bases there.

In response to this threat, the United States has invested heavily in ballistic missile defense (BMD) to protect U.S. forces and allies in the region. One strategy the U.S. government has used to pursue BMD programs is close defense technology cooperation with Japan. This includes joint research, co-development, and co-production of weapons systems.

In 1998, North Korea tested a long-range ballistic missile that flew over Japan and landed in the Pacific Ocean. Since then, North Korea has tested hundreds of short- to medium-range missiles in the direction of Japan. Estimates are that the country currently has around 100 ballistic missiles capable of hitting Japan.[1] The North Korean nuclear program presents an even more serious threat, as the country has demonstrated increasing technological sophistication in successive nuclear tests. North Korea claims to have miniaturization capability, which is necessary to mount nuclear warheads on missiles, though U.S. intelligence assessments have not confirmed this.[2]

China’s military buildup also raises serious security concerns in Japan, as the two countries have a long history of conflict. China disputes Japanese sovereignty over uninhabited but resource-rich islands in the East China Sea. Additionally, Chinese aggression in the South China Sea increases tension between the two countries and poses a risk of conflict in the region. Unlike North Korea, the Chinese military presents a more diverse threat to Japan, with significant land and sea defense assets to deploy in a potential conflict. However, it does have hundreds of ballistic missiles that would be capable of reaching Japan—as well as at least 250 nuclear warheads.[3]

U.S.-Japan missile defense cooperation dates back to the 1980s, when the countries began bilateral research on BMD technology. The official program for joint research and development of BMD systems began in the late 1990s, shortly after the first North Korean missile test over Japan. Since that time, the United States and Japan have deployed both sea- and ground-based missile defense programs: on the sea, Aegis-equipped destroyer ships with Standard Missile-3 (SM-3) interceptors, and on land, Patriot Advanced Capability-3 (PAC-3) surface-to-air interceptor batteries. SM-3 provides upper-tier interception capability, and PAC-3 provides the capability to intercept missiles in the lower-tier. Together, SM-3 and PAC-3 create a multi-tier (or “layered”) BMD system to intercept missiles at different phases of the flight trajectory. Functionally, the way the BMD system intercepts a missile is like “a bullet hitting a bullet.”[4]

This image shows how the BMD systems work to destroy incoming missiles. 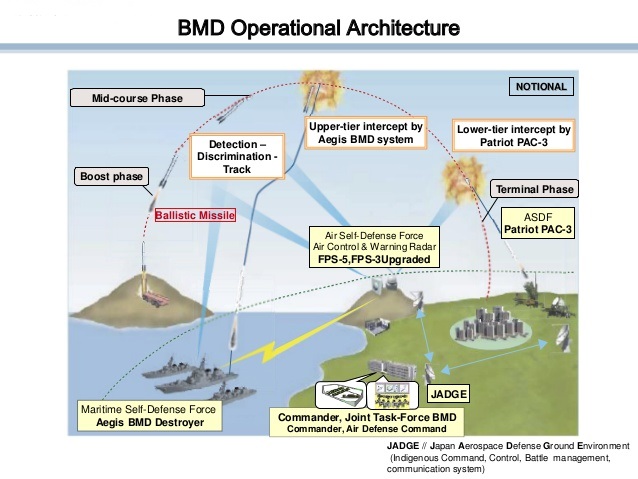 Japan has invested more in missile defense capability than any other country in Asia. It has four Aegis-equipped destroyers with SM-3 interceptors and plans to add four more. It also has 17 PAC-3 batteries dispersed to protect Tokyo and other key locations. These systems are linked with advanced radars and early warning sensors to detect missile threats. Japan is considering investing in a space-based early warning system in the future.[6]

The United States and Japan worked together closely to develop the BMD systems in the country. Just months after the 1998 North Korean missile test, the Japanese government approved a decision to cooperate with the United States on BMD. In 1999, the two countries signed a Memorandum of Understanding for joint research and development of BMD.[7] The first step was establishing a cooperative technical research program for BMD. This program was focused on developing a sea-based, upper-tier BMD system and involved joint design, prototype production, and testing.[8]

In 2003, the Japanese government made the decision to acquire BMD capabilities. At the same time, the government continued the U.S.-Japan joint technological research project for the purpose of developing improved capabilities in the future for the systems it procured.[9] The United States began deploying BMD assets to U.S. military bases in Japan in 2006, following the first North Korean nuclear test. In 2009, prior to a launch North Korea claimed was a “satellite,” Japan deployed the first of its own BMD assets, both the sea-based Aegis SM-3 and the ground-based Patriot PAC-3.[10]

Japan purchased some of its BMD assets from the United States. The Japanese procurement of the Aegis BMD system was the first time a missile defense capability produced by the U.S. Missile Defense Agency was sold to a military ally.[11] In addition to Foreign Military Sales, the two countries also negotiated a deal to allow Japan licensed production of BMD systems developed in the United States. Under this agreement, Mitsubishi Heavy Industries was able to produce PAC-3 interceptor missiles, which are produced in the United States by Lockheed Martin.[12] This PAC-3 system is said to be “the backbone of [Japan’s] BMD forces.”[13] Still, land-based BMD provides a relatively small area of coverage, and even though there are PAC-3 batteries deployed to protect Tokyo, much of the Japanese homeland remains vulnerable.

U.S.-Japan joint technological research and development on BMD continues. Currently, the two countries are co-developing SM-3 Block IIA interceptors to upgrade Aegis-equipped destroyers. The new interceptors, which will feature an increase in velocity, range, and divert capability, will be able to defeat longer-range ballistic missiles and are scheduled to be deployed in 2018. The two countries agreed to equitably share the financing and work on the project.[14] The U.S. government contracted with Raytheon, and the Japanese government contracted with Mitsubishi Heavy Industries.[15] Both companies were responsible for developing specific parts of the program. Co-production of the SM-3 Block IIA interceptors will proceed under licensed production similar to the PAC-3, where manufacturers in Japan produce equipment with technical assistance from American companies.

A key component of cooperation on BMD is real-time information sharing. The United States and Japan share early warning information and intelligence from forward deployed assets like ships and radar.[16] This improves target identification and tracking for both countries.

Finally, the U.S. military and Japan Self-Defense Forces participate in joint BMD training exercises to improve bilateral response capability and interoperability. Japan is the only country with which the United States has conducted kinetic BMD joint exercises[17]

This table shows both U.S. and Japanese budget allocations for co-development of the SM-3 Block IIA interceptor.

*Japanese budget figures have been converted from Yen to U.S. Dollars using the annual average exchange rate for the year the budget was appropriated.

In addition to improving sea-based missile defense with the SM-3 Block IIA interceptors, there are next generation upgrades for land-based BMD on the horizon. There are a few options for next steps, all with the goal of expanding the area of coverage for BMD in Japan. The United States is currently upgrading its own Patriot PAC-3 systems with the next generation Missile Segment Enhancement (MSE) interceptors. Once equipped with these advanced interceptor missiles, PAC-3 can be used to protect against cruise missiles in addition to ballistic missiles.[19] There is also some speculation that Japan may be interested in acquiring Aegis Ashore, which would deploy the capabilities from Aegis BMD ships in a ground configuration. Another option would be to purchase the Terminal High Altitude Area Defense (THAAD) system. Whichever system or combination of systems Japan decides to pursue, cooperation with the United States will be important, both in terms of procurement and achieving interoperability with U.S. forces in Japan.

BMD cooperation with Japan has increased U.S. national security by deterring missile threats in a region home to both American troops and allies. In addition to buying BMD systems from the United States, Japan has made a substantive technological and financial contributions to the development of next generation improvements to these systems that will help defeat and deter mutual threats. Joint development and co-production enhances capabilities for both nations and maximizes the defense budgets of both nations. During a time when the United States and Japan are each facing fiscal strain, making the most of each defense dollar is particularly important. The cost savings that come through defense technology cooperation represent greater alliance burden sharing with Japan.

Defense cooperation with Japan could provide a model for greater cost sharing with other U.S. allies. In recent years, the United States has co-developed missile defense systems with countries in Europe, such as Germany and Italy. The Department of Defense also has an initiative to accelerate defense cooperation with India, with co-development and co-production on the list of goals.[20] All of these partnerships represent steps toward closer cooperation and greater burden sharing with American allies. Given the strategic vulnerabilities inherent in joint development and production of weapons systems, however, this strategy should be reserved for the closest of allies.