The Congressional Review Act: A Primer and Regulations to Watch

In 2014 alone, regulators published more than $181 billion in new regulations. There is little doubt the president will impose yet another $100 billion tab on the American people in 2015.

Congress, however, does have legislative tools to address these controversial new rules. The Congressional Review Act (CRA), passed in 1996, allows legislators to introduce a resolution of disapproval to rescind a regulation. If successfully passed, the rule “may not be reissued in substantially the same form.” In practice, this would end the life of the regulation permanently.

Logistics of the CRA

AAF has data on costs, benefits and paperwork for all rulemakings published since 2008. Every regulation that imposes a private-sector burden, intergovernmental cost, or paperwork burden is recorded weekly on AAF’s website. The graph below details some of that data: total costs from 2008 to 2014. In short, the regulatory state is thriving. 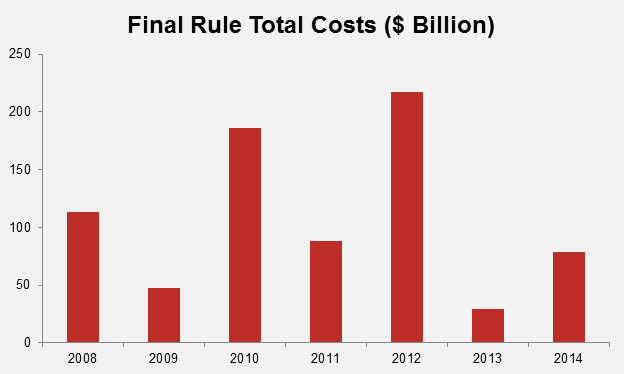 Regulators have published $760 billion in new regulatory costs during the last seven years, with $647 billion from the Obama administration. 2008 was a bit of an outlier, known as a “Lame Duck” year, when historically, administrations have worked quickly to finalize their regulatory priorities before the next president takes power.

To put the $760 billion in recent regulatory costs into perspective:

The CRA is an important oversight tool that Congress can use to check and delay regulatory overreach. There are other options as well: codifying executive orders on regulatory reform, appropriations riders, and piecemeal reform. Regardless of the specific tactics, there will be no shortage of controversial regulations for Congress to address this session.

The AI race is on. Countries, entrepreneurs, and firms across the globe are jockeying to capitalize on artificial intelligence (AI). While it has received…

A Menu of Options to Grow the Labor Force

Fannie Mae and Freddie Mac and the Need for Reform

The National Flood Insurance Program (NFIP) is nearly $25 billion in debt to American taxpayers. Most of that debt is a result of Hurricanes Katrina and…