It was a week with highs and lows in the regulatory world: an ozone proposal that could impose $15 billion in costs and a rule relieving $1.7 billion in burdens on truckers. Annualized costs were $13.9 billion, compared to $38.6 billion in benefits; paperwork declined by 45.2 million hours. 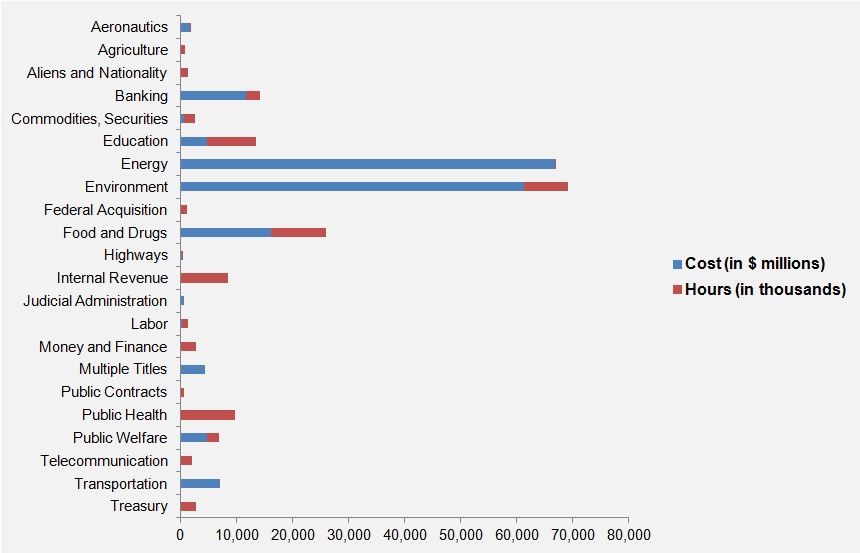 The headliner of the week was undoubtedly EPA’s proposal to set ozone standards between 65 and 70 parts per billion (ppb). The 65 ppb threshold could impose $15 billion in costs and generate $38 billion in benefits, along with 339,000 new paperwork burden hours. As AAF demonstrated, 100 state and national parks could be in danger of violating the new standards, even though they do not harbor heavy traffic or manufacturing bases.

The Department of Energy proposed new standards for residential dishwashers, a measure that could increase prices by $20 to $100 per unit. The administration estimates $7.1 billion in net present value costs, $413 million in annual burdens, and $558 million in benefits. The proposal’s analysis admitted that a majority of consumers who purchase standard dishwashers could bear higher net costs from their purchase.

The administration also published more than $3.1 billion in cuts to regulatory burdens this week and the leader was easily a final rule from the Department of Transportation (DOT) to remove 46 million hours of paperwork from the trucking industry. AAF reviewed the proposal here, which would cut $1.7 billion in costs, and reduce DOT’s paperwork burden by roughly 15 percent. This rule now puts 2014’s regulatory paperwork in the negative, an impressive feat considering more than $180 billion in regulatory costs.

Since passage, based on total lifetime costs of the regulations, the Affordable Care Act has imposed costs of $41.2 billion in state and private-sector burdens and 162.1 million annual paperwork hours.

Click here to view the total estimated revised costs from Dodd-Frank; since passage, the legislation has produced more than 63.8 million paperwork burden hours and imposed $32.7 billion in direct compliance costs. Based on calculations from the Financial Services Roundtable, Dodd-Frank regulations would require 31,940 employees to file federal paperwork.

Since January 1, the federal government has published $180.2 billion in compliance costs and has cut 3.8 million paperwork burden hours on net. Click here for our comprehensive database of regulations and rulemakings promulgated in 2014.