This week regulators published just $81 million in annual burdens. There were no reported benefits, but there were more than 2.5 million new paperwork burden hours. A rule from the Centers for Medicare and Medicaid Services (CMS) on overpayment led the week. 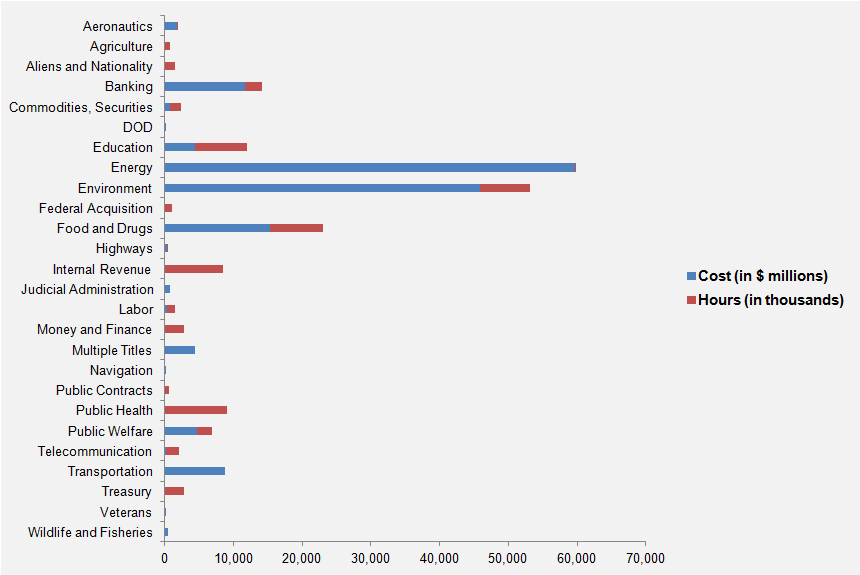 CMS’s 246-page final rule makes a number of amendments to Medicare and Medicaid by: 1) revising the outpatient prospective payment system, 2) updating hospital reporting, and 3) attempting to recoup overpayments from Medicare Advantage and Part D. The administration estimates a burden on hospitals of approximately $77 million, including more than 2.5 million paperwork burden hours.

Since passage, based on total lifetime costs of the regulations, the Affordable Care Act has imposed costs of $40.3 billion in state and private-sector burdens and 162.1 million annual paperwork hours.

Click here to view the total estimated revised costs from Dodd-Frank; since passage, the legislation has produced more than 63.8 million paperwork burden hours and imposed $32.7 billion in direct compliance costs. Based on calculations from the Financial Services Roundtable, Dodd-Frank regulations would require 31,940 employees to file federal paperwork.

There were three major changes in paperwork burdens, which is defined as an hourly burden increase or decrease of 500,000 hours or greater. The Internal Revenue Service finalized the largest, a 468 million-hour increase in paperwork.

Since January 1, the federal government has published $157.7 billion in compliance costs and has imposed 36.7 million in net paperwork burden hours. Click here for our comprehensive database of regulations and rulemakings promulgated in 2014.