There’s a narrative surrounding the House-passed Build Back Better Act’s (BBBA) drug policies suggesting that these provisions are more moderate and scaled back from what Democrats really wanted, as outlined previously in H.R. 3. For example, under H.R. 3, the government would have negotiated drug prices for the commercial market as well as for federal programs. The BBBA, on the other hand, only applies government negotiation to federal programs. But the BBBA would reach into private negotiations to effectively cap drug prices outside of government programs through its inflation penalty.

Among the many drug policies of the BBBA (discussed more fully here and here), the legislation would seek to prohibit drug companies from raising their prices above the rate of inflation. There are two pieces to the inflation penalty, one applied to Medicare Part D drugs and one for Medicare Part B drugs.

For drugs covered by Part D, the price of the drug would be set as the Average Manufacturer Price (AMP)—the average price paid by wholesalers, net of prompt pay discounts. A drug’s price will be benchmarked to October 2020, while inflation will be benchmarked to September 2021, forcing manufacturers to absorb the last year of high inflation. The penalty for increasing a drug’s price above inflation would be the entirety of the AMP amount above the inflation rate for all units sold, excluding drugs purchased through Medicaid. Drugmakers could still increase their prices above inflation, but they would have to write a check for the difference. For example, if a drug’s AMP was $110 per unit in October 2020, and the inflation-adjusted AMP in 2023 is $120, but the actual AMP is $130, the manufacturer would have to pay the government $10 for every unit sold in 2023. The Part D inflation cap applies to all drugs with a price of more than $100 per patient, per year.

In Part B, the principle is largely the same with a few differences. The price of the drug would be set as the Average Sales Price (ASP). ASP would be benchmarked to July 2021, while inflation would be benchmarked to September 2021, a less egregious version of would happen in Part D. While both penalties take effect in 2023, the Part B penalty is assessed quarterly, while the Part D penalty is paid annually. The penalty would be applied to all single-source drugs in Part B with costs exceeding $100 per patient, per year—and biologics would still be considered single source even if there are biosimilar competitors. Biosimilars would also be subject to penalties if their price is above that of the reference product.

There are really two key takeaways. The first, as stated above, is simply that the BBBA does effectively cap drug prices nationwide through the inflation penalty, representing an extraordinary expansion of government power into the private market. It’s simply not true that the BBBA’s drug policies don’t interfere in the private economy.

The second thing to observe is that by setting the inflation benchmark to a later date than the price benchmark, Democrats are able to obtain additional money to pay for the BBBA. If the policy benchmarked both drug price and inflation to September 2021, the Congressional Budget Office would likely assume that drugmakers would keep their price increases to the rate of inflation. There would be savings due to slower price growth over time, but they wouldn’t be huge. By capturing the recent inflation spike and back-dating drug prices far enough to ensure that pricing decisions already made are subject to the new policy, Democrats ensure that the score includes additional revenue from penalties, and that manufacturers have to pay for Democrats’ last year of inflationary spending policies.

Chart Review: Use of PCR Testing vs. Antigen Testing

As the COVID-19 pandemic shifts to an endemic, readily accessible testing provides a path to something close to normalcy. Two options for testing exist: polymerase chain reaction (PCR) tests and antigen rapid tests. PCR tests are more accurate, but require lab equipment, take about 48 hours for results, and are more expensive to conduct. Antigen tests are less accurate but are quick (results in as little as 15 minutes for some), easy to use, and relatively cheap. Unfortunately, antigen tests have been in short supply lately, in part due to a backlog of applications for new tests at the Food and Drug Administration, and prices have spiked due to demand. The chart illustrates data from Missouri, showing an increase in the use of antigen testing alongside a mild decline in the use of PCR testing. Missouri’s data were used because the state has been a leader in tracking testing and separating antigen versus PCR testing. It’s easy to see the demand trends for testing in Missouri; demand rose and fell with the 2020-2021 winter spike and the Delta variant. With the Omicron variant beginning to make its way throughout the United States, it seems demand for tests is beginning to rise again. Antigen tests themselves may be gaining in popularity relative to PCR tests simply due to greater availability (even with supply shortages) than before and consumers are opting for an easier, faster, hassle-free way to test. 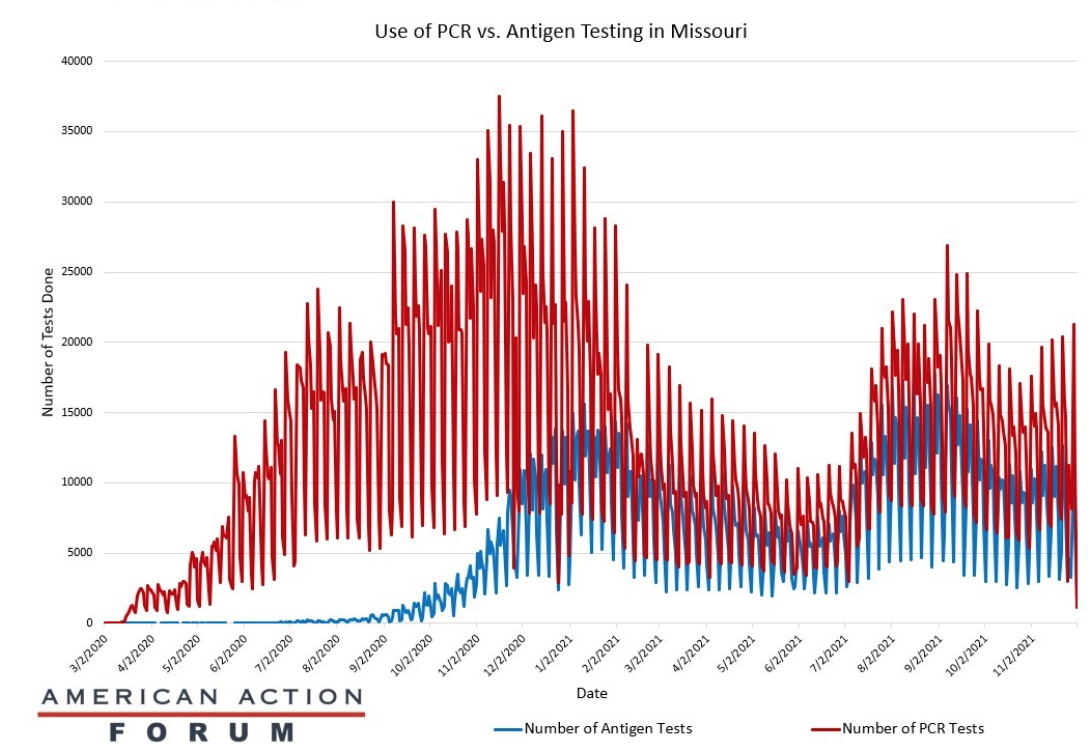 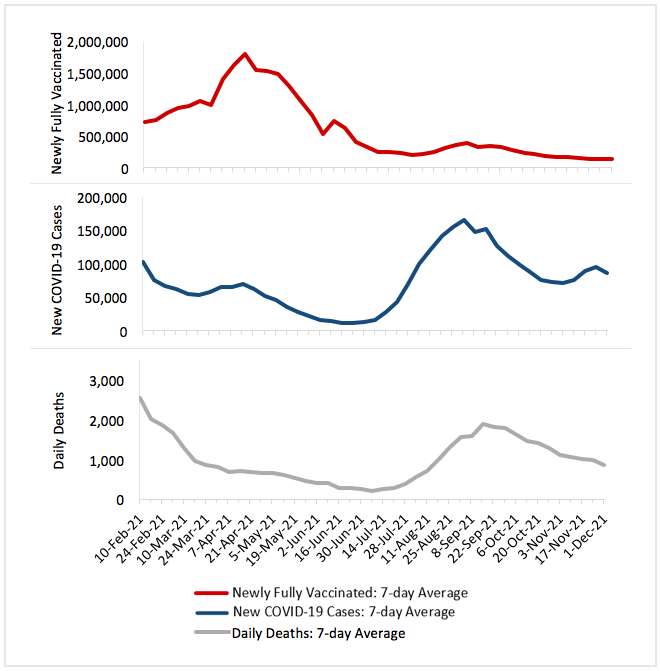